As a part of Blue Mountain’s 75th anniversary event, Celebrate 75, the resort will be holding a live auction on Saturday, January 21 to raise funds in support of the Special Olympics Alpine Team.

Along with the weekend’s family-friendly activities and entertainment, Blue Mountain has invited the community to take part in a live auction of 10 retired ski lift chairs each converted into stand-alone benches and featuring artwork created by local artists.

“The lift chairs themselves are a novel piece of Blue Mountain’s history,” notes Tara Lovell, Manager of Public Relations at Blue. “And the artwork on each chair is a one-of-a-kind tribute to winter in this area. Our hope is that community members are excited to bid on one and take it home while supporting a great cause”

Blue Mountain announced the Special Olympics Alpine team as their 75th anniversary charity of choice last year and the Resort will be donating all of the proceeds from the live auction directly to the Team.

“We have experienced tremendous support throughout our association with Blue,” says Terry Sears, Head Coach of the Blue Mountain Special Olympic Alpine Team. “Blue has been supporting our Team, which currently has 32 Athletes and some 43 coaches and volunteers, for nineteen years. During our 9-week season Blue provides great service and amazing support. Each year we’re proud to host an annual regional race competition at Blue as well. Needless to say, our team would have to be in constant fund raising mode if we didn’t have the resources Blue provides.”

The resort is hoping to raise over $5,000 for the team at the live auction on the 21st to help outfit the athletes, coaches and volunteers with new uniforms. “Previously only the athletes were provided with jackets while coaches and volunteers had to purchase jackets at cost price if they were able to,” Sears says. “My goal as head coach is to outfit everyone on the team with a new uniform as we enter our 20th anniversary next season.”

The lift chairs are currently on display throughout downtown Collingwood, Thornbury and in the Blue Mountain Village, all to be returned to the Village Plaza prior to the Celebrate 75 event next Saturday. The live auction will be held at 3:00 p.m. EST on the 21st. 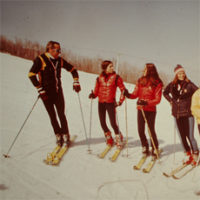