So many aspects of life in the mountains are affected by the weather, but few, if any, depend on a specific season and climate the way skiing and snowboarding do–winter sports require winter.

That sounds a bit simplistic, but the reality is disconcerting. According to Environment Canada, the average annual temperature across the country has warmed by 1.6 degrees Celsius since 1948. More locally, data from the University of British Columbia shows that average winter temperatures in the southern Coast Mountains rose around 1.5 degrees Celsius between 1901 and 2009, while precipitation dropped by between 200 and 400 millimetres over the same stretch of time. In the Coast Mountains, this has meant, on average, warmer and dryer winters. Which also means more of the precipitation that does fall, is coming down as rain instead of snow.

Despite this, winter sports in the Coast Mountains are on the rise, and in January 2016, the $3.5 billion Garibaldi at Squamish (GAS) resort proposal was granted an environmental assessment certificate by the British Columbia government. During the review, it was noted that the GAS proposal hadn’t factored in the potential impacts of climate change, and while the certificate lays out 40 conditions for the project, climate change is considered “outside the scope of the assessment.”

“Fourteen of the hottest years on record have occurred since 2000.” – World UN Meteorological Organization

While many Sea-to-Sky locals ponder how winter can be an afterthought for a ski resort, industry reaction towards GAS has also been mixed. In a June 2015 interview with Whistler’s Pique Newsmagazine, Jeff Lynn, CEO of the 300-member Canada West Ski Area Association, expressed doubts about GAS’s viability in a climate-changed future. “We have to look forward,” he said. “What resort should you be approving today in order to have a strong ski industry 50 years from now?”

Whether Garibaldi at Squamish will fit that bill, or ever be built, remains to be seen, but there’s no denying Coast Mountains ski resorts are feeling, and dealing with, the reality of climate change.

Mid-Mountain Blues
The first casualty of climate change will be all of your favourite lower elevation ski runs. The winter of 2014/15 offers a perfect example of this: dismal snowfall and soaring temperatures swept the province and while bigalpine resorts like Whistler Blackcomb (elevation 2,184 metres/7,165 feet) were able to salvage the season thanks to their terrain above treeline, smaller resorts suffered.

Vancouver’s Mount Seymour (elevation 1,265 metres/4,754 feet) only managed to be fully open, with all lifts operating, for 12 days of the season. For Brent Hillier, an avalanche instructor and former ski patroller at Mount Seymour, that winter “was a prime example of what climate change is doing to our snowpack. Many of my friends and former colleagues at the resort were out of work. Personally, if it weren’t for the fact that I could work more in the Whistler Valley, that winter would have seen me unemployed.” 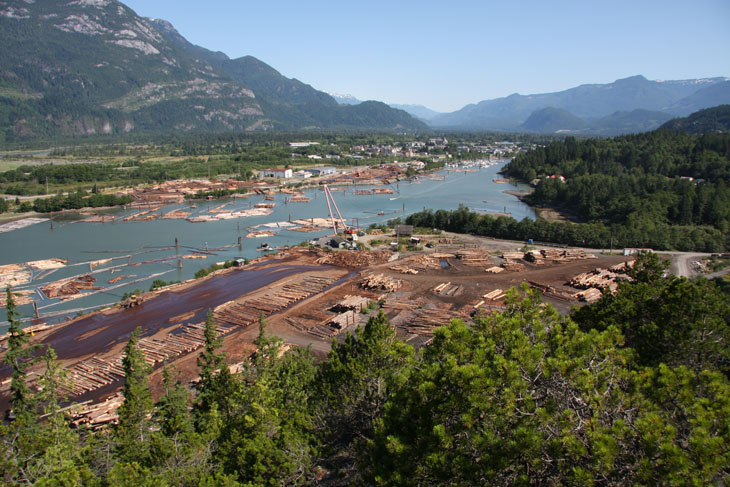 Brohm Ridge, proposed site of Garibaldi at Squamish, sits just above treeline at 1,945 metres/6,381 feet. Snow conditions in the area can be so variable that a 1974 report prepared for the Province of British Columbia’s Department of Municipal Affairs deemed it an “unacceptable site for a modern ski resort complex.”

On-Slope Uncertainty
Shorter, warmer winters with less snow down low are not the only way that climate change can wreak havoc in the mountains. Pascal Haegli, head of Avalanche Risk Management research at the Simon Fraser School of Resource and Environmental Management, points to the volatility from year to year as a major concern for both resorts and recreational users.

“Reduced and more sporadic snowpack at lower elevations is a big challenge for operators and resorts,” Haegli says. “A bigger challenge [for users] will be getting used to treating each winter like a different regime. Lines that were perfectly fine to ski one winter might not be appropriate the next winter.”

If Garibaldi at Squamish had been operating in the last two years, it would have offered little to no skiing. But the project’s proponents say they’re ready for the challenges ahead.

And the impacts are even greater in the backcountry. On big snow years, the terrain surrounding Brohm Ridge is popular for backcountry enthusiasts, but accessing that terrain requires specialized equipment and knowledge. Many worry that ski lift access and increased use could make it easier for inexperienced adventurers to get into trouble. Working as an avalanche professional, Brent Hillier has seen the impacts of climate change beyond the ski area boundary first-hand. “Climate change creates huge fluctuations in weather,” he says. “If you put these weather events in the right order, the results can be huge avalanches. The winter of 2013/14 showed us what kind of activity an extreme melt-freeze cycle followed by a six-week drought and capped off with a couple metres of snowfall can produce.”

In February 2014, BC’s Coquihalla Highway was closed by successive avalanches that, according to the BC Ministry of Transportation, ran on slide paths that had never reached the road in any of the 27 years that the highway has been open. “If the future holds more extreme weather, then these major avalanche cycles might increase as well,” Hillier says.

Rising to the Challenge
Of course, a single bad winter does not make a trend, but according to Chris Steinkamp of Protect Our Winters (POW), everyone needs to be preparing for more winters like 2014/15, not fewer. Protect Our Winters is a non-profit organization founded by snowboard legend Jeremy Jones to “mobilize the outdoor community to fight climate change.” Steinkamp says, “Based on what we know from the science and research, winter is going to become warmer, wetter and shorter over the next decade or two,” he explains, pointing to a report his organization co-released in 2015 with the United States environmental policy powerhouse, National Resources Defence Council. “The challenge for us now is how bad are we going to let it get?”

Steinkamp and POW have been working with ski resorts to tackle climate change on both an adaptation and a policy front. It hasn’t been an easy path, but across North America, Steinkamp is seeing some resorts start to take the challenges seriously, like Whistler Blackcomb.

The UN Meteorological quote at the top of this story comes from Conflicted Obsessions, a video in Whistler Blackcomb’s “Big Picture” series that examines some of the issues, as well as the future of winter sports. “How can we keep doing what we passionately love to do, but in a way that the planet can be healthy?” asks WB Planning and Environmental Manager Arthur De Jong in the video. “It’s not healthy right now, that is the challenge. This is not about future generations; this generation has to resolve this question.”

The answers won’t come easily, but Whistler appears to be taking the questions seriously. Dave Brownlie, President and CEO of Whistler Blackcomb, says sustainability is being “incorporated in all aspects of business” with a “team dedicated to achieving the highest possible levels of sustainability across all areas of the organization.”

“At times, we take all our enjoyment, our careers and our passions from the mountains without giving anything back. It’s a one-way relationship with the mountains and winter.” – Tamo Campos

But even the most impressive sustainability strategy can’t insulate Whistler Blackcomb from the impacts of a changing climate. In April 2016, they announced a $364-billion “Rennaisance Project” aiming to render the mountain “weather independent.” “The potential impacts of climate change create a need to adapt by diversifying the experiences Whistler Blackcomb offers and by mitigating the effects of shifting weather patterns,” Brownlie says.

Steinkamp agrees diversification is needed, but adds that more action is needed. “If we take meaningful action to reduce carbon now, it’ll pay off for the next generation,” he says. “The trend as we see it will need to be a full-court press by everyone in outdoor sports against carbon emissions at home and work, at the resort and at the policy level.”

The Future of GAS
After the snow-challenged season of 2014/15, Whistler Blackcomb submitted a letter as part of the environmental assessment process that said, “The fact that climatological data still has not been provided by the proponent is alarming. If Garibaldi at Squamish had been operating in the last two years, it would have offered little to no skiing.”

But the project’s proponents say they’re ready for the challenges ahead. Speaking to the CBC following the resort’s environmental approval, Aquilini Investment Group vice president Jim Chu explained, “We’re aware of what’s happening with resorts around North America and around the world… if winter rolls around and there’s no snow, we’re prepared for that.” 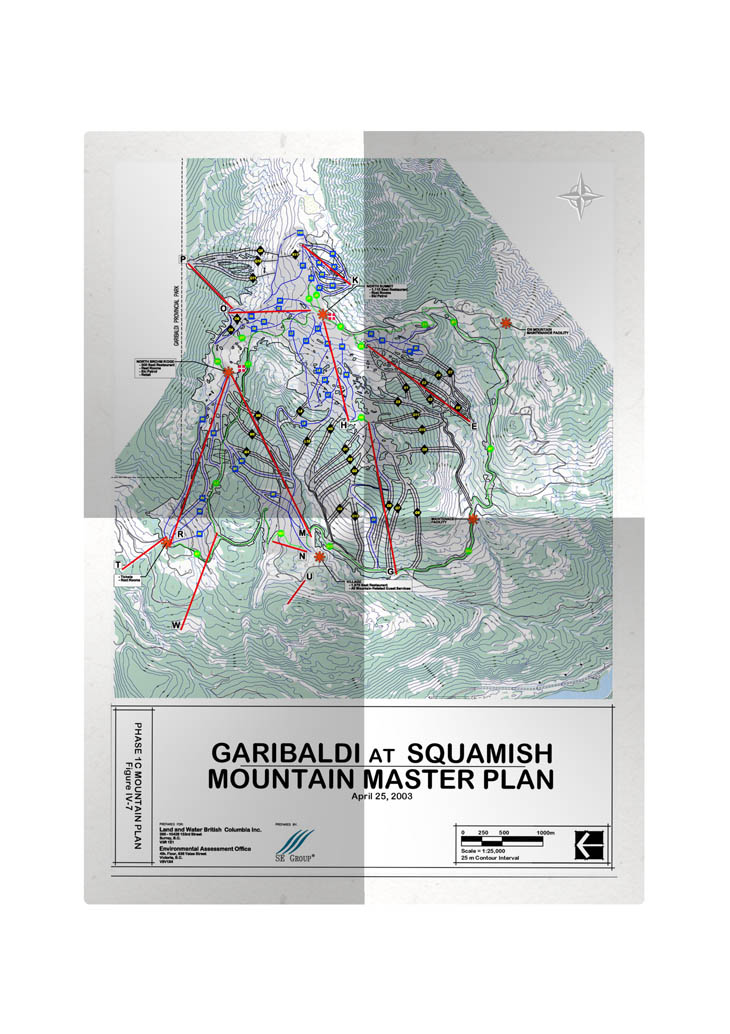 According to the proposal, these preparations hinge on the resort becoming a four-season destination. The revised project description from July 2014 mentions two golf courses, housing, hotels, multi-use trails, hiking and mountain biking. Like Chris Steinkamp, Beyond Boarding co-founder Tamo Campos thinks the challenges climate change poses to skiing and snowboarding speak to something deeper. “At times, we take all our enjoyment, our careers and our passions from the mountains without giving anything back,” Campos says. “In many ways it becomes just as extractive as the very fossil fuel industries leading us towards climate chaos. It’s a oneway relationship with the mountains and winter.”

Regardless of what happens with Garibaldi at Squamish, climate change raises a crucial question for everyone who chases winter–what will the mountains look like in twenty years, let alone in fifty? And what role can we play in that future? “I started skiing when I was five years old, it’s in my blood,” says Steinkamp. “I want my kids to be able to have the same experience”.