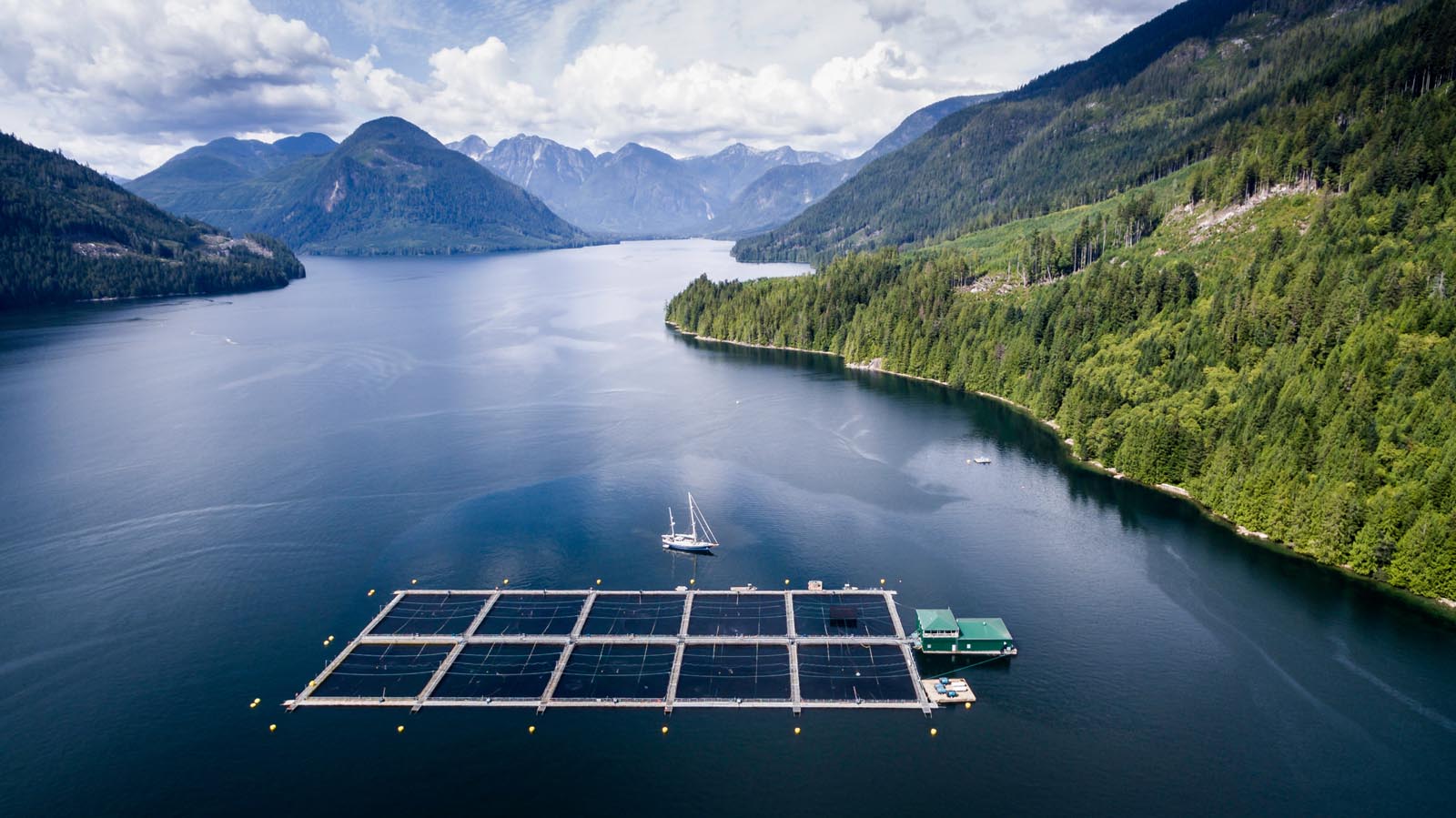 In our Summer 2010 issue we ran a story about foreign-owned, open net fish farms in BC waters and the harmful effects they have on wild salmon populations. Back then, marine biologist Alexandra Morton was leading the charge to bring awareness about the dangers of pathogens, disease and parasites that pass through the nets of fish farm “feedlots” and into wild salmon populations as they pass farm after farm on their migration to and from rivers.

At the time, the Provincial Government and Federal Department of Fisheries seemed uninterested in discussing Morton’s research or the concerns she raised. But Alexandra Morton has not given up. Last summer, the Sea Sheppard Conservation Society loaned Alexandra the Martin Sheen RV, a fully-crewed 80-foot sailboat/research vessel, to assist in her research.

With Beyond Boarding filmmaker Tamo Campos on board, Alexandra and the Martin Sheen crew examined every salmon farm between Vancouver and Port Hardy (northern Vancouver Island). They met with the Musgamagw Dzawada’enuxw First Nations, who have been fighting fish farms on their traditional lands in the Broughton Archipelago for close to 30 years. We caught up with Tamo and Alexandra to talk about their summer on the water and what they learned about an issue that could have devastating effects on British Columbia’s future.

Alexandra, it’s been six years since we talked last, what has changed?
Alexandra Morton: Nothing has really changed since 2010. I know more about the problem because now I am studying viruses, before it was just sea lice. A couple of days ago I sued the Ministry of Fisheries for breaking the law by not testing for the piscine reo-virus in the farm salmon that are being put in our waters. It’s illegal under Section 56 of the Fisheries Act; you can’t put fish in the water if they have a disease agent. But it’s happening.

You spent some time on some of the actual farms this summer, right? What did you see?
Alexandra: When you stand on a farm and look straight down, you see thousands of lethargic fish finning just the surface, and hundreds laying on the surface with their fins showing. This is the behaviour of sick fish. And if this is caused by disease, it is pouring out of the pens. It’s a good guess that what harms salmon in the pens is going to threaten wild fish outside the pen. And if not, then let’s see scientific evidence that it isn’t happening. Instead, Marine Harvest [the biggest global fish farm owners] is suing me for trespassing. What that tells me is this industry can’t handle being looked at. No fish farm company will allow samples of the fish in their pens to be taken for independent testing, and yet they claim nothing is wrong. In my view, that’s dishonest. There is something very wrong with the fish in their pens and meanwhile, for the Fraser River sockeye salmon run swimming past these farms, this year is the worst ever recorded.

Is the industry working on these problems themselves at all? I read about hydrogen peroxide baths to prevent sea lice?
Tamo Campos: You know how it is. The work Alex is doing is poking real holes in this industry so they are trying to respond with Band-Aid half-solutions and propaganda. Meanwhile, they are getting free open-sea sewage and the farm fish are eating wild fish, which is an illegal bycatch.

Farmed fish are eating wild fish?
Alexandra: Yes, I filmed wild fish trapped in the pens and being attacked and eaten by the farm fish. Furthermore, one of our crew dove in and swam around outside the farm nets. There were thousands of juvenile herring behaving like addicts. When the farm feeders turned on they made a humming sound and the herring rushed into the nets to feed on what looked like the dust particles from the feed pellets. After the feeders shut down the herring would move away, only to rush back at the next feeding. So you have herring not migrating, not eating a natural diet and not acting like normal herring.

“Spawning salmon are like the red veins that give life to the entire West Coast. They pump the blood into everything that BC holds dear.” – Tamo Campos

Tamo: Some [fish farm] workers, off record, said that after the spring smelt and oolichan runs, they would stop the feeding machines because the farm salmon were eating so many wild fish. Meanwhile the government gives these foreign-owned farms tax subsidies as an insurance policy if their fish die off.

You met with the Musgamagw Dzawada’enuxw First Nations. There have been farms operating in their territory against their wishes for years, right?
Alexandra: There are close to 100 fish farms in BC and one third of them are in Musgamagw Dzawada’enuxw territory. Most nations have signed contracts with the industry, but they have not, they are unique. They’ve been saying “no” for 29 years. And they’re right to be concerned, they’re losing their fish. I’ve done 26 years of research in their territory and last year they lost 39 per cent of the juvenile salmon leaving their territory to lice from fish farms. I co-published this reseach in the Canadian Journal of Fisheries and Aquatic Sciences. When Paul Watson gave me the Martin Sheen I brought the boat to the Musgamagw Dzawada’enuxw so they would have the opportunity to speak to the world about this issue. They know the value of wild fish.

Tamo: For me, I always feel that the most important voices are the ones most affected by the issue. For the natural gas plant on Lelu Island it was the Gitwilgyoots, in the Sacred Headwaters it was the Talhtan, with these fish farms it’s the Musgamagw Dzawada’enuxw. And they are losing the essence of their lives. These people will face the brunt of the forces and if we want to understand the situation best we should be listening to them. If we lift their voices up, we have a much more systematic solution.

Alexandra: The leadership I saw this summer was astonishing. First Nations have literally been attacked, but they are so tied to the land that they never say, ‘if it gets worse I am leaving.’ I have never heard anyone say that. The people and the place are so entwined they can’t imagine living without the river, fish and ocean. First Nations are the only hope I see for this and many issues faced by humanity. We don’t see non-native towns standing united against the destruction of our earth.

In 2010, we talked about fully contained fish farms on land. That seems like an obvious solution, is it working?
Alexandra: Yes. The ‘Namgis First Nation of Alert Bay, BC run Kuterra, a closed tank, on-land salmon farm that is selling fish in grocery stores now. Google it. There are solutions that are working and they are making money. But for some reason, we are slaves to these three Norwegian companies riding roughshod over communities and fishermen and fish. It doesn’t make sense, there must be some foul deal high up at a government level, because this has been gong on for so long. New governments make all kinds of promises, then they get elected and fall in line. The federal government just approved another salmon farm! The company Grieg Seafood tried to give the local fishermen $20,000 each to shut them up, they said “no” but a year later the Trudeau government quietly approved it. No one has been able to stop this highly destructive take-over of the BC coast.

“Last year, the Musgamagw Dzawada’enuxw territory has lost lost 39 per cent of the juvenile salmon leaving their territory to lice from fish farms.” – Alexandra Morton

What was it like to spend the summer on an 80-foot Sea Sheppard sailboat and get to work with each other?
Alexandra: When the Sea Sheppard shows up people know it is serious. The crew of the boat are so remarkable, they take time out of their lives and get on a boat for free and try to go save something. It was remarkable and I learned so much. Tamo, too, he made 32 films in 50 days and has this incredible energy. Tamo has been on the front line of so many indigenous uprisings and people taking a stand, he becomes a thread that brings the stories of the elders in all these communities to each other. It’s so important to understand the fight that goes on in other places because it makes what we do feel more normal. It’s frightening to stand up into the crosshairs of corporations and governments, but we are fighting for life on earth. We’re not exceptional, there are people fighting for life everywhere. But its come to the point where we are not fighting for ‘the environment,’ that is outdated. We are fighting for our lives.

Tamo: It was badass to work under Alex and witness her strength and conviction. We need independent science in this day and age, and more scientists standing up for their research. Alex is the Jane Goodall of wild salmon, which is a way more foundational species than chimpanzees. The Fraser River salmon run is one of the largest animal migrations in the world. If we don’t have salmon, we don’t have bears, trees, eagles. Spawning salmon are like the red veins that give life to the entire West Coast. They pump the blood into everything that BC holds dear.