Throughout the ’80s and early ’90s, backcountry snowboarding was an awkward affair. Access was extremely difficult, and unless you were stepping out of a snowcat, helicopter, or ducking the rope directly beside the resort, you were kinda screwed. Of course you could bootpack, which is a huge part of snowboarding’s roots, but walking balls-deep through the snow is a horribly inefficient way to cover long distances. Snowshoes were, and still are, an option, but as anyone who ever tried to use them on something like the Spearhead Traverse can attest; the results can be comical at best.

In the late ’90s, a Whistler local named Scott Fennell created YUPIs, a flat-based snowshoe that used traditional climbing skins. With their ability to glide, they were better than snowshoes and were a fairly common sight in the local backcountry, but they didn’t revolutionize the sport.

Instead, the standard device for backcountry snowboard travel was created by Utah Forest Service avalanche forecaster Brett “Cowboy” Kobernik and Mark “Wally” Wariakos, owner of Voile Backcountry Manufacturing.  Cowboy started tinkering in his basement in 1991 and eventually approached Wally with the design that’s still largely in use today. In 1994, Voile released the first splitboard available for purchase by the public.

However, snowboarders can be a tough demographic to engage, with mob mentality gravitating only towards what’s considered to be cool at the time (Mambosoks!). Voile’s initial board design, which had a massive gap running down the centre, was mocked by the masses.

It wasn’t until endemic snowboard companies picked up on the emerging trend that people started paying attention. Dave Downing helped muffle the naysayers by filming his entire segment, a healthy mix of big mountain freeriding and backcountry booters in Standard Films’ TB9 (2000), on a Burton splitboard. And the new subsection of snowboarding began getting the street credit needed to plow its way into the mainstream.

Meanwhile, at Whistler-based Prior snowboards, founder Chris Prior was introduced to splitboards in the mid-90s, by a wide-eyed believer who showed up at his original shop in North Vancouver.

“A fellow from Pemberton came in frothing at the mouth saying, ‘this is the best thing since sliced bread. Cut my board in two!’” Prior recalls.  “I thought he was nuts but he said, ‘no, this is it, this is happening, this is the future.’”

Prior split their first board in 1997, moved their factory to Whistler in 1999 and officially introduced splitboards to their line in 2002 after putting in enough R&D to offer people a product that performed at a level the local mountains required. And they opted for the straightforwardness of the Voile reattachment design.

“The Voile was a really simple system that worked,” Prior says. That combination of function and performance, alongside Prior’s core legitimacy within the snowboard world, got the attention of backcountry snowboarders, and just like that wide-eyed guy proclaimed, splitboards were suddenly the future.

According to figures provided by SnowSports Industries America, splitboard sales for 2015–16 actually matched alpine touring ski sales (roughly 4,450 units).  “[Splitboarding] became the only growth part of the snowboard industry; the industry was flat and the backcountry was expanding,” explains Prior.

Really though, the growth is only natural because the once-niche activity has done something for the sport of snowboarding, as a whole, that can’t be undone. Splitboarding has effectively eliminated every disadvantage that snowboarders used to face in the backcountry.

Even the Association of Canadian Mountain Guides, one of the most reactionary organizations in snowsports, has accepted splitboarders into their guide programs. In 2006, Scott Newsome became the first snowboarder to pass the ACMG’s Assistant Ski Guide exam (he went on to get his full ticket in 2011). Since then, guiding has been an attainable profession for any knuckle dragger with the wherewithal to safely move a group of people through the mountains.

The split revolution was ultimately picked up by Jeremy Jones and his merry band of maniacs: guys like Jonaven Moore, Ryland Bell, Forrest Shearer, Lucas Debari and Xavier de Le Rue, with the Deeper, Further, Higher film trilogy that touted a message as clear as the bluebird days in the movies – you don’t need helicopters, snowcats or snowmobiles to get rad in the backcountry. Once the pros showcased what was possible, the trend began to snowball.

Former Halfpipe Olympian Justin Lamoureux is an ACMG Assistant Splitboard Guide who, in 2014, ascended and rode all of the mountains he could see from his Squamish home. All 30 of them, plus another nine that were in the same general area.

“There’s no limit to what you think you can do,” says Lamoureux. “When you start splitboarding you’re basically learning a new sport. You need to learn avalanche skills, how to read and move in the terrain and how to use your equipment.” Lamoureux warns that part of the process is realizing that splitboards aren’t a magic carpet ride to the top. “You will earn your turns, but I guarantee you’ll remember every single run and adventure on a splitboard.”

Two and a half decades after its inception, a lot of splitboarding’s evolution has come in the form of binding advancements. Spark R&D, based out of Bozeman, Montana, released a binding system in 2006 that sits flush over the splitboard. The original system, which involved a traditional set of bindings mounted on a set of plates that slid onto a set of pucks, was super heavy and forced the rider to be raised above the board.

“We’re really happy with how the bindings have progressed,” says Prior. “It’s improved the overall performance of a board tenfold.” A few other companies have followed suit, including Burton, Karakoram and Voile. There’s also a growing number of splitters who are opting for a hard boot set-up, using a set of Dynafit toe-pieces for the way up and something that resembles an alpine racing set-up for the way down.

The backcountry’s a big place though. You just have to head to the next valley over. But if you get there and find a couple of ski tracks on the way up and snowboard tracks on the way down, you’ll know what happened. 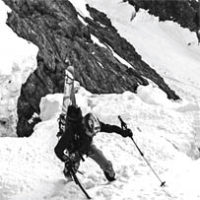 BIG LINE HUNTING: TRACKING FIRST DESCENTS IN THE CAUCASUS RANGE
My feet seem to be on solid ground and I can still see the sky. I seem to be in one piece—skis on my pack, ice axes in hand, crampons still attached—but I’m at the bottom of a crevasse on a remote mountain in the Republic of Georgia, partway up a route that’s only been climbed twice in the last 50 years. I laugh, shake my head and decide that it could have been much worse and my predicament perfectly illustrates the golden rule of skiing first descents: always expect the unexpected. I sink in an axe and start the climb out – with another 800 metres of climbing and 2,000 metres of skiing ahead, I have no time to waste… Read more