For local mountain bikers, there’s a mecca of trails on top of the Niagara Escarpment. It’s called Three Stage. Many consider it hallowed ground. For some it’s like a second home. They know every root, every rock, every climb and every descent. And there’s a lot of trail in there.

But it wasn’t always that way. The peaceful noise of freewheels clicking and riders yipping used to be something else entirely. In the late seventies and early eighties Three Stage was synonymous with the sound of engines: dirt bikes and four-wheel-drive trucks ruthlessly tore up the terrain. These days it would be considered an environmental disaster. But back then it was just fun.

“It was a free-for-all on dirt bikes,” remembers longtime local Bill Ford. “They used to have four-wheel-drive rallies up there. My buddy had a Ford F-250; we used to go up there and watch a lot of local guys racing in this mud bog.”

And that’s where the name stems from. If you know Three Stage well, you’ll know where the fire pit is (although there’s no pit there anymore). It offers a great view of Collingwood and Georgian Bay, but back in those days, there was really no vegetation. To get to the fire pit from below was a gruelling climb on the dirt bike with ‘three stages’ of hill. That’s been its namesake ever since.

“That’s kind of where everyone met,” remembers Ford. “That was a party pit. We used to go up there in high school. Lots of high school guzzling went on there.”

“In other words, it was out with gas power and in with pedal power.”

At the time, mountain biking was in its infancy. Guys like Charlie Kelly, Tom Ritchey and Gary Fisher were more or less inventing the sport out on Mount Tamalpais in San Francisco. Joe Breeze built what many consider the first purpose-built mountain bike in 1978. So it took a bit of time for these kinds of bikes to arrive in Canada. And it coincided with the crown land of Three Stage becoming Pretty River Valley Provincial Park in 1985. In other words, it was out with gas power and in with pedal power.

“I got my first bike in ’84 and moved up here in ’85,” remembers Ford. “I had a Norco Conquest. Which was a top-of-the-line bike. We bought three of them. Beautiful bikes. Suntour [components], all sealed bearings. No suspension. So things were different; we stuck to the doubletrack. There were hiking trails in there. We started making trails, just kicking sticks, trying to make short cuts.”

And it was Ford who found the underwear that became the namesake of an infamous uphill.

“Riding along there was a set of old, grungy undies, just sitting there. And back in those days, bikes were higher-geared, they didn’t climb worth a shit. So I got a stick and grabbed the undies. Gerry Goloski, Jim Twining and a couple other guys were trying to make it up the hill. Twining made it the furthest because he was the smallest, so we got the stick, and stuck the undies in the ground to mark where he got to. Until next time, when someone made it a little further. They swung there in the woods for a couple months or something. Gradually as people made it up further, the undies moved up until they were finally at the top.”

The trail has been known as Underpanty Hill ever since. 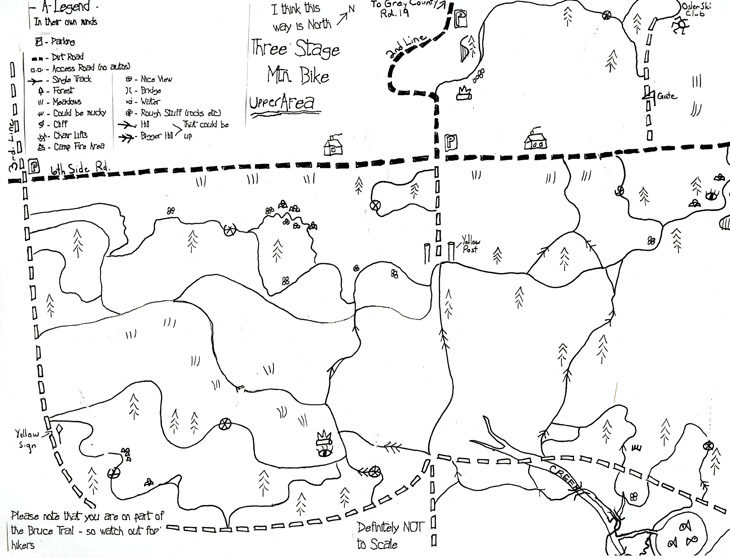 While Ford and his friends kicked a few trails in here and there, they mostly rode the existing doubletrack and the Bruce Trail. It wasn’t until the mid-nineties that guys like Terry Gibson started cutting purpose-built singletrack. Gibson, who’s known as Sweary Terry at Collingwood’s Kamikaze Bikes, just celebrated his 70th birthday. We should all wish to be as fit as Terry at 70. “In the mid-to-late nineties the only trails we had were the Bruce Trail and a lot of doubletrack,” he recalls. “So we started carving some singletrack. It was Lori Mackie, Cam Halliday and myself. We were reading about singletrack this and singletrack that all over the place, we were madly into that. So we just decided to do it. We tried to do it so it was sustainable with water run-off. I don’t think we ever cut a tree down. We’d just find a way around them. We had no suspension so we were looking for flowy trails, not that techy. We didn’t know what we were doing, but figured, ‘How hard can it be?’” To this day that early singletrack is the backbone of the trail system at Three Stage.

“I couldn’t go in there without stopping to fix something. It drove me nuts. Now I let someone else get to it.” —Terry Gibson

“It was probably around 2002 when I put the first technical trail in,” says Gibson. “And Kamikaze [Bikes] loved that because every weekend guys would be breaking crank arms, busting up chainrings and derailleurs.” For Gibson, the Millennium Trail was the last trail he built. “The Millennium Trail goes down almost to Underpanty Hill. It’s a high-speed rock n’ roll trail. After that it was just maintenance,” he says. “I couldn’t go in there without stopping to fix something. It drove me nuts. Now I let someone else get to it.”

And there are other guys to do it. “Some guys went in after me, putting in trails around the top, a guy called Todd, I don’t know his last name, I haven’t seen him for years, he’d be in there,” adds Gibson. “Sometimes I’d go ride in the morning, I’d see his car there, I’d come back at night and he’d still be there. He spent a lot of time in there.”

The list of names of people building trail grows every year. Guys like Bill Tucker, Harry Cummings and Steve Varga have all put in their hours. Over time, as the trails have packed in, they’ve become wider and smoother than ever before. And the tales of feral pigs, the naked man and poker runs have attained mythical status as they’ve passed from one generation to the next. The constant is that someone is always willing to add a new trail, maintain an old one and keep the dream of an incredible singletrack mountain biking destination alive.

“Over the years I’ve ridden everywhere,” says Gibson, “and I mean everywhere. I’ve travelled a lot. I was on the road trucking and I’d always have my bike with me. I’ve biked in Arizona, Utah, Colorado, California; I’ve hit them all. I’ve always said the trails around here can compare with trails anywhere. And that’s not just the trails I put in, but the trails that have been added since then. It’s a fabulous network.”

To the Three Stage trail builders of past, present and future, we here at Mountain Life salute you. There is little doubt that these are some of the best mountain bike trails in Ontario.