After a two year sabbatical from filming with Matchstick Productions, last season Eric Hjorleifson reunited with the team for what would turn out to be one of his most enjoyable and successful ski filming seasons in the past few years.

Hoji joined MSP for three trips, starting with his home away from home Golden Alpine Holidays, then Revelstoke with Selkirk Tangiers Heliskiing, and finishing with a park shoot at Whistler Blackcomb. 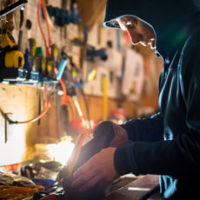 THE OPEN CAGE: INSIDE ERIC HJORLEIFSON
It’s a typical October afternoon in Whistler: blowing leaves and rain, not quite Halloween, but still too warm for snow. It’s a time of year best suited to taking a surf trip, and most local ski pros do just that. Not Eric Hjorleifson though, he’s at home rebuilding his chairlift. Later on, he’ll probably go down to the workshop he built in his Whistler townhome’s storage locker and tinker with the future of ski touring boots. If all goes well, he might be down there all night… Read more