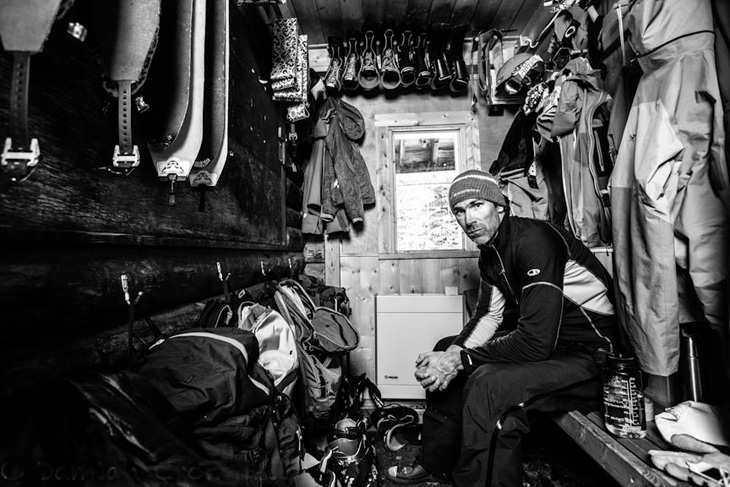 We talk to photographer Damien Cromwell about that time he went skiing with hockey legend Trevor Linden.

Trevor Linden is probably the greatest hockey hero British Columbia has ever known. Where are you guys in this shot? What’s going on?
We are up at the McGillivray Pass Lodge at Whitecap Alpine. It’s way out in the middle of nowhere, you fly in from Darcy. This is the boot room and entrance to the lodge. We just got in from a day of skiing and Linden doesn’t have a gear guy like when he was playing hockey so now he does it himself.

This is a different scene than we’d usually see of Trevor Linden sitting on the bench.
Totally. I don’t know hockey but I saw that bench and it was cool how opposite this was from sitting on the bench in a huge arena. He seemed super at-peace and I liked how it was just him and the gear with no teammates or crowd.

“I don’t know hockey but I saw that bench and it was cool how opposite this was from sitting on the bench in a huge arena.”

The gear is key too. To anyone who has been in a hockey dressing room, it doesn’t look that different.
Yeah, the boot liners in the top kinda look like skates. The hanging skins are lined up like sticks would be. Lots of big bags.

Here’s a guy who was an NHL captain and All-Star. He would have had cameras thrust in his face almost every night of his career. Was he different to shoot compared to a regular action sports athlete?
Not really. He is a humble guy who really seems to have respect for the mountains and the people who live their lives in them. He was stoked because since we were shooting, we always got first tracks.

“He was definitely the strongest guy behind the guide when it came to touring. He is a lung, out the longest and out front when he could be, tough to keep up with.”

How was the skiing? Does Trevor Linden rip?
He was definitely the strongest guy behind the guide when it came to touring. He is a lung, out the longest and out front when he could be, tough to keep up with. The skiing was bluebird and boot-to-knee-deep pow. One cool thing he told me was that later in his career, he would be somewhere like Columbus, Ohio, sitting in the back of the bus punching up the Whistler Blackcomb snow report on his phone. He was stoked. He had only been skiing a few years but even then he had the vision to know where he wanted to be. 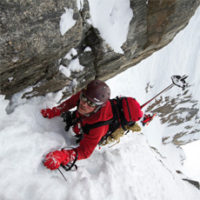 BEHIND THE PHOTO: JIMMY MARTINELLO
Jimmy Martinello is an Arc’teryx ambassador who has been exploring the Coast Mountains for over 20 years and has been a Mountain Life contributor since day one. He combines his love of adventure and photography to capture bold imagery while actively participating in a vast array of outdoor mountain pursuits… Read more