Mount Bute, tucked away at the end of the Bute Inlet on British Columbia’s central coast, is one of those fantastically remote mountains that few people will ever lay eyes on in their lifetime, let alone climb. But in July 2009 that’s exactly what three local climbers did.

by Feet Banks :: photos and captions by Jimmy Martinello

Born-and-raised Pemberton climber Jason Sinnes first saw Bute’s huge vertical western wall while heli-logging in the area. “He showed me a picture of it about ten years ago,” says Jimmy Martinello, “and ever since it has been our dream to climb that face.”

The dream became a reality thanks to the Mugs Stump Alpine Climbing Award, a memorial bursary established to help adventurers and climbers achieve big, expensive goals. With Mugs Stump’s help (and that of Mountain Equipment Co-op) Sinnes, Martinello and long-time Whistlerite Bruce Kay flew into Bute Inlet by float plane and got a bump up to the base of the mountain from a friend doing some heli-survey work in the area. 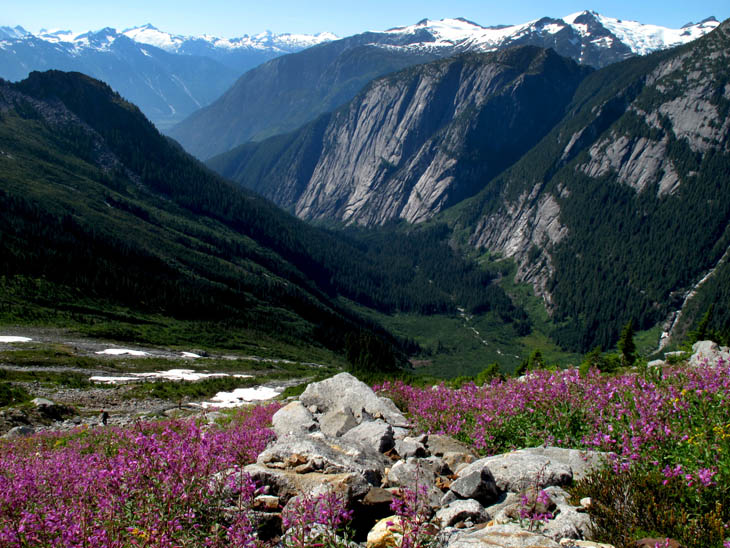 “The lower face of Mount Bute had never been climbed,” Martinello says. “Jason and I had been in there before. Three years ago we did a nine-hour bushwhack through devils club and slash alder to get to the base and then got rained out.”

This time around, the team was blessed with bluebird weather, and with over 6000 feet of rock climbing ahead of them it was essential to go fast and light.

“We took small day packs, minimal gear and light sleeping bags,” Martinello says; “We slept on ledges along the route. Everyone climbed superbly. The first night we ran out of water but after some more great climbing by Jason and Bruce we found some snow to melt by lunchtime on day two. The toughest part was just figuring out where the route would go.”

Night two on the wall was much more restful, set up with a majestic sunset over Bute Inlet. Morning dawned clear and blue and the climbers made a dash for the summit. “ We decided to go light as possible,” Martinello says. “The first few pitches were exciting ones. Everyone climbed really well, getting us through amazing corners, face climbing, friction and run-outs. The climbing kept getting better the higher we got.”

By 8:30 that evening they were on the summit, happy, proud, and over a mile straight above where they started. “We were all happy with our leads and proud of each other,” Martinello says. “It was such a treat just looking out to Waddington Range and at all the inlets that flow into these magnificent mountains, knowing we had reached our goal and honoured that the Mugs Stump foundation believed in us and our trip.”

But the first ascent celebration didn’t last long – the trio still had to get back to their stashed packs and gear. “We rappelled down in the dark and slept on the ropes that night.” Martinello recalls a massive wall rat trying to chew on Bruce’s climbing shoe throughout the night. “Who knows how he got up there. But he’s living in one of the most amazing places in BC.”