What began as a small film collective, the Scenic City Film Festival (formerly the Wild Lands Film Festival) has been hailed as an “essential” and “community-affirming” event by Globe and Mail columnist and renowned film/media critic Geoff Pevere.

Presented by the City of Owen Sound, the third annual SCFF is back for 2016 with a new name, a new venue, and a new weekend.

Kicking off September 9-10th at the Heartwood Concert Hall, the SCFF will continue to bring a unique blend of eclectic feature film programming, while aggressively campaigning to include an engaging programme of local Grey Bruce short films ranging from documentaries and animations, to narrative pieces, 16mm film, and digital mixed-media.

In years past, the SCFF has embraced all aspects of locality, ranging from film and music, to locally produced food and craft beers, helping to cement Owen Sound as an engaged and progressive artistic hub of near-northern Ontario.

For 2016, the festival has experienced a record number of local, national, and international short film submissions, and will feature the premiere Grey Bruce screening of KONELĪNE: our land beautiful, the winner of Best Canadian Feature Documentary at the 2016 Hot Docs International Documentary Festival, on Friday night. The film is a cinematic poem chalked full with exemplary cinematography by Van Royko, rich culture and song pulled from the traditional territory of BC’s Tahltan First Nation. Koneline’s star, Oscar Dennis, will join our MC’s – writer/broadcaster/activist David McLaren, and Poet Naturalist, Lenore Keeshig, on September 9th for an inspired Q&A session.

Proudly supported by local arts patrons, Christopher & Katherine Little, the festival will also boast a screening of renowned Canadian director, Guy Maddin’s, The Forbidden Room, as well as a downtown mixed media installation project by OCAD University Professor and Durham’s own Geoffrey Shea, in collaboration with the City of Owen Sound.

The local shorts program will take place on Saturday night, with local mustached troubadour Jon Farmer MC’ing and presenting the SCFF’s coveted canoe paddle awards. Guests will be entertained during intermission and after the award show by musical guests and Owen Sound duo, Woodworker.

Films are awarded democratically via our crowd voting process, and will include awards for the Best Local film, People’s Choice Award, and a Runner Up award. New for 2016 is the inclusion three student film projects selected from the Grey Bruce Youth Film Festival, which will premiere alongside the local shorts program on Saturday night.

Food will be on-site and made-to-order by returning culinary wood-fired wizards Those Pizza Guys, and local downtown favourites, Casero Kitchen Table and The Milk Maid.

For more information, follow the SCFF on Facebook and Instagram via @sceniccityfilmfest. Tickets are available at Heartwood Home in downtown Owen Sound for $15/event or $40 for a festival pass. 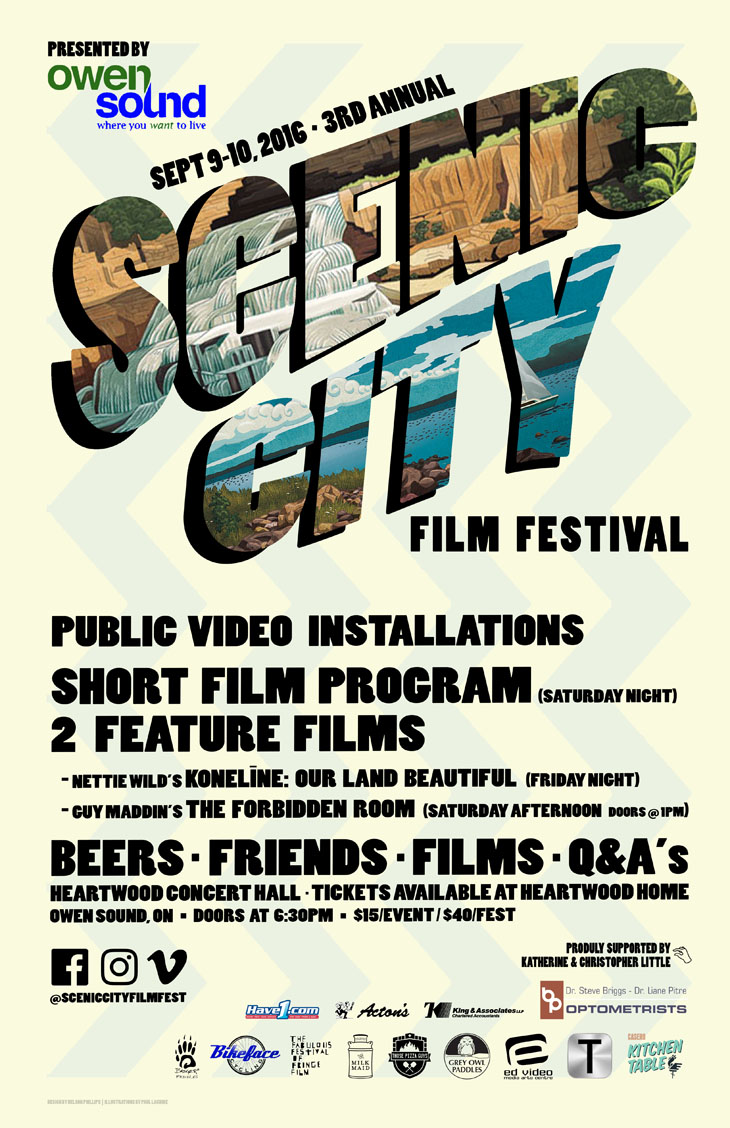