How much does Arianna Vegter love bikes? Well, enough to make the move from Barrie to “metropolitan” Redwing just to be closer to Blue Mountain’s Downhill trails and the region’s top cross-country options. The Knolly Bikes and Squire John’s-sponsored pro got her start in Downhill five years ago—going from barely riding a bike to winning the Canada Cup in 2012 and 2013. Recent finishes include Overall Race Series Champ, Eastern States Cup last fall, and 2nd place in the 2016 Vittoria ESC Atlantic Cup DH. Vegter is gratified to see an uptick in female Downhill riders and sees value in “no-boys-allowed” ride nights to diminish the intimidation factor many women feel when approaching the dude-dominated sport. “When girls ride together there’s no pressure at all,” she says. 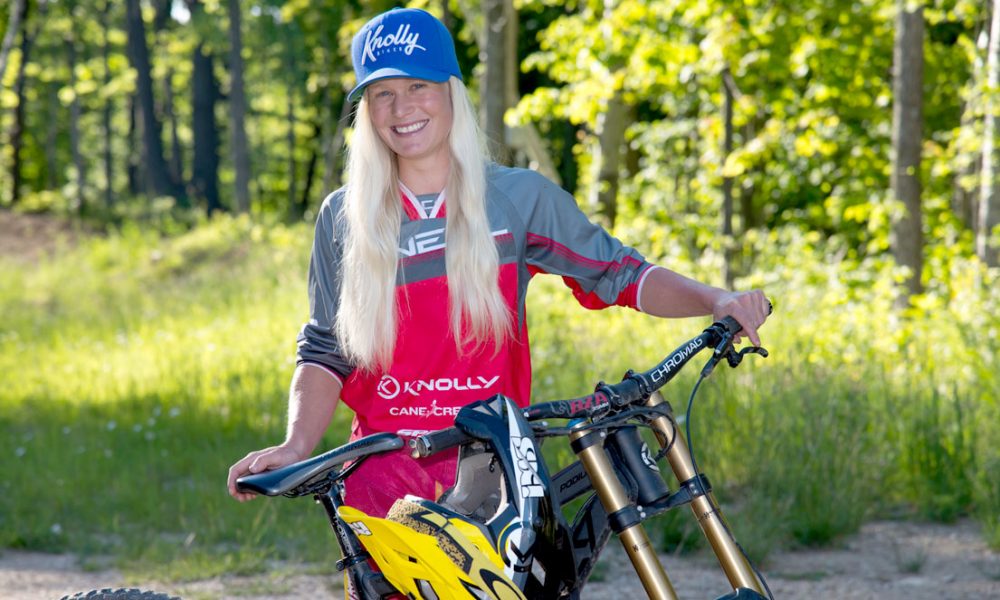 How did you get started Downhilling?
I went from riding a bike around the block as a kid to not biking for the majority of my life (laughs). Then I started dating a guy who liked Downhill mountain biking and I thought I’d try it. I put my short shorts on and my sneakers and I went to Blue. I went a few times and said this is not for me. I kicked it to the side, watched my boyfriend race and did the marshalling thing instead.

ML: What made you give it another try?
It was inspiring seeing the other girls at the races. They got to know me and urged me to give it another try. I set a goal to race by the end of the first season. I rented bikes all season and signed up for the last race. I didn’t do well but everyone was so welcoming and stoked to have another person riding. It was addictive—that atmosphere and the progression you can see in such a short time. You’re always learning little things and overcoming obstacles, going over one rock that you couldn’t ride last time. You get all excited and wonder what you can do next run. Even if I master a trail that’s super challenging right now, I know just around the corner there’s a trail that’s 20 times harder. The challenge is constant and I love it.

Are there many girls who ride in this area?
I take a group of girls out riding every Friday night at Three Stage—friends of mine who have just started to dabble in bikes. We have a no-boys-allowed ride night. It’s a lot of giggles and squeals and no intimidation; no one gets frustrated. It also brings me back too. It’s good for me to remind myself how you properly ride over a rock. Sometimes I forget and I just smash over things so it’s good for me to go back to the basics.

What about girls on the downhill trails at Blue Mountain?
Last year there was a significant jump in the number of girls at Blue. It’s nice to see so many girls showing up and hopefully they’ll come race too. I know it’s a bit intimidating but ultimately it’s just a bunch of girls who are friends and it’s pretty awesome riding your bike for the weekend and working specifically on one trail. I’ll never regret doing that first race because it really got the ball rolling. I learned so much.

Why do you think girls thrive when they ride together?
When girls ride together there’s no pressure at all and it’s a ton of fun. There are so many different ways a girl carries her weight on a bike too—from positioning to the way we handle the bike.

You’ve competed in Canada Cup races in BC, Quebec and Ontario and raced in the United States. What are your plans for this season?
There’s a Canada Cup race at Blue Mountain this summer. My boyfriend and I pretty much do all the races at Blue Mountain and the Eastern U.S. Cup races in New York, Pennsylvania and New Jersey. My goal is to take off some of the pressure I put on myself and focus on having fun. Those Friday night rides are the right mix: Laughs and tailgate beers after.

For more on downhill mountain biking in Ontario, check out https://www.bluemountain.ca/