Summer, 1999: I embark with three friends to paddle out to Giant’s Tomb Island on Georgian Bay, in one canoe. In the channel we encounter a lone monarch butterfly crossing toward the same destination. We eventually part ways and before too long we encounter another lone pilot on a similar path. We arrive on the Tomb and begin beachcombing the southeast shoreline. We hear the wind and waves crashing on the north shore, unlike the lee side we paddled in on, and curiously wander over. Completely different shore. Granite boulder coastline, and whitecaps on the Bay. We continue to circumnavigate the island. We hadn’t imposed a timeframe and could either complete the island or cut through the forest back to our starting point. At a certain point we decide to tackle the latter, and choose an opening in the forest. We delve a little deeper before we come across a spectacle we had not expected: A grove plastered with monarch butterflies nesting together. From high above us, encircling a small opening, every surface of branch supported a monarch, imitating the leaves of the forest.

Recently I sat with Audrey Armstrong, a member of the Monarch Teacher Network of Canada, at Rachel’s Diner in Lion’s Head and asked her what she knew about local monarch behaviours in recent years. Could she explain the type of behaviour we observed years ago on the Giant’s Tomb? She tells me the event we came across was a roosting, and explains the pilots crossing the channel were streaming toward their congregation.

Streams are the paths between migration poles which are spread out over eastern Canada on the northern end and Mexico in the south. “You will see those roosting formations when the temperature drops between 10 to 15°C,” says Armstrong. “If it’s 5°C they can’t even crawl.” The monarchs simply gather up until ideal flight conditions resume. Roostings can be found in the same places year after year. Audrey shared stories of roosting sites in the Grey-Bruce and Manitoulin Island areas. In 2007, she found a roosting on Grey County Rd.1 in Kemble, ON. “One of the reasons roosting behaviour is little known is due to the fact that it can be difficult to spot, especially in mid September, the way they fold themselves back in leaves as they begin to change colour in late summer,” she says. “From that [Kemble] roosting, we were able to tag some, and estimate a count of around 700.” She said a year later they found a second monarch group roosting at the same site. “Generally you’ll see them passing through Grey Bruce around mid-August to mid-September.” Another roosting found near the Saugeen River yielded an estimated population of 2000. Armstrong facilitates educational workshops through the Monarch Teacher Network, informing people what they can do to help monarch butterflies by building up their habitat.

“We can all do something to help. If you have milkweed at home, leave it there, and if you don’t have it, plant it.”

Not only does the monarch migrate from Mexico to eastern Canada, it takes multiple generations to pull this off. Last February, monarch populations spiked dramatically from the record lows of the past three years; Monarch Watch, a group based out of the University of Kansas, estimated 200 million monarchs over-wintered in Mexico. A month later, a winter storm ravaged colonies in Mexico, leaving butterflies frozen to trees and dead on the forest floor. Armstrong believes it is difficult to determine how hard the storm will hit the monarch population because they had just begun their northward migration. A single storm demolishing populations at any stop along their route is just one of multiple challenges monarchs face. Armstrong adds: “Habitat loss is likely the largest threat to monarch populations.”

So what defines monarch habitat? From Mexico to Canada, the monarch migration streams along patches of milkweed. The life cycle of the monarch butterfly depends on milkweed. Eggs are first laid upon the underside of milkweed leaves and hatch into larvae. The monarch caterpillar eats the leaves until entering the chrysalis stage where it cocoons itself, usually on the underside of the leaves. Then finally the butterfly emerges into adulthood, all within around 20-32 days. The monarch lives in symbiosis with the milkweed plant and when changes to milkweed densities occur along their migration paths, it can severely affect any one of the multiple generations completing the journey.

“Loss of milkweed habitat occurs for many reasons, mostly changes in land use,” says Armstrong. “Clearing of fields and removal of milkweed along roadsides play a role in this. Monoculture practices and herbicide also have an impact.” The monarch is not a local resident, but is with us for an integral part of its life cycle, and Grey-Bruce and Manitoulin are very important stops along their migration route. “The best message you can give people is that we can all do something to help,” Armstrong stresses. “If you have milkweed at home, leave it there, and if you don’t have it, plant it. Once found on the Province of Ontario’s noxious plants list, milkweed seeds can now be found on the shelves at nurseries—that’s a big step.”

The Monarch Watch Waystation program (monarchwatch.org) was developed to create habitat for migrating monarchs. Registering your yard allows you to establish habitat for monarchs, as well as tag them. This means they can be potentially identified and monitored. Seed kits can also be purchased from here that include varieties of native milkweed as well as native nectar plants as a food source for adult monarchs.

The monarch is a threatened species yet so far has rolled with all the punches and continues to loft along from one generation to the next. We can all help keep an eye out for roostings in the trees on cooler summer days. We can identify milkweed plants, protect them, and pay attention to what other plants adult monarchs are eating, and protect them also. I know for myself that after speaking with Audrey Armstrong, I just might have to paddle back out to Giant’s Tomb Island on a cool August night.

To learn more about what you can do to create habitat for monarchs, check monarchteacher.ca for workshops in your area. 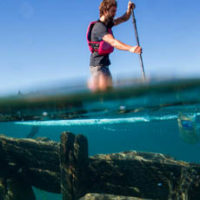 TOP TIPS FOR FREEDIVING AND SNORKELING BY SUP
As soon as a conversation about freediving begins, two things usually arise. People often ask, “How long can you hold your breath?” or “How deep can you dive?” I find the answers so far have been, “Long enough,” and “Deep enough for the goal.” People also ask if it’s dangerous. Not unlike anything else we take up in the outdoors, “It can be.” There are inherent risks involved. So when we explore the questions of how long and how deep we dive, we have to weigh our experience level, just like any other outdoor activity… Read more