Standing in line at the grocery store, you pick up a magazine. Flipping it open you pause on a photo: a tiny red kayak embedded in a frothing vertical wall of water. The image is crisp and clean—just a solo paddler and a massive waterfall. Gripping the glossy pages, you say to yourself: “Dude must be crazy—how did he survive that?”

When we view adventure sports through the media, we are spectators, privy only to the information within the frame or the video screen. We don’t see what goes on before and after the shutter closes. For whitewater kayaking that means missing a world of information that makes up the big picture. We don’t see the athletes study the rapids before the drop, scouting the location at low water to assess the depth and landing. We don’t see the team gathered on shore discussing rescue plans A, B and C and we don’t see the team pack up and head home when the level wasn’t right or the consequence too big.

“The skill needed to run certain rivers that look less impressive is substantially higher than just hucking yourself off a waterfall.” —Kalob Grady

Kayakers running support and safety are seldom seen in waterfall photos. Floating at the bottom, they look like spectators but are ready to perform rescues if needed. Obstructed by trees and rocks upstream there may be other paddlers running safety near the crux move—which is not always the drop itself. “There are countless scenarios where the journey to the drop is more significant than waterfall or rapid itself,” says professional kayaker Kalob Grady. “The buildup or training to accomplish a goal can be the most rewarding part of a new waterfall.” Ottawa Valley native Grady has competed in freestyle kayaking and extreme racing on the world stage. “The skill needed to run certain rivers that look less impressive is substantially higher than just hucking yourself off a waterfall,” he says.

Learning to make decisions on your own is part of developing as a paddler. Grady recounts a moment in his younger paddling years when he ran a drop that was above his comfort level at that time. “No one told me I had to, and no one forced me into my boat,” he says. “I ended up making my decision without any thought on skill or outcome, just the fact that I wanted to be at the bottom.” This decision led Grady to compressing his back and sidelined him for a month. “[It] gave me a tremendous amount of time to reflect on my decision.” That incident, he says, has shaped his paddling decision-making process. Every situation is different, but Grady often asks himself three questions before a big descent or drop: “What am I doing, why am I doing it, and how am I going to achieve this goal?” This allows him to step back from distracting emotions.

Just as each waterfall is different, so too is each paddler’s approach. “My decisions and how I make them are in the moment,” say Ben Marr, an Ontario-born but West Coast-based pro kayaker. “I take into account my surroundings, my environment, who I’m with—and how I feel, more than anything.” Marr recounts a recent occasion where he chose not to run Sahalie Falls, a 100-foot waterfall on the Mackenzie River in Oregon. Having run Koosah Falls earlier that day, he decided he didn’t want to take the extra risk by running a drop with debris in it.

Grady believes that paddlers are supportive when someone decides not to run a waterfall. “Kayakers will often respect others more for their decision to walk a waterfall, or say ‘no, not today’, rather than putting the entire team in a sketchy situation.” Peer pressure still exists—but like in any sport it’s about the people you choose to be around. Paddlers take care of each other. Safety is embedded in the culture of the sport. It’s seldom seen in photos or videos but paddlers carry pin kits, ropes, and rescue gear.

Those paddling at the highest level know how to run safety. Most have experienced scary situations on the river. Many have lost friends. “In kayaking, you do your very best to surround yourself with a group of amazing friends/paddlers that you can trust and depend on in every situation,” says Grady. “This trust runs deep and can’t be taught. It’s something that grows as you develop with your team and spend time on new rivers.”

The sport of whitewater kayaking is evolving. But does the media draw a true picture? “I believe the media accurately shows the top end of the sport and the direction each genre is progressing, whether freestyle, racing or waterfalls,” says Grady. “On the flipside, there is a tremendous amount that goes on behind the scenes or while the camera isn’t rolling that the majority of people never see.” Media is not trying to cater to the masses. It’s highlighting the top paddlers. Kayaking offers infinite chances for learning, exploration, and self-improvement. “It doesn’t have to do with the difficulty of the water beneath you,” adds Marr. “But that you are in a boat on the water.”

Staring at a waterfall photo in the grocery store, you’re only given a small piece of the whole picture. You can’t see all that happened before the drop. Everyone sees something different when they look at a kayaker sending it over a waterfall. Grady and Marr have the full picture—a view upstream and downstream; one of community and support but also progression. Waterfalls are part of whitewater kayaking, but don’t define the sport.

Excerpted from the summer issue of Mountain Life—Blue Mountains. 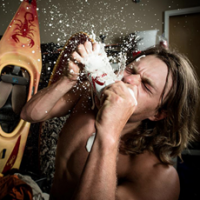 MULTIPLICITY 2016: BENNY MARR – THE WILD WAYS OF A WHITEWATER WIZARD
Benny Marr is one of, if not, the top kayakers in the world.  From insane big wave freestyle, to big water first descents (including the legendary, previously untested Site Zed and the mighty Congo) Benny is the best at what he does, but you would never know it meeting him off the river. He’s kayaked the famed 3-week expedition through Canada’s Nachvak River, and has recently tackled an incredibly technical expedition through Papua New Guinea… Read more 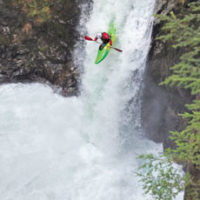 FREE FALLING: THE EXHILARATION OF GETTING AIRBORNE ON COAST MOUNTAIN WATERFALLS
Raw, untamed, unrelenting, unforgiving, uncaring – and yet peaceful and calming at the same time – waterfalls are the ultimate visual display of the earth’s power, cutting through solid rock, resisting human authority. Lifeblood of the earth, rivers carry water back to the ocean to resurrect the endless cycle of the water droplet. Winter stores that energy, locking it in the form of snow and ice… Read more