Beginning today on RedBull.com, The Learning Curve documents BMX’er Drew Bezanson’s first foray into the world of professional slopestyle mountain biking as he takes on the 2016 FMB World Tour season with the hopes of earning a spot at the sports most coveted event, Red Bull Joyride on August 21st.   The six-part series released, every Monday, captures the high-fives, tumbling lows and humbling experiences of entering a new sport at its absolute highest level.

This week in episode one, Red Bull catches up with Bezanson a few months following his release of Uncontainable.  Still riding the high from the video’s success and his own personal accomplishment, Drew begins looking towards the next challenge – slopestyle mountain biking – and coming to terms with the uphill battle he’ll face if he wants to shred slopestyle with the best of them.

Slopestyle mountain biking has taken its cues from all types of bike disciplines, from classic downhill, to dirt jumping and of course, BMX.  While many riders in the sport have roots in those various backgrounds, this year marks the first time that one of the most recognized BMX riders in the world takes on the FMB World Tour in an attempt to reach Red Bull Joyride.  For X-Games silver medalist Bezanson, slopestyle seemed like a logical next step after absolutely sending it in Uncontainable, and a fateful tweet from Crankworx shortly after it’s release only reinforced that.

“Crankworx sent me a tweet last summer when Uncontainable dropped saying I should compete at Red Bull Joyride next summer – I wasn’t sure if they were kidding or not at the time, but I decided to take it seriously!”, says Bezanson.  Since then, he has definitely taken it to heart, doing all that he can to earn his right to compete with two major events under his belt and most recently, an 8th place finish at the Swatch Prime Line.

“It has definitely been harder than I expected coming into the season”, says Drew who still hasn’t quit his day job as he continues to balance a hectic BMX competition schedule through the summer season.  “But making the finals at Swatch Prime Line was a highlight.  I came into the events with barely any time on my MTB, put in the work in practice and it paid off… I’m happy.” 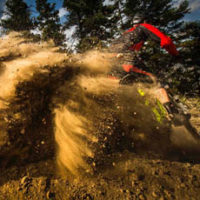 THE LILLOOET EFFECT: FOUR-SEASON POTENTIAL IN ONE OF BC’S MOST ISOLATED COMMUNITIES
Lillooet is often described as “where the wet meets the dry,” a reference to the town’s geographical position in the rain shadow of BC’s Coast Mountains. Yet, for all the rugged beauty of these rainforest hills bordering onto a desert canyon, the landscape in view is not a limitless playground for mountain bikers to bask in. This is St’át’imc Territory, stretching from Long Island on Harrison Lake in the south, up to Churn Creek Protected Area in the north… Read more