I imagined Phil Stone would be as big as the mountains he had spent his life protecting.

Instead, he stands five foot six, including his thick auburn hair, owns a tiny belly, and hikes at a brisk pace while leading me up to Lakeview Crag in the Chinese Mountains on Quadra Island. Above us, a canopy of fir trees blocks the sun and the muddy puddles still haven’t dried from last week’s rain, but Stone assures me the crags are dry.

And he would know. Over the last year alone, Stone has established 125 new sport climbing routes in the Chinese Mountains—nearly all graded below 5.10+. Not that Stone did all the work alone—in his self-published guidebook to the area he shares credit with friends, local climbers, and his wife Renee—but Stone is the common thread weaving everything together. So, after thousands of hours and more than thousands of dollars spent on these routes, many of which lack the difficulty to challenge a climber like Stone, what motivated him to do it?

“What I think about while I’m working is how people will get to enjoy that fabulous rock and the incredible views,” Stone explains, adding that he began establishing climbs in 2014, piggybacking off routes set back in 2009 by local, Tony PrihatiningJati. Quadra Island has a reputation as a family-friendly recreational destination and Stone wants the crags to reflect this, bringing more tourism dollars to the community he loves. To this end, he likes to develop crags with easy, moderate, and difficult routes so that diverse groups of climbers can all have a great day.

“It’s nice to have a bit of spice if there’s some big clean air or an overhang, but you need to pay attention to what the fall potential is. I want to ensure that what I create for other people to use is as safe as I can make it. I have a responsibility to the community and to myself to do as good a job as I can.”

“I’m mostly concerned with ensuring clean air so if someone falls on a bolt they won’t hit a rock,” he says. “And bolt spacing is important. We don’t want big runouts here. It’s nice to have a bit of spice if there’s some big clean air or an overhang, but you need to pay attention to what the fall potential is. I want to ensure that what I create for other people to use is as safe as I can make it. I have a responsibility to the community and to myself to do as good a job as I can.” 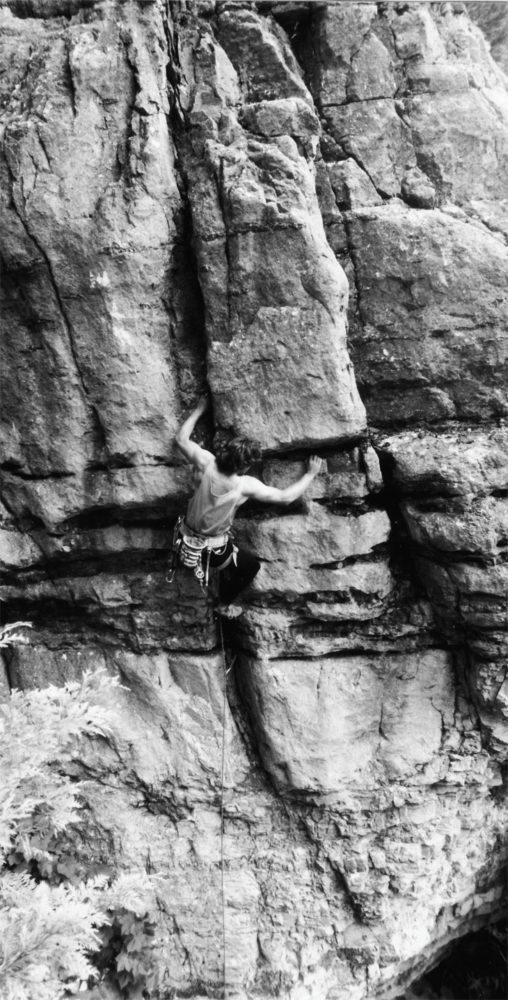 Stone’s sense of communal responsibility extends far beyond the crag and he has dedicated much of his life to creating a better place for everyone to live. In two federal elections he stood as the Green Party candidate and he currently chairs, and is a long-serving member of the Strathcona Park Public Advisory Committee. He also sat on the Campbell River Tourism Marketing Committee, the board of the Discovery Islands Chamber of Commerce, the board of the Quadra Children’s Center, and the Quadra Island Community Association. As well, he publishes numerous community newsletters and guidebooks, including the influential Island Alpine Guide. Among all of these responsibilities and obligations, he somehow finds the time to establish hundreds of new routes at a pace of two to three a week.

Back at Lakeview Crag, we hike up to find the new route spot Stone has located from below. He unpacks his bag and clips, and hangs and drapes the gear he’ll need: brushes, scrapers, masonry drill and a hammer. Stone uses a figure-eight to rappel over the edge and begins to bang on the rock, listening for a solid thud. When he finds it, he unslings the masonry drill and bores a hole into the rock as grey dust swirls into the sun. Done, he taps a bolt and hanger into place with a small hammer. This will be the first of a series of bolts that Stone will secure into the rock before he scrapes the face clean of lichens, moss, dirt and the occasional loose, boom-box sized stone.

As he works, it becomes clear that Stone doesn’t do this for notoriety. Over the hours of time we spend together, he does not speak about himself, preferring to speak about the Island, his peers, and climbing in general. But as he describes what he looks for in a route—lines with big exposure and great views, the same things he fell in love with when he began to climb in the alpine as a kid in the UK—more character details start to emerge.

“Mountains to the climber are both adversary and friend in a way that few things can be,” Stone says. “We love and fear them, we respect mountains all while they intimidate us. They influence our lives as an obsession. This can only nurture a relationship with a depth that few can understand, relate to. Those that do are other climbers. There is a built-in bond from those shared experiences, the respect and love of the peaks themselves, but also the wilderness that so often surrounds them and the creatures that inhabit their realm.”

The route clean, Stone slips on his harness and ties into the rope that I will use to belay him. Here you must trust your partner with your life—if he falls, I must arrest it. After watching me ready myself, Stone decides to trust me.

Stone climbs slowly. He studies the rock for holds and good clip positions. I can feel the tension of his body through the rope that connects us. I admired Stone, in part because of how his obsessions and his passions have served his community. He has crafted a life for himself where his love, his work, and his community overlap – something to envy, something to strive for. 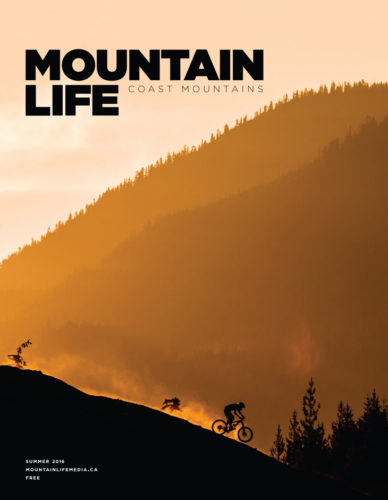 With the Summer 2016 issue of Mountain Life: Coast Mountains just hitting the streets here are a few highlights of what’s in store.  This issue is about finding solace and inspiration in a collection of stories and photographs that evoke the spirit of summer, of adventure, and of kicking back for a good read… Read more

Look for the issue at specialty retail, grocery stores, coffee shops and other fine establishments across the Lower Mainland and in the Sea-to-Sky corridor.

Or you can read it online here or download a digital edition.