The flap closes and it’s dark. Disorienting dark. Dark like when I enter a theatre after the movie has already begun. Despite the orange glow emanating from half a dozen softball-sized stones that fill a tin-lined pit at our feet, and even though I’m sitting cross-legged in a semi-circle shoulder to shoulder with ten other people, I can’t make out a thing.

But it’s warm. Cozy and welcoming. Is this what it felt like to be in my mother’s womb? 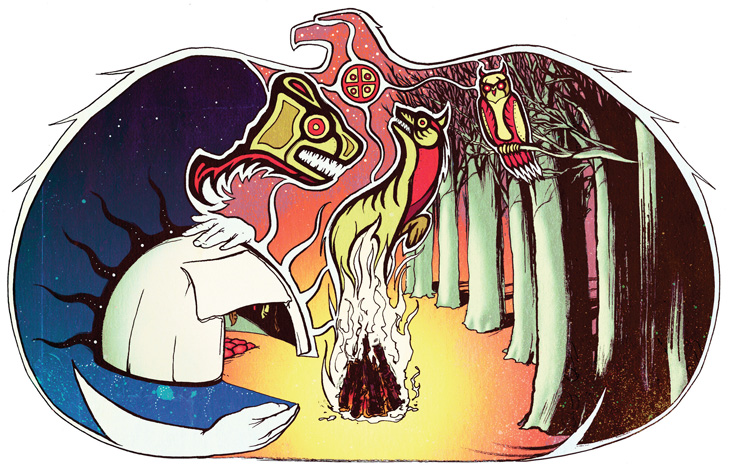 I sense rather than see a hand movement. Sizzling sparks dance across the hot rocks, interrupting the intense blackness for a tantalizing split second. I feel as much as smell a pungent, earthy aroma. It’s thick. “With this mixture of tobacco and sage, we thank and honour the spirits,” says Glen Sutherland who built the sweat lodge where I sit and will guide us through what is a first-time experience for most of us.

A sweat lodge ceremony is steeped in North American First Nations culture. It is equal parts meditation, therapy and sauna. Glen has been leading sweats for over a decade. He has completed the Sundance – spending three days and two nights alone in the forest without food or water – the requisite four times. “I had a dream that I would run a lodge,” he told me after the two-hour ceremony. An elder from Buck Island near Manitoulin was his main teacher. “She didn’t tell me how to run a lodge; she taught me how to work with energy and spirits.”

A Cree who grew up near James Bay, Glen runs a sweat ceremony about once a month in North Bay where he now lives. This is Anishinaabe country – home to the Ojibway and Algonquin. The lodge is housed inside a simple wooden building under a canopy of mature maples. About a dozen feet in diameter, the structure is domed, igloo-like. It’s meant to recreate a woman’s womb. Layers of impenetrable white canvas cover its frame woven with pliable tamarack saplings. Inside, a dream catcher adorns the ceiling of the five-foot-high structure. Colourful ribbons and a few feathers dangle from the ceiling. “They’re decorations,” Glen says. “The spirits like things to look pretty.”

Outside the building, a sacred fire has been burning for hours to heat the stones that now glow before me. Tended by the fire keeper, they represent our grandmothers and grandfathers who are on their final journey. Inside, Glen acknowledges the spirits and offers welcoming words before splashing water onto the hot stones. They sizzle. Waves of steam assault my chin, mouth and face. Humid hot air sears my nostrils. I inhale through my nose and exhale through my mouth as I’ve been instructed.

“Pray to the spirits,” says Glen Sutherland. “There is no right way or wrong way; just pray.” He adds, “They know everything anyway, but just pray.”

Glen explains that first we will recognize the east which represents babies born and as yet unborn. “Pray for the babies you know and for pregnant women,” he says. He begins to drum and we beat along with maraca-like instruments in the pitch dark. Glen sings. The beat is flat, but his voice rises and drops, rises and drops. The music takes my mind away from the suffocating heat. When the prayer ends, the temperature has eased. Glen tells us the sweat lodge is a safe place to think and talk about our challenges, and to pray. “Pray to the spirits,” he says. “There is no right way or wrong way; just pray.” He adds, “They know everything anyway, but just pray.”

“Pray for the babies you know and for pregnant women.” Glen begins to drum and we beat along with maraca-like instruments in the pitch dark.

While sweat ceremonies are as individual as the people who lead them, there are some similarities: They are divided into four sessions or endurances, each separated by a short break when the door flap is lifted and new red-hot stones replace the cooled ones. Participants enter the lodge in a clockwise direction. Women sit on one side, men on the other. The ceremony proceeds to each of the cardinal points.

Glen’s wife Jennifer, who is also Cree, sprinkles the new stones with a herb mixture and blesses them. The temperature rises as water is applied. The prayers continue. This time, Glen focuses on the south for youth. He speaks of residential schools, alcoholism and abuse, and how it will be easier for future generations. “We love our parents,” he assures us. “We forgive them for what they did.” Most of the others who sit cross-legged in our semi-circle are young Aboriginal men. Many college and university students attend these sweats. Far away from home, they find comfort in the tradition.

The drum beats on. More water. The temperature rises. Others mumble their personal prayers. Sweat streams down my temples. My clothing sticks to my skin. I’m enveloped in the lodge’s thick darkness. It holds me tight.

During the next endurance we focus on the west, which represents adults. The man sitting next to me speaks up. His wife is pregnant with their first child. Realizing life is more serious now, he asks for help to make his way. He tells us he’s been five years without a drink. He drums and sings a prayer in a deep melodic voice. His request voiced, my neighbour drifts off into his own world, speaking to someone I can’t see in a language I don’t understand. The drum beats on. More water. The temperature rises. Others mumble their personal prayers. Sweat streams down my temples. My clothing sticks to my skin. I’m enveloped in the lodge’s thick darkness. It holds me tight.

Not all sweat ceremonies are as kind and supportive as Glen’s. Norm Dokis of the Dokis First Nation warned me, “Some leaders have harsh words for their participants.” Some sweats are for men only. Women cannot attend sweats during their menses. You are not to bring unnatural items such as watches into the lodge. Women and men must dress modestly. Openness is an overriding value. Glen explains, “I invite anybody. All nations.” He says he likes the sweat because it reduces the stress in his life. “I live with a good woman and we have children.” Now, he says, they are caring for their niece’s eight-month-old. The baby’s grandmother lives with them too. “I’m not perfect,” he explains, “but I try to live a good life.”

The last endurance honours elders. Afterwards, we open the flap and pass a pipe around the semicircle. “Don’t inhale, if you don’t like to smoke,” says Glen. I take a small puff and hand it to my neighbour. Next I’m handed a large bowl of fresh berries and asked to offer thanks to the spirits. I say a few words and, as instructed, place a small offering of fruit on the stones. When I try the colourful mixture of fresh blueberries and raspberries they soothe my raw throat.

As this was my first sweat, I had limited knowledge of what to expect. I hadn’t avoided alcohol for 24 hours and I didn’t have a clear idea about what I wanted to accomplish by attending the ceremony. I was mostly worried about withstanding the heat. But there was something primal about the experience. For a time, I lost myself in the repetitive heartbeat rhythm of the drum, the chant-like praying in a dark womb-like space. My monkey voice disappeared. I was in the moment.

For more information or to attend a sweat lodge contact Glen Sutherland at 705-471-2077 in North Bay.