“You know, it’s the mountain in the Paramount Pictures logo, and many say it’s the most beautiful peak in South America,” says our Mexican friend, a hardcore road cyclist training in the northern Andes of Peru. Some people debate if it’s actually the mountain in the logo, but there’s no doubt that biking to 4155-metre Mount Artesonraju, a blinding white peak framed by black cliffs, above the turquoise waters of Lake Paron, would leave us breathless.

We’ve been biking in and around the town of Huaraz, about eight hours from Lima. Located in the northern Andes, it’s the Peruvian adventure capital. But driving through the downtown, it’s a concrete mess, almost entirely rebuilt after a 1970 earthquake. Another hour and we’re driving past Yungay where a giant cross stands on the site where a mudslide, from the same earthquake, swallowed the entire town, killing almost 25,000.

We stop for a stiff cup of insensia for breakfast—concentrated coffee—in the town of Caraz, and then begin the 1,800m climb. Well, sort of. I take a taxi to the 10km mark, while my buddies ride from the bottom—the guilt wore off after only 4km of 22. Stuck in the granny gear, every pedal stroke is slow and methodical; I keep clicking the gears hoping there is something easier. At nearly 4,000m, my lungs feel like a squeezed tube of toothpaste. I’m working at half capacity.

When I lift my head, the view is too much: a thin waterfall coats a rock face and the shiny reflection in the sunlight is almost blinding.

In the final 6km stretch, our Mexican friend passes me: “no switchbacks now, it should be easier.”  Liar. It takes another hour to finish. I could walk faster. But eventually, with one kilometre left, and the tip of the mountain in view, I give the pedals a little more power. So close.

Dropping the bike to the ground, and standing in front of the Cordillera Blanca’s largest lake, turquoise from the lime deposits, and the famous Paramount logo mountain, it was worth the five-hour excruciatingly slow ride up—if only to hang my butt over the saddle and fly down to town in half the time. 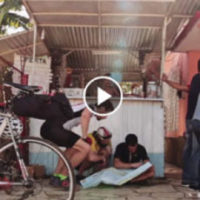 EXPLORE: CYCLING THROUGH CUBA
Ride along as a group of friends embark on a bike trip across Cuba. The U.S. National Whitewater Center presents EXPLORE: Chapter Three, a short film by Tyler Allyn and Cooper Lambla about the pursuit of the active, outdoor lifestyle. Shot on location across the island nation of Cuba… Watch video 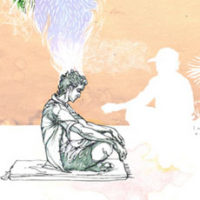 DOWN THE RIVER OR UP THE CREEK: SAMPLING PERUVIAN AYAHUASCA, AGAIN
The first time I tried ayahuasca, my mind melted into the jungle and didn’t limp back until morning. That was in 2010, in the mountainous rainforest of northern Peru, home to the Awajun nation. I was there to report on resource extraction in indigenous territory and had no business going temporarily insane, but I’d read too much about the Amazon’s infamous brew not to wonder what it might reveal… Read more