Of the Coast Mountains’ many delights, its tangle of top-shelf mountain bike trails may be the most revered. From the iconic, bum-clincher downhills and bridges to the newly-vogue snaking climbs, there isn’t another region on the planet with a better, more diverse trail system.

But what started 35 years ago as a handful of guys skidding down the mountains, tearing holes in their jeans and inventing crazy-fun new ways to take a bike from point A to B has triggered a tsunami of tens of thousands of riders, with more pouring into the forest each year. Fun is still the object, but trail building is an evolving game with a fresh breed of players.

“Now that there are thousands of people riding the same trail, you have to build it differently,” says Martin Newman, a new-gen North Shore hand-builder who often arrives at his downtown day job with dirt under his nails from a dig the night before. “The trails need to cater to a wider range of skills and be able to withstand much heavier traffic.” Co-builder Penny Deck, adds that although occasionally vilified, the mountain biking community and its new generation of trail builders are actually a huge asset to hikers, creating safe, scenic alternative routes up the mountain, and additional choices for returning back down.

Because Newman and Deck’s North Shore trail work is steps away from the urban sprawl, their efforts must support even more traffic than trail systems further up the Corridor. “It’s a bit of a self-perpetuating monster,” says Newman. “As you improve the trail, more people come to ride and hike and run, and you see them enjoying it and you feel like you should do some more work, and then you do more work and more people come.”

Ted Tempany, the heroic Squamish-based builder who favours heavy equipment and founded the illustrious Dream Wizards trail-building company ten years ago, agrees sustainability is the necessary bedrock of new-gen trail building. “The original rake-and-ride trails weren’t meant to be used by so many people,” he says. “So yes, we’re creating sustainable alternatives, but at the same time, we want to protect the classics because it’s those gnarly trails that made it popular to ride here in the first place.”

Another modern concern for new trail builders is having as little impact on the surrounding forest as possible. “I always talk about choosing a line you don’t have to force,” says Tempany. “We try to find a line that exists naturally and work to enhance that.”.

“The forest comes first,” agrees Newman who will often relocate displaced ferns when building a trail. “When you spend so much time in it, you become a part of its evolution, which is a huge responsibility.”

“As you improve the trail, more people come to ride and hike and run, and you see them enjoying it and you feel like you should do some more work, and then you do more work and more people come.”

A responsibility shouldered mainly by volunteers. Working trail every weekend and well into the dark most weeknights, Newman is often alone in a tiny bubble of light, with huge intentions and no monetary gain. Even after 35+ years, legendary North Shore trail magician Todd “Digger” Fiander is still out in the forest most days, slinging dirt and planting magic beans. What keeps these trail builders coming back year after year? They are all bike nuts, sure, and love the rush of riding fresh trail and features created by their own hand, but the real payoff turns out to be something much more selfless.

“I love it when people are stoked,” says Tempany. “Especially when I’m out of sight and I hear riders hooting and hollering in the distance, that’s the big victory for me.” A similar sense of selflessness also fuels Newman and Deck. “When I’m digging and I hear bits of conversation and laughter floating through the forest, it’s magic,” Deck says. “It’s what makes all the hard work worthwhile.” 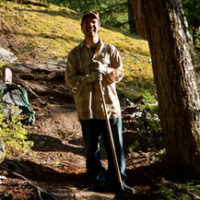 FORMER OLYMPIC COACH DAN RAYMOND FINDS BLISS IN WHISTLER’S TRAILS
Not many people can draw similarities between spinning high above the deck of an Olympic snowboard half pipe and spending countless dirty, sweating hours constructing mountain bike trails but Dan Raymond has done both and claims that although the tasks differ greatly, the process is somewhat indistinguishable… Read more 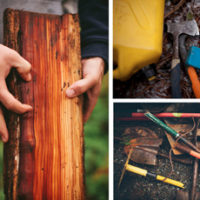 MOUNTAIN BIKING VANCOUVER’S NORTH SHORE
Whilst mountain biking may have originated in 1970s Marin Country (a ‘fact’ that is arguable but widely accepted to be the easiest-to-stomach, historical compromise), it was elsewhere that it matured and left behind its road-riding cousin. Not long after the genesis of balloon-tired mountain bikes on Mount Tam, farther up the West Coast, across the 49th parallel, there was a small cabal of mountain biking dissidents carving an evolutionary precedent for where mountain bikes should be ridden and how trails are built… Read more