Being cold sucks and being wet sucks, but being cold and wet really sucks, especially on a winter camping trip. That’s why my wife won’t go on them — her feet are frozen when she climbs into bed in the house. In a sleeping bag in a snowcave? Forget about it.

That’s why she’s the perfect person to test out this Kathmandu XT Series Polaris Mummy Bag featuring water repellent DownTek™ fill. If it doesn’t work, you can bet she’ll let us know. But first, some background. . . 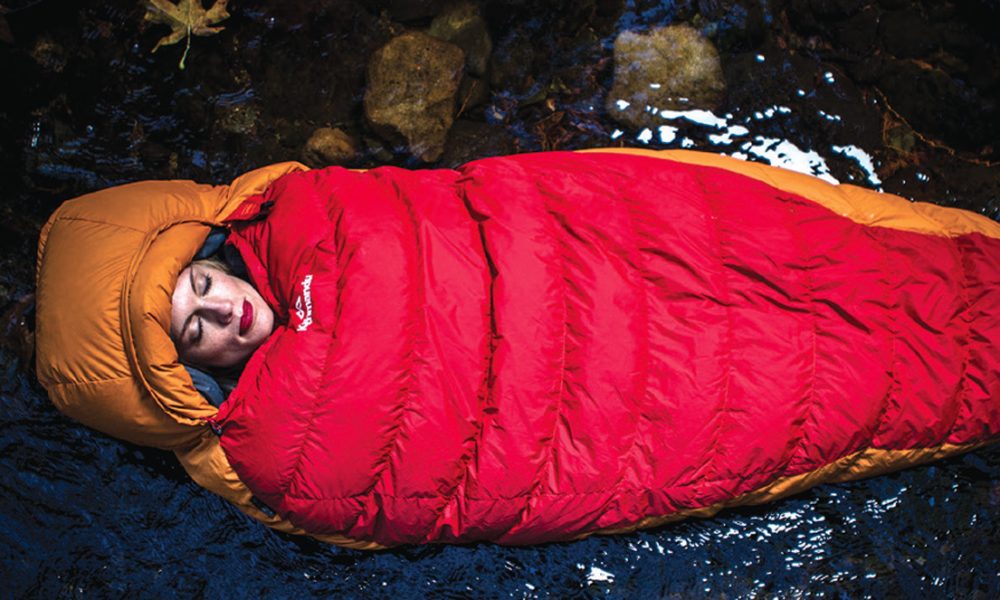 For the past decade or so, water-resistant down has been the Holy Grail of gear innovations. Down insulates so well because the lofty feathers trap a lot of air and weigh very little. And although ducks and geese spend a lot of time in the water and rain, once you remove the feather from the bird even the slightest bit of moisture turns the down into a clumpy, non-insulating mess.

Enter science — specifically nanotechnology that coats each piece of down on a molecular level. Daniel Guigui and Andrew Payne have been in the down game for years and they are the principles behind DownTek™, a water repellent down fill used by brands like Dynafit, Big Agnes, LL Bean and more. We tracked them down for some more info while my wife rigorously tested the goods.

Mountain Life– How does it work?

How did you figure it out?
Originally it was a chemical produced out of Europe that was being sold as a fill-power enhancer. The chemical itself was not a big secret, but the application was the challenge. Moving from the lab to the production floor and treating 50 kilos of down at a time was the biggest hurdle. We were too dumb to give up.

A chemical, eh? What’s the environmental side of it look like?
If you want the absolute best in water repellency, you have to use some kind of fluorocarbon. C8 long-chain carbons have been banned in most places. The original DownTek™ C-6 was made up of a short-chain carbon, which is still not ideal. DownTek™ ZeroPFC™ launched last January and it has zero chlorofluorocarbons (CFCs) and still performs ten times better than regular down. All our down is a byproduct of the food industry and our factories in Cincinnati, Taiwan and China are all Responsible Down Standard (RDS) certified.

Daniel and Andrew went on to explain that every time a new brand comes to test DownTek™ they become a customer, but the only customer I care about is my wife. After taking the garden hose treatment for half an hour, followed by 15 minutes of LAYING IN A CREEK, she was still smiling. “The outer shell is actually really repellent,” she says. “The fake rain was nothing. Obviously it sucked being in the creek, but even soaking wet the bag stayed pretty warm and maintained its loft. I’m impressed.”

Me too. Hot damn! Bring on the snowcave.