On February 6th, Ines Papert and Mayan Smith-Gobat summited Torres Central, in Torres del Paine National Park (Chile) via the extremely difficult east face. 25 years after the first ascent of this historic route, this was only the fifth known successful ascent of ‘Riders on the Storm.’ This region is famous for its unstable weather conditions, making it a very challenging place to climb.

‘Riders on the Storm’ was first climbed by Wolfgang Güllich, Kurt Albert, Bernd Arnold, Peter Dittrich and Norbert Bätz in January 1991 during 15 days of climbing over a five-week period. This stunning line on the sheer 1300m east face of Torres Central line went at 7c, A3. The climbing is very varied and demanding, ranging from delicate and runout face climbing to wide cracks and roofs, which were often entirely iced up.

Read more on the Arc’teryx blog, The Bird. 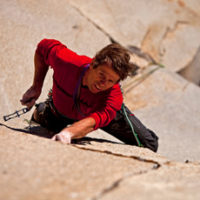 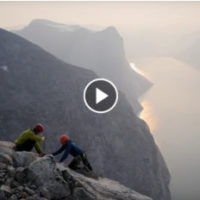 Paul McSorely, Tony Richardson, Joshua Lavigne and Crosby Johnston travel to the remote Baffin Island with the goal of a first ascent of the North Face of the Beluga Spire. The Beluga Spire is located in the Walker Arm of the Sam Ford Fiord, about 160km boat ride from the village of Clyde River NU. After two attempts of battling sea ice, turning a 6 hour boat ride into 12 hours, they landed at the toe of the Broad Peak glacier and bid farewell to their guide team… Watch video