Whenever I sail past Cove Island lighthouse – about 5km off Tobermory and the final beacon the Chi-Cheemaun ferry passes before heading into open water – my memories go back 25 years when I spent two days photographing Jack Vaughan, the last lighthouse keeper on Georgian Bay. 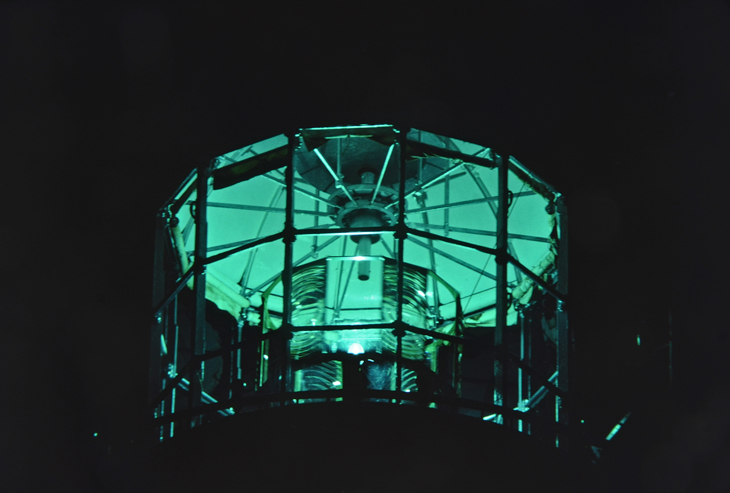 Built in 1856 on the northern Gig Point, Cove Island’s 24-metre tower guards the main shipping channel into Georgian Bay – one of the most hazardous passages on Lake Huron. One of six Imperial towers from Point Clark around the Bruce Peninsula to Christian Island, Cove Island was the first of the lighthouses to be lit on October 30, 1858.

I met Jack during the fall of 1989. It was the early days of Fathom Five National Marine Park (Cove Island is inside the park boundary) and the Friends of Fathom Five has asked me to photograph the light tower for use on a poster. We camped at the base of the tower so I could capture the first light of morning. 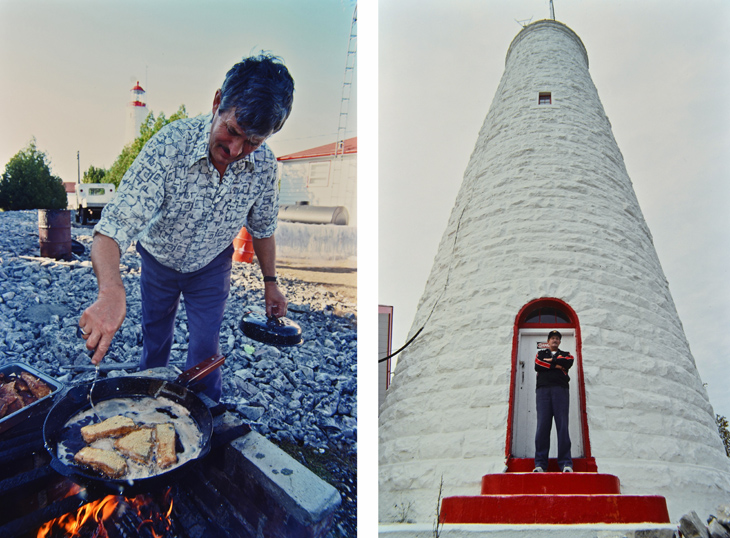 Jack Cooking at the Fire
Jack Vaughan’s warm personality was immediately apparent as he greeted us, hands on the hip at the Cove Island dock. Although we had only just met him and his wife Tillie, they insisted we join them for a family dinner. Setting up our tent, we watched as Jack took a red steel skiff out to meet a passing fish tug. By the time our tent was up he had returned with several fresh whitefish and we watched in amazement as Jack (a former commercial fisherman), filleted the fish in less time than it takes to read this sentence. Over a crackling fire behind the light keeper’s house he melted a pound of Crisco in a huge cast iron fry pan. The resulting tender whitefish (out of Georgian Bay less than a hour) is one of the most memorable meals of my life. 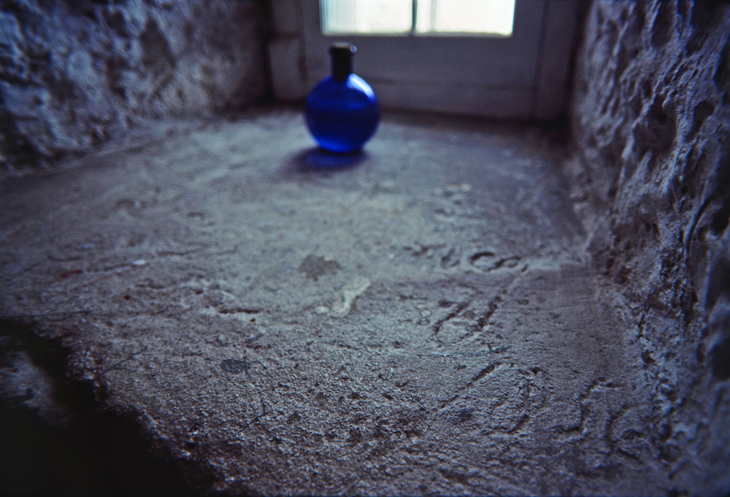 Initials Carved in Mortar
As we climbed the 101 steps, Jack stopped at the tower’s highest window to point out where a workman had scratched his initials and date in the wet mortar behind which stood a corked blue bottle filled with an unknown liquid thought to be an early fire retardant. 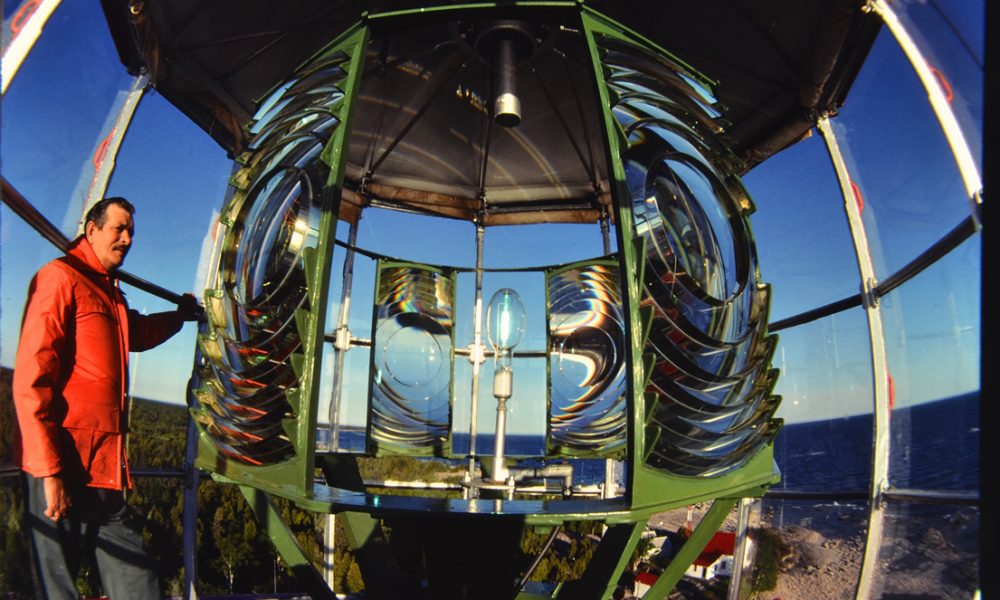 The Lamp Room
A few more steps up a narrow staircase brought us to the lamp room. Here, 156 years ago, a work crew from Paris, France had installed the cast-iron frame, paneled with twelve panes of glass capped with a copper dome and ventilator for the smoke and heat given off from the oil-fired Argand lamp, all imported from France. The original equipment from 1858 remains here today. Originally, the lamp burnt various oils. An underwater electrical cable laid in 1971 now powers the 500-watt mercury-vapor bulb and rotates the prisms. 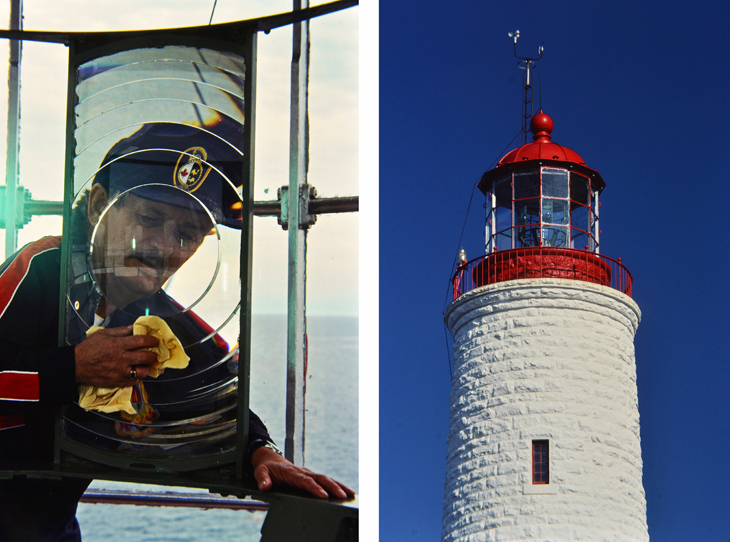 Polishing Prisms
Six prisms – each 5cm thick – magnify the light so it can be seen anywhere from 5km to 80km away, depending on the weather. Just as all keepers had done for 130 years before him, Jack polished the prisms. 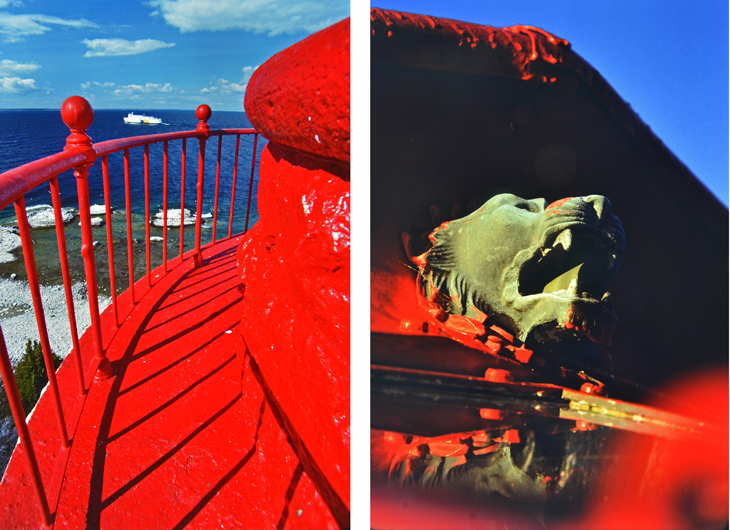 Cast-iron Catwalk & Gargoyle
Surrounding the dome protrudes a one-metre catwalk with a red cast-iron hand railing. Peering down from edge of the dome roof, 12 gargoyles in the form of lions allow condensation to escape from their waterspout mouths. 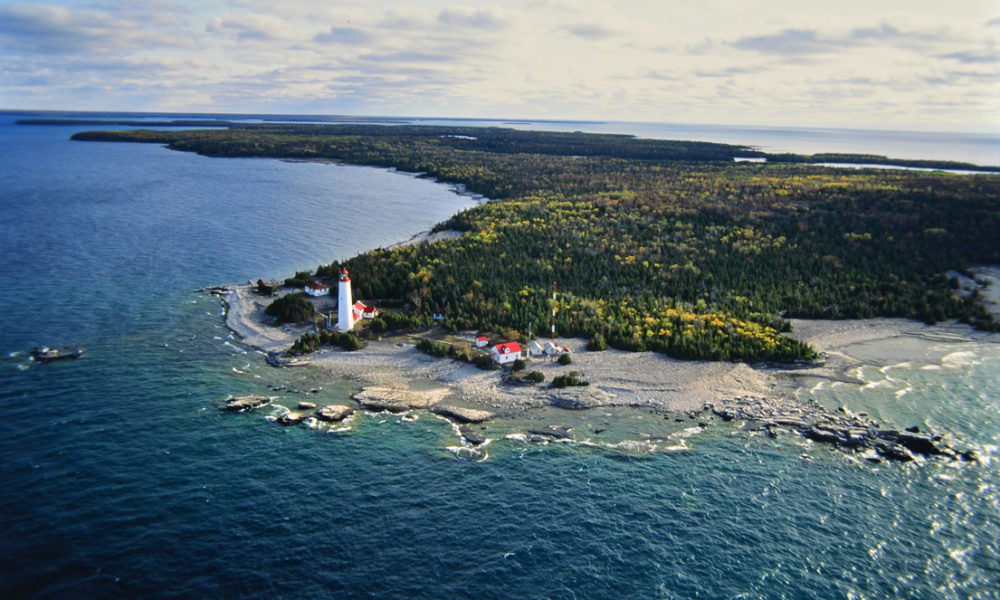 Aerial View of Lighthouse and Buildings
Starting in the ‘80s light towers on the Great Lakes gradually slipped out of human hands into automation. Keepers once manned 21 light towers from Goderich on Lake Huron to Snug Harbour, near Parry Sound. When Vaughan left the Cove Island light station in November of 1991, keepers at Lake Superior’s Michipicoten and Battle Islands ended their watch also, bringing to an end the profession of light keeping on the Canadian side of the Great Lakes. Manned continuously from 1858 to 1991, Cove Island was the longest keeper-occupied light station in Ontario.

Jack Vaughan died, aged 80, in November 2008 at Lion’s Head after accidently slipping off the dock into Georgian Bay. 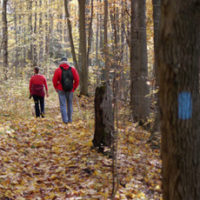 HELP CREATE A NEW NATURE CONSERVANCY
Over the last 40 years, the Bruce Trail Conservancy has secured nearly 2000 acres of land in southern Ontario’s Beaver Valley. Today, the BTC has the opportunity to add 67 more acres of irreplaceable Valley land to their conservation corridor. The proposed Lower Valley Road Nature Reserve is adjacent to Provincial land around Hoggs Falls, in a water-rich area where the Boyne and Beaver Rivers converge… Read more

BEAUTIFUL AERIAL FOOTAGE OF THE FLOODING IN BEAVER VALLEY
Photographer Richard Roth recently took his drone on a drive above the Beaver Valley and Eugenia Falls in Ontario to capture the flooding washing through the area. The footage is dramatic and beautiful… Watch video