And that’s the way it should be. Human beings are historically terrible at wielding power. And that is perhaps the most important role of nature — every ice storm, avalanche or wave crashing onto a rocky coastline is meant to remind us — “you are not the boss, so act accordingly.”

This means behaving with grace and humility, but also with confidence and precision. It means searching for connections that others don’t see and looking for places and moments that others pass by. It means trying and failing, and learning. Then heading back out into the elements and trying again.

The Greeks invented democracy (and they have some pretty decent mountains up around Delphi). Plato, one of the finest Greek philosophers, wrote a thing called The Allegory of the Cave, about reality, knowledge and nature.

This is way back around the year 520. Plato said to imagine people, who had been chained to a wall at the bottom of a cave since shortly after birth (the Greeks didn’t mess around), and the only concept these people have of the rest of world is the shadows they see on the cave wall.

Shadows of other people, above them and walking past a fire, sometimes carrying a jar or an animal, sometimes not. Their whole reality is simply shadows on a wall.

Plato then discusses what it would be like to be unchained and taken away from the shadows to see the real objects, the people, the fire and suddenly everything you know becomes infinitely more complex than you thought. And then you step outside the cave…

Knowledge and learning are infinite. Plato’s cave story is a meditation on how ideas are stronger than perceptions and how there’s always a next level. So regardless of what you think you know, the mountains can always teach you something new — about yourself, the world and the value of venturing as far from the cave as possible. 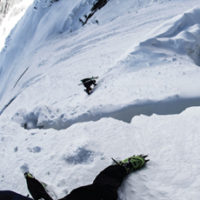