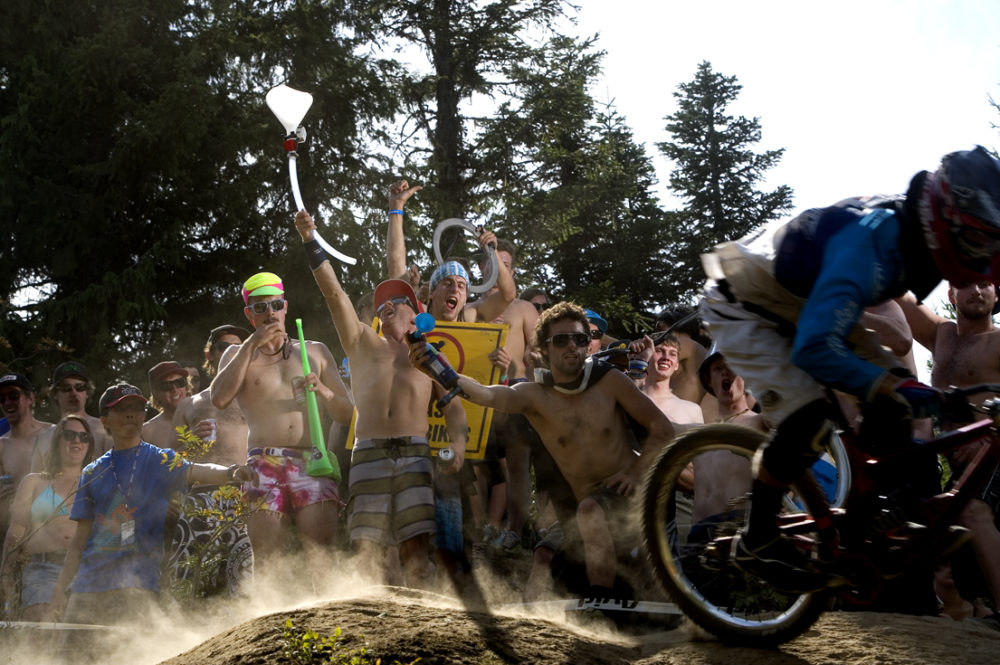 “No one is allowed to wear a shirt on Heckler’s Rock, even the girls.”

The hero of this shot is the beer bong with a GoPro strapped to it but this picture is amazing on so many levels. What is going on here?
This is at Crankworx in 2012. There is a spot called Heckler’s Rock about halfway down the Canadian National Downhill race course on Whistler Mountain. It’s mostly Aussies and Brits but they all come up and stand there and pound beers and heckle the riders and the people on the chairlift too. It seems to be growing, with a lot of the same people coming up and representing year after year. No one is allowed to wear a shirt on Heckler’s Rock, even the girls.

I love the volunteer worker in the far left who is quite obviously under-manpowered but seems to be holding things together. Is all mountain biking this goofy or is this just one of those “only in Whistler” scenes?
I don’t know. I think it does sum up Whistler’s freespiritedness and people here are accepting, they get it. If this scene was at the bottom of the hill [in the village] it wouldn’t go off like this. Cops don’t like to walk up hill that much.

And the dude with a fanny pack and tie-dyed cut-offs holding a giant horn which is apparently his back-up noisemaker as he seems to be tooting on some kind of whistle or kazoo. Is it fun to shoot this kind of chaos?
A lot of what I shoot at Crankworx is the culture and the behind-the-scenes. People always make the photos. The more charismatic and outgoing and expressive the people are, the more the shots kind of materialize.

“A lot of what I shoot at Crankworx is the culture and the behind-the-scenes. People always make the photos. The more charismatic and outgoing and expressive the people are, the more the shots kind of materialize.”

The “Hero” beer bong, random bike components thrust into the air, a blatantly stolen trail safety sign, a dude in a cape with an airhorn… the actual mountain biking is almost invisible in this shot.
The shot is composed so that the rider and the race are secondary and the scene is the star. I have an assistant to the side with a studio light aimed to light just the scene.

Photography is an artform where an accident can produce a masterpiece. Do you feel that lack of total control when you are shooting crowds of people like this?
I think with any type of photography where you are not in total control of things it’s best to just have your ducks in a row and when a great moment does happen, you are ready. All you can do is be ready and the better you are at anticipating stuff the more amazing shots you will get.