Locking eyes with a shopkeeper in Imlil, it’s game over: he’s on me. “For you free, come visit my store,” he says, beckoning me. Avoiding eye contact, I reach the edge of the town: a dusty steep trail leads to a mysterious door.

Tracing the map to North Africa’s highest peak under the candlelight, my guide Abdel points to the flame; it reminds him of growing up, without electricity. “We were one of the first families to have a black-and-white TV – everyone from the village would come to watch – when someone died the old women cried because they thought it was real.” That was 12 years ago in the village of Imlil – the starting point of our four-day-deep 4,167-metre hike to Morocco’s Mount Toubkal—deep in Morocco’s Berber mountain country, donkey traffic jams are more common than cell phones and electricity. 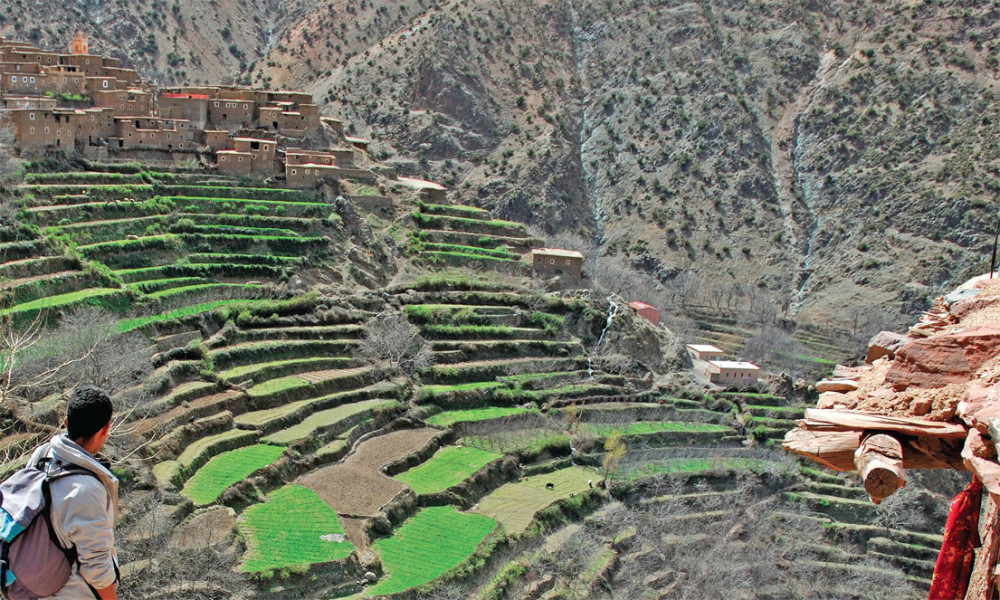 Day one: Imlil, Kasbah du Toubkal, 1,850 metres
Locking eyes with a shopkeeper in Imlil, it’s game over: he’s on me. “For you free, come visit my store,” he says, beckoning me. Avoiding eye contact, I reach the edge of the town: a dusty steep trail leads to a mysterious door (Narnia?). On the other side, roses and bright gladiolas line the stone walk. Looking up, Morocco’s High Atlas Mountains wrap around the hotel. A French military chief abandoned the place when the French pulled out in 1956; a British trekker, with the help of locals, began to transform it. Imlil was the backdrop for Martin Scorsese’s 1995 Dalai Lama movie, Kundun, because it looks like Nepal.

Leaving the Kasbah du Toubkal, it’s not long before we’re hiking alongside a bone-dry river valley. In 1995 a flash flood carrying a six-metre wall of water decimated a nearby town, Ourika; “entire trucks were washed away,” says Abdel. Imlil escaped its path. Today, cement dams segment the river. Rain seems inconceivable in this heat.

Reaching the plateau (Tizi n’ Mzki, 2,489 metres), Brahem, the 21-year-old newlywed muleteer, unloads the panniers and begins frying lamb meatballs in cumin. Abdel lays out a red pattered rug and plates of black Moroccan olives, camel cheese, and bread. Munching on my spread, I feel a drop. Like clockwork everyday, rain gushes for 10 minutes. It’s all or nothing here: desert or flood.

Trekking after lunch, the valley opens up: mud huts for animals stacked on the side of the mountain and on the other, terraces of vegetables. Running down the mountain, women carry bales of hay on their backs. “Look, she carries more than the mule,” says Abdel. Soon, the trail cuts narrowly through clay adobe houses. A girl is talking into a cell phone. It’s on speaker as the little ones huddle around her legs to listen. Electricity arrived last year in Ait Aissa, a town of 600.

The sun has returned when we arrive at our kasbah for the night. Inside, I wash my hands with rose water and eat a date dipped in milk. Berber tradition. After a tagine of chicken, dates and chickpeas, I fall into a deep sleep and have 1,000 dreams. 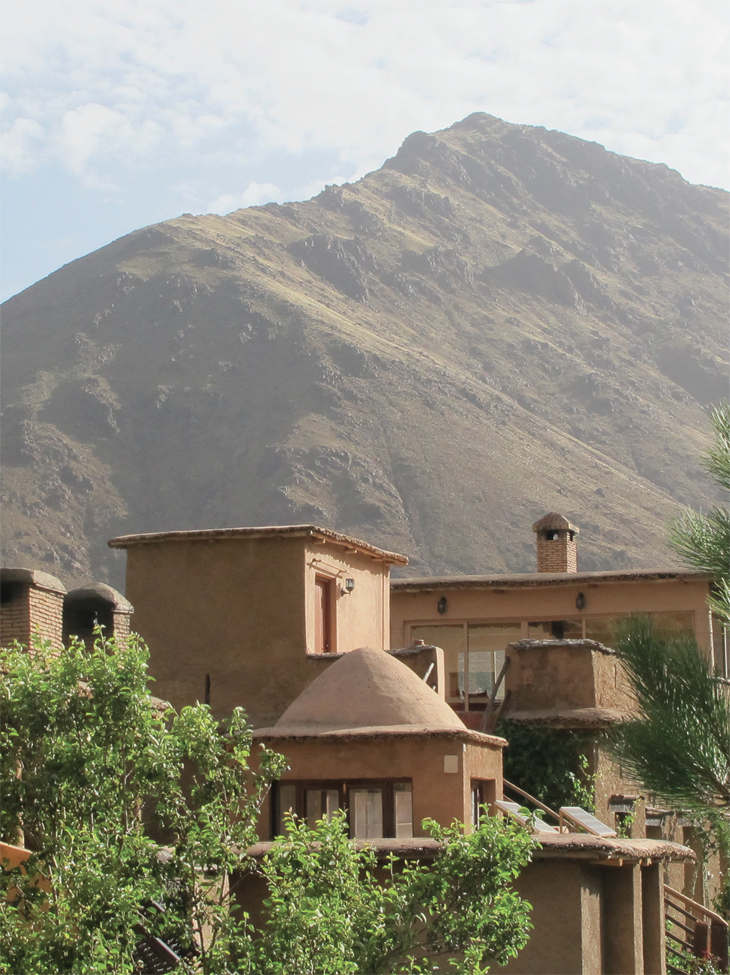 Day two: Refuge de Tazerhart, 3,000 metres
Passing the mud huts from yesterday, we get stuck in a goat jam. Shepherds yell. Goats bleat and scatter. We’re heading into the ice-patched mountains and we won’t see another village or cell phone bar for days. Lunch on my Aladdin blanket is contemplative; sipping sugary mint tea, I survey the valley and a distant Marrakech to the north. “We drink this like five times a day. We call it Berber whiskey!” says Abdel.

Two hours left for the day. Lifting my head, food, waterfall and sleep are steps away, but it feels like the longest part of the day. Suddenly a woman runs behind us; it’s the first sign of tourists. The couple follow us to the bare-bones shack where a man is sleeping on a mattress outside the front door. He lifts his head and waves, then goes back to sleep.

After dumping our stuff, we head to the waterfall and dunk our stinky hot feet. As the rain begins to trickle, then gush, we rush back to the refuge where Brahem’s pot of bubbling cumin and peppers steams up the windows.

Around the picnic table, we chat with the couple. I guess she’s from Spain. “Oh no: Cataluña! Very different things,” she laughs. Adbel chimes in. “This is the same between Berbers and Arabs.” Berbers are traditionally nomadic farmers while the Arabs live in cities. For centuries Berbers had to speak and learn Arabic; today, their language and culture are seeing a revival. 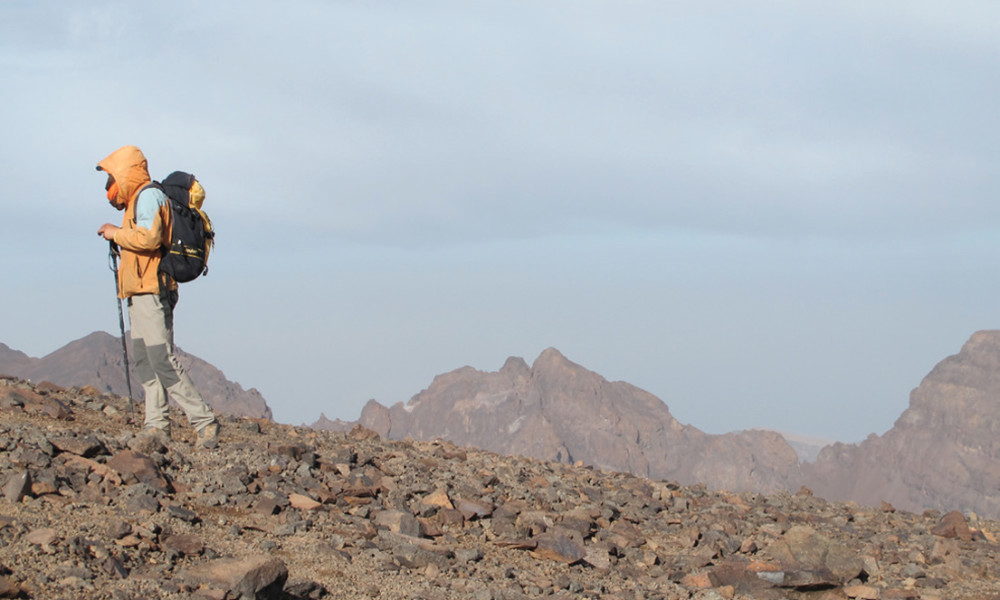 Day three: Peak Aquelzim, 3,650 metres. Sleep at Refugio de Toubkal, 3,207 metres
Leaving the refuge at 6 a.m., we walk alongside the mountain ridge, and then come across a gaggle of mules and hikers. This is disheartening. For the first few days magpies and goats are the only trail friends; I felt like a true traveller and not a tourist who bought a package.

Somehow, the hikers mention beer. “Oh, I wish,” says a Polish woman. “Can you imagine a frosted glass?” I put fun out of my mind: the next section is 95 switchbacks. From the top, it looks like a giant soft-serve ice cream cone. Two hours later, the last push to the refuge is bottlenecked with mules. Perched over the dry riverbed, the stone refuge tower looks like Nepal: it’s the last stop before the final ascent. 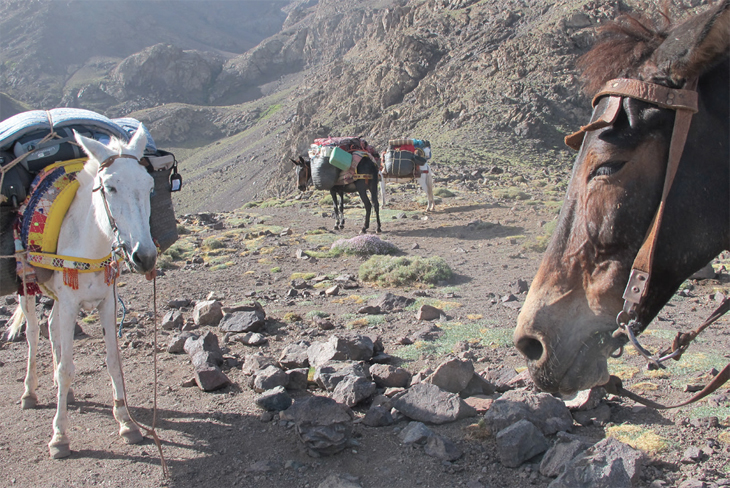 Day Four: Mount Toubkal, 4,167 metres
I hear people leaving the dorm around 5 a.m. to get ahead of the rush. Abdel and Brahem woke at 3 a.m. for supper. Today is the first day of Ramadan.

Starting behind the refuge, Toubkal is two hours away. After the first hour, sweat sprouts on my cheeks – I sheepishly sip water. I can only imagine what Abdel is going through: Muslims also can’t drink water during Ramadan.

Another hour of step-climbing over slippery shale stones, we find a group of school kids hanging from the summit’s triangular steel tower. Abdel and I remain on the lower slope to take pictures of each other and the surrounding mountains popping through the clouds.

Walking down to Imlil takes us the better part of the day. We stop for mint tea in a hut by the river and listen to rain ping off the tin roof. Gradually Imlil appears—concrete homes and then, the Kasbah. That night over supper, I notice a candle in the dining room. It reminds me of Abdel. “I miss having supper with candles. It was the only light in the house so we had to eat together, around the table. Now, we don’t do this. This makes me sad,” he told me. After supper, I’m reluctant to go online and check my email. Will the calm inside me disappear right away? How will towns like Ait Aissa change now that they have electricity? Do they already feel the calm disappearing, or do they even notice?