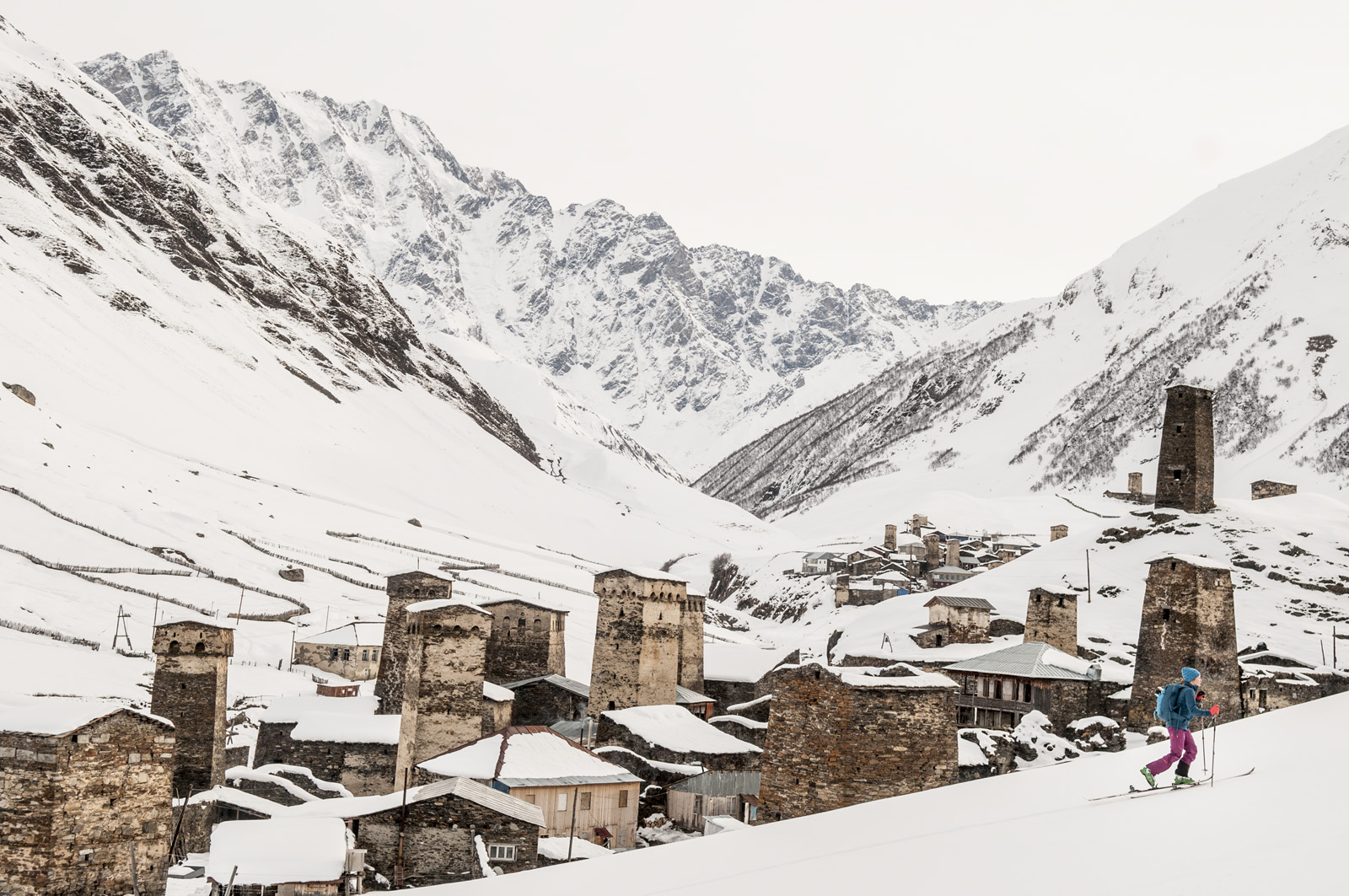 The Monk, the Jeep and the Mountain: A Georgian Ski Odyssey

Altitude explains the headache as I slide off a lift on the 3,000-metre summit of the Georgian ski resort of Gudauri. Seeking aspirin, I wander into a tiny ski patrol hut where a dozen mountain-weathered faces stare back through a fog of cigarette smoke.

Articulating my ailment with sign language, an old patroller steps forward. In one hand, dripping with green juice, is a pickle; in the other, a shot glass of clear, viscous fluid.

“Take zees. It will cure you,” he says, in a thick, villainous accent.

Disgusted but intrigued, I do what any seasoned traveler would: down both in a fury of dill and ethanol. Five minutes later I’m clicking into my skis. Gudauri lies a couple hours north of Georgia’s capital Tbilisi. Spread over switchbacks along the Georgian Military Highway, it isn’t so much a town as a series of hotels to service thousands of eastern Europeans keen to access seven lifts and a mid-station vodka bar. By all accounts it’s big, with miles of perfectly groomed corduroy. But we’re not here to ride lifts.

In Georgian legend, mythical hero Arimani is chained to its cone, punishment for stealing fire from God. There are worse places to be stuck. I’m last to drop in, the backdrop a dozen gentle ridges spread like folds in a bunched white sheet. A lifetime of touring in just one vista. Vertical melts away in big, arcing turns and the temporary blindness of deep, light snow. A thousand vertical metres and I drift to a stop on the highway. Looking back, our turns suggest the cursive font in Georgia’s ancient written language. The trance is broken by an old man in a Lada who offers us a drive.

SPIRITS
Bright ski clothes couldn’t contrast more with the long black robes of orthodox monks with whom we share a fire in Lomisi Monastery. It’s a three-hour climb to this cloister perched on a ridge separating Kazbegi Region from South Ossetia, the Russian-sponsored rogue state that vies for independence from Georgia. Lomisi’s 10th century walls predate these politics; named for Saint George’s bull, who died part way up, it’s an important temple frequented by miracle-seekers.

“It seems you spend a lot of time close to God,” Father Nicholei smiles thoughtfully, sips red wine through a bushy brown beard. I can’t argue. In many ways we seek similar spiritual connection on high; only the tools differ.

“Cheers to that.” We raise glasses in Georgian tradition, each noting something we’re grateful for. A few hours later, their robes flapping on a windy ridge, we say goodbye to the monks. Then ski forever to the valley.

WHEELS
The bald tires of the Toyota Land Cruiser in the town of Mestia say one thing: we’ve made a mistake. A fresh blanket of snow covers the 45-km track to Ushguli, a high-valley village deep in Svaneti Region 450 km west of Gudauri. The second time we get stuck, worry turns to anger. The young driver, dubiously named SoSo, ties rope around a tire in a vain attempt at traction.

“SoSo, let’s go back and get chains!” We’re definitely his first clients for Ushguli. How did he even get this truck? The question is answered when “Mama” flashes on the screen of his buzzing cellphone.

Faith sinking fast in this land of miracles and prayers, we reluctantly give SoSo a final chance. Hearts clog our throats as he navigates crumbling rock walls and harrowing switchbacks. Yet somehow So-So’s confidence grows with every kilometre. He has left Mestia a boy, and, four hours later, arrives in Ushguli a man.

HISTORY
Debarking in Ushguli is like stepping back in time—or onto the set of a Georgian Game of Thrones. Beknighted as a UNESCO World Heritage Site, the village is famous for its massive stone towers. In ancient times, villagers climbed atop the towers to rain rocks on invading outsiders— precisely what we feel like as we wander its stony labyrinths.

After finding our guesthouse, it isn’t long before we’re skinning up rolling slopes above town. Two hours puts us atop a 3,000m sub-peak of Georgia’s highest mountain, 5,201m Mt. Shara, whose vertical face looms over town.

From up here, Ushguli’s towers look small. We’re quiet as we drop in, minds already eating the wonderful food our hosts have waiting. Twenty minutes of powdery bliss and we ski right up to our door. That might have been the end, but it was more of a beginning

This feature is from the 2015 Mountain Life Annual, available by print subscription and through digital download here.