Curious about grizzly bears? A 7 minute film about the elusive North Cascades grizzly bear narrated by ecologist and film maker Chris Morgan, and including appearances by many Washington State residents who share their opinions of bears, and help bust some myths. The film includes beautiful footage of the North Cascades, and bears in Alaska where Morgan has hosted several films for PBS Nature, the BBC, and others. 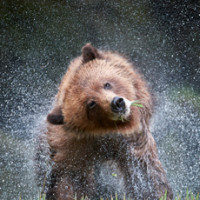 The “bear” necessities of life have not come easy for North America’s grizzly bears. The last known California grizzly, an iconic animal that used to roam free, from BC all the way down to Mexico, was shot in the early 1920s, after which the subspecies was officially declared extinct… Read more 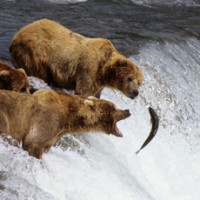 MAN WEARING BEAR COSTUME HARASSES REAL GRIZZLIES IN ALASKA
According to the Associated Press, authorities are looking for a man believed to have donned a bear costume to harass a sow and two cubs feeding in an Alaskan River. The incident happened Monday on the Chilkoot River near Haines and authorities can’t say why the man pulled the stunt in front of a crowd of onlookers observing the bears from a distance… Read more