Invariably, rough-water kayakers and board surfers on Lake Superior turn to the U.S. National Oceanic and Atmospheric Administration when the first high, wispy clouds foretell of strong winds. NOAA’s predictions are more detailed than their Environment Canada counterparts, not to mention colour-coded and projected in greater resolution. When Lake Superior glows red and purple on the online forecast, indicating waves in the 15- to 25-foot range, you can be sure that epic surfing is in the offing at the dozens of sand beaches and river mouths all along the north shore. 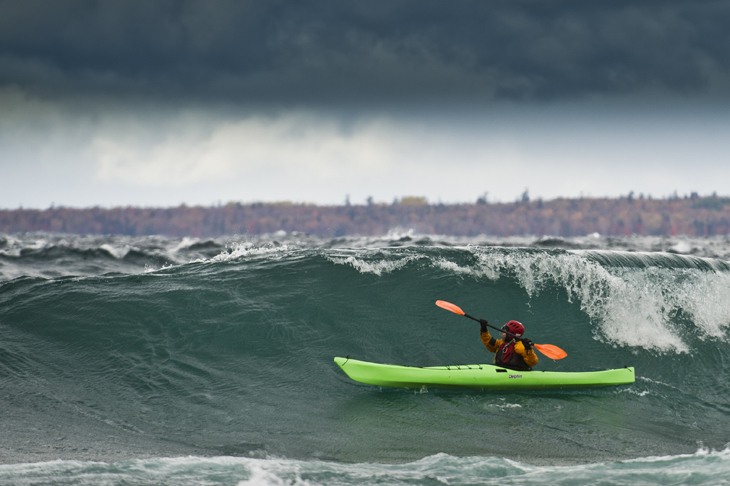 Lake Superior generally slumbers in early summer. But when the winds pick up in August, I turn to a secret meteorological weapon: my friend Joel Cooper has been observing and recording weather and studying the forecasts on Lake Superior’s east shore near the town of Wawa for over 30 years. A few autumns ago, Cooper predicted a “weather bomb.” He spoke of an intense low-pressure system the equivalent of a Category 3 hurricane – significantly larger than the 1975 November gale that sank the Edmund Fitzgerald. I heeded the siren’s call, loaded up my sea kayak, whitewater kayak and drysuit, and drove up to Michipicoten, Cooper’s home and my favourite haunt.

“There’s nothing like the feeling of a steep swell lifting the stern of my boat – a sure sign it’s time to paddle like hell to prevent the kayak from penciling into the trough and being tossed ass-over-teakettle.” 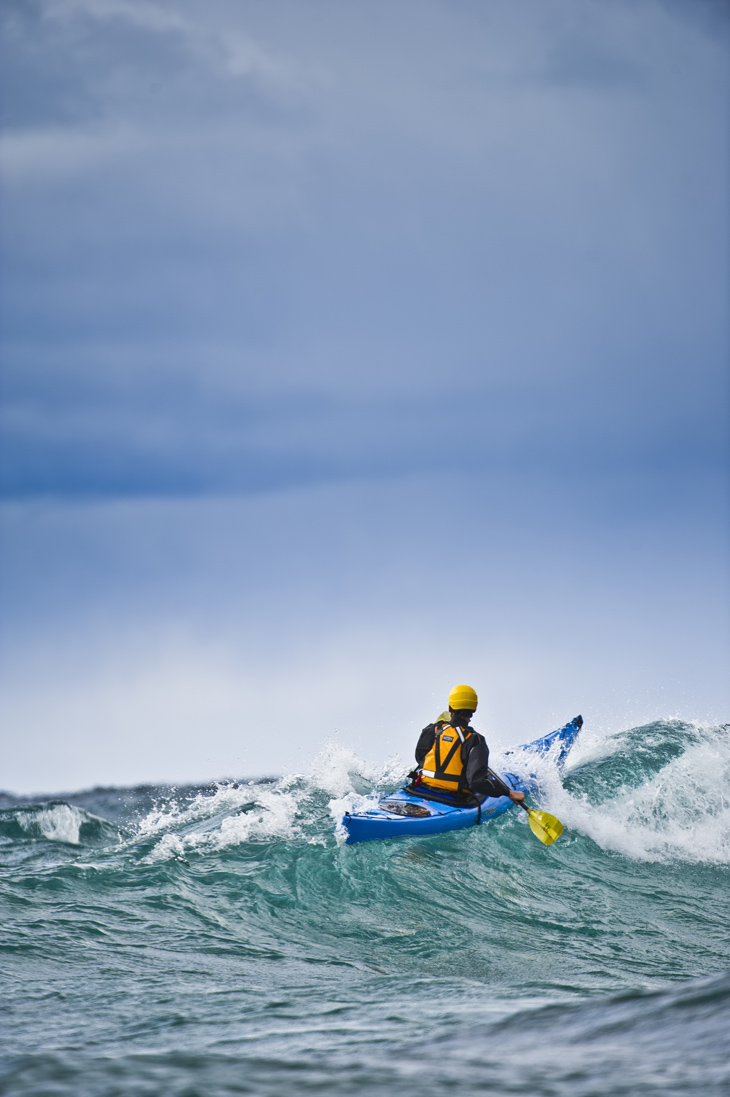 There are two great surf spots: At the mouth of the Michipicoten River, where current meets swell and throws up towering waves and a dangerous rip current, making it the preferred option for advanced paddlers or intermediates when the waves are less than one metre; and the mellower break Sandy Beach, which is safer when the waves are berserk. The local outfitter Naturally Superior Adventures (naturallysuperior.com) offers instruction, kayak and stand-up paddleboard rentals, and lakeside accommodations. 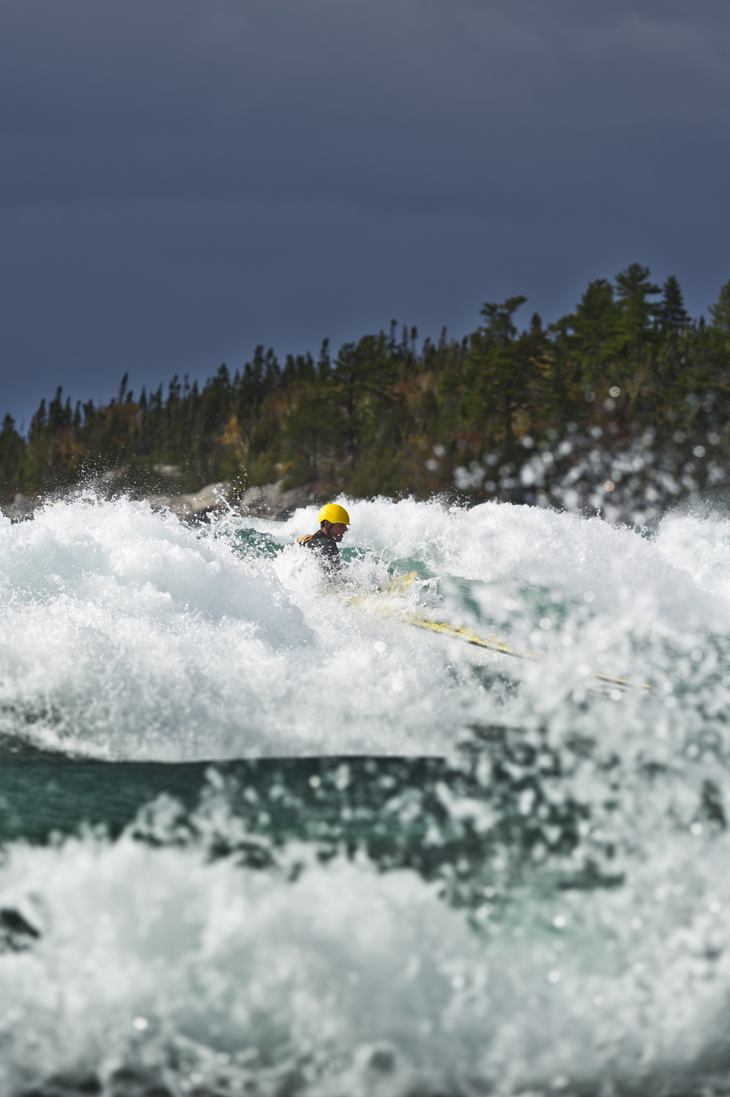 “Joel Cooper spoke of an intense low-pressure system the equivalent of a Category 3 hurricane – significantly larger than the 1975 November gale that sank the Edmund Fitzgerald.”

I’ve come to prefer the faster, wilder, less predictable experience of surfing my 16-foot sea kayak. There’s nothing like the feeling of a steep swell lifting the stern of my boat – a sure sign it’s time to paddle like hell to prevent the kayak from penciling into the trough and being tossed ass-over-teakettle. First-timers usually prefer the greater control of a whitewater kayak; also, their planing hulls make flat spins and other moves possible. Regardless of the boat, immersion gear (wetsuits for summer sessions, drysuits for the fall), a helmet, and a companion or two are essential for safety. 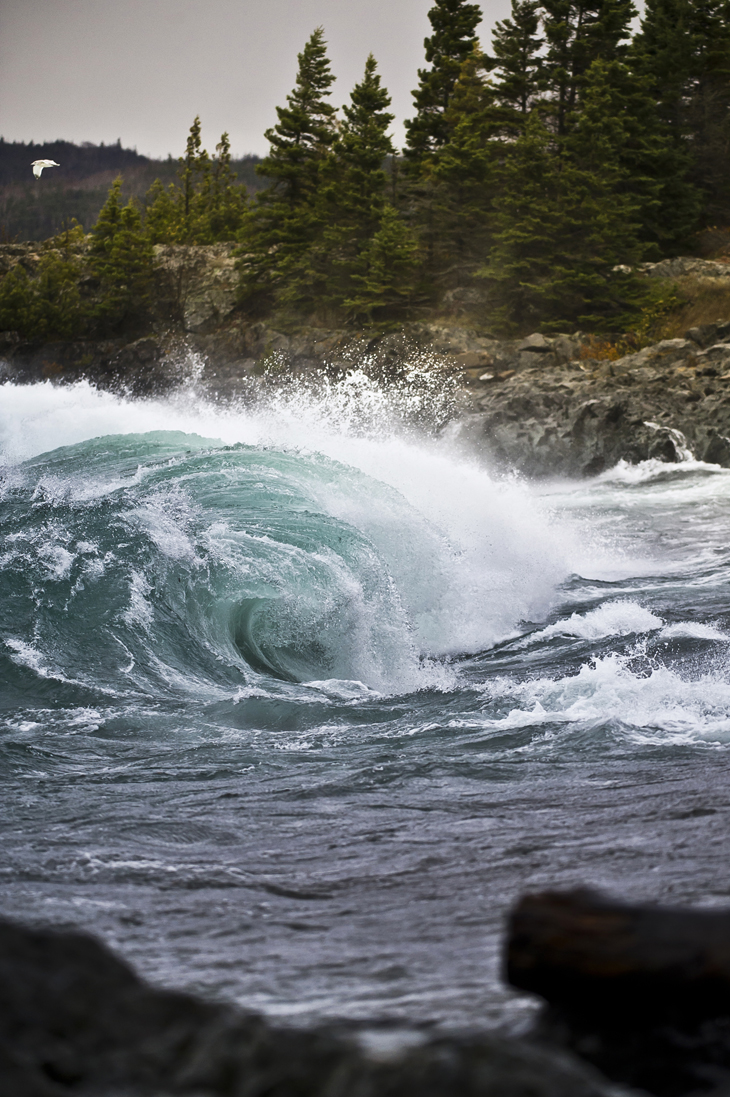 On this day, a buddy and I had our timing just right. By late afternoon the howling gale had diminished to a mere breeze and the swell kept rolling – with plenty of space in between the waves for maneuvering and rolling up from a capsize. Exhausted by day’s end, our energy was buoyed for several calls of “one last ride” as the spectacular late-day sunshine illuminated the waves in a cold, sparkling, freshwater blue. 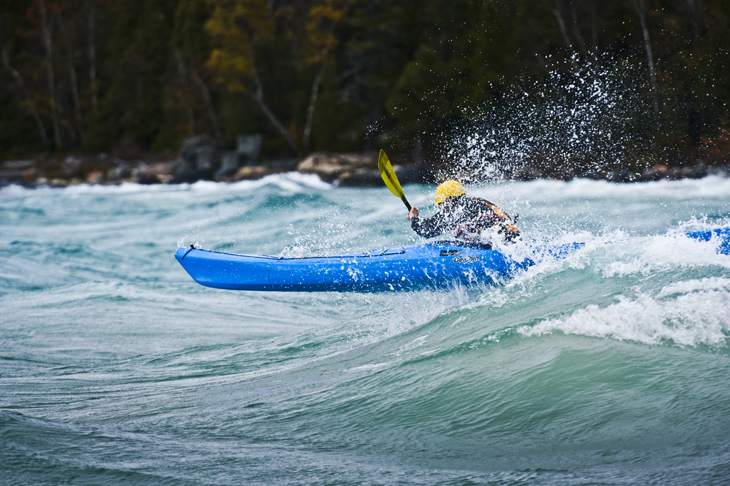 According to the 2005 documentary Unsalted, intrepid (or perhaps desperate) board surfers have been riding Great Lakes waves since the 1960s. The film depicted a staunch, sometimes quirky crew of surfers making the most of freshwater surf. But with scenes of clean, ocean-like breaks discovered on Lake Superior’s shore, the film showed that a real surfing experience could be had in the heart of the continent.

Among the first Canadians to pick up the board-surfing craze were Thunder Bay-based brothers Jaakko and Miika Natri, whose expeditions have focused on the Terrace Bay area, at north end of Superior. Besides thick five- and six-mil wetsuits to temper the cold water, the Natri brothers also pack a portable beach sauna for their surf sessions. 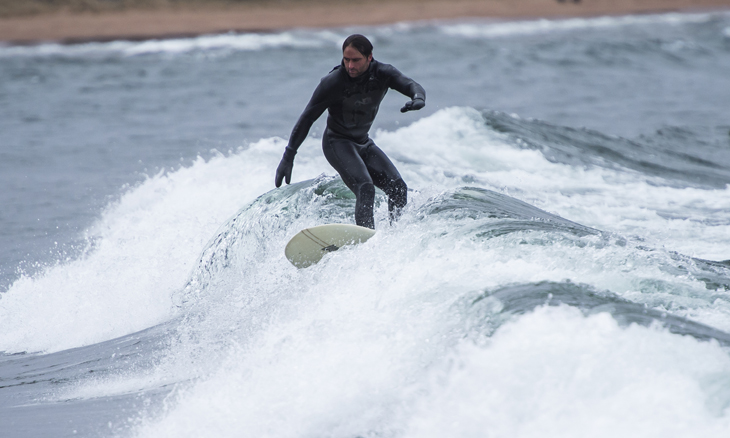 In Sault Ste. Marie, kayak surfers convinced snowboarder Vesa Luomeranta to take to the water. “My brother said, ‘These waves are big enough to board surf,’” recalls Luomeranta, “so I decided to give it a shot.

“The biggest different on Superior is that the waves are closer together than on the ocean,” adds Luomeranta, whose Superior East Board Shop (superioreastboardshop.com) rents surfboards, standup paddleboards and wetsuits. “You have to paddle out and set up quickly to catch a wave. And then there’s the wind, which we always seem to be battling. The hardest part is timing. You go out hoping that the wind stops because the clean-up is real nice.”

Luomeranta has discovered a point break at the mouth of Goulais Bay, just north of Sault Ste. Marie. “The contour allows the wave to wrap around, out of the wind,” he says. “We’re surfing smarter, finding spots in more sheltered locations.”