The first time I tried ayahuasca, my mind melted into the jungle and didn’t limp back until morning. That was in 2010, in the mountainous rainforest of northern Peru, home to the Awajun nation. I was there to report on resource extraction in indigenous territory and had no business going temporarily insane, but I’d read too much about the Amazon’s infamous brew not to wonder what it might reveal. I asked my Awajun hosts what they knew about the drug; the more I heard, the more I wondered. 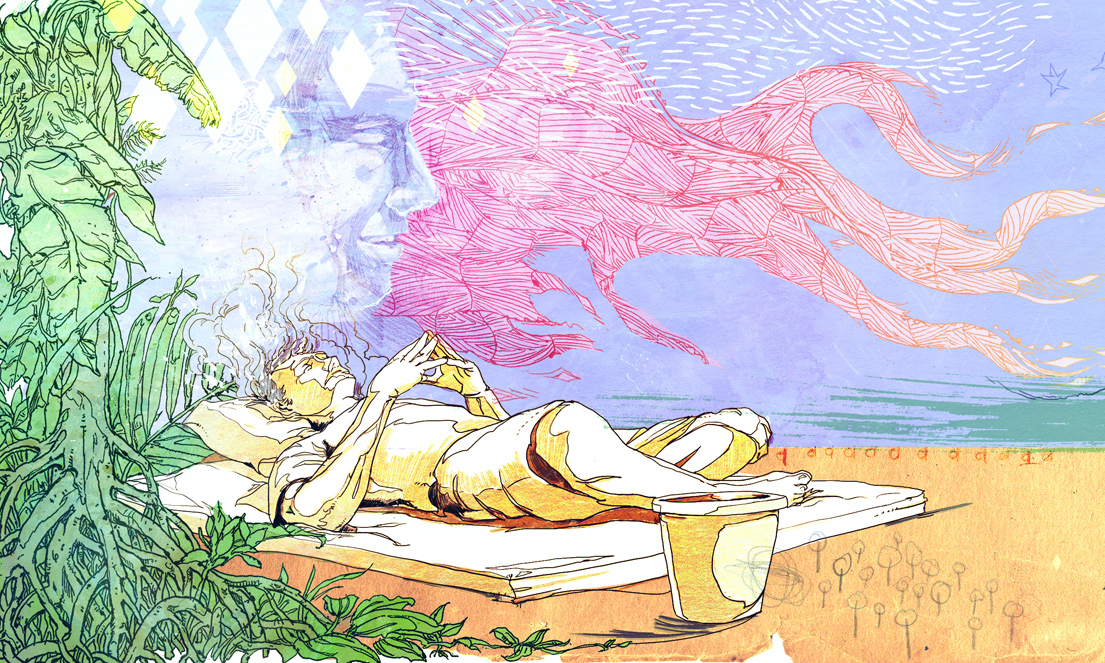 They said it was a very strong medicine, though many of the effects they described seemed decidedly non-medicinal. You could drink it to cure an abiding illness, sure. But you might also see the future or the past; connect with animal spirits; lift, or place, a curse.

I don’t doubt the elder who eventually prepared my first taste meant well, but he gave me what I can only call an over-pour. There were no visions, no healing, only fireworks and chaos (and some vomiting). And yet when the sun rose and lucidity returned, euphoria came with it. I felt light as the dawn’s orange mist, awash in love, full of renewed purpose… It took me five years to work up the nerve to try that again.

This time I went to a different part of the Amazon: Shipibo territory, down in the lowlands, where the silt-stained Ucayali River winds through the rainforest like a toddler’s doodle. A friend, who had spent time amongst the Shipibo, assured me their ayahuascero tradition was strong and safe; I would be in better hands than last time.

When I first met Alberto at the airport in Pucallpa, though, he looked more like a moto-taxi driver than the spiritual equivalent of a mountain guide. Short and paunchy, Alberto wore faded board shorts and a stained soccer jersey, his dark eyes shaded by a threadbare baseball hat. He apologized with a sheepish grin for being two hours late. Time, I supposed, meant little to a shaman.

“Our propeller hit the sand bottom and cut out, engulfing the world in thick jungle silence. Something splashed and I looked over my shoulder towards a sandbar covered in white egrets; something big was cavorting in the water between us.”

“I am not a shaman,” Alberto clarified once we were cruising up the Ucayali in the narrow skiff that would take us to his home. “I am a curandero,” a medicine man. Before I could ponder the difference, our propeller hit the sand bottom and cut out, engulfing the world in thick jungle silence. Something splashed and I looked over my shoulder towards a sandbar covered in white egrets; something big was cavorting in the water between us. “Is that a dolphin?” I exclaimed. Alberto’s smile indicated this was not the first time he’d seen a person see a river dolphin for the first time. Then our driver got the motor going and Alberto went back to explaining that a shaman exploits the non-medicinal powers of ayahuasca – what we might think of as black magic – whereas a curandero is simply out to heal.

“If you are only here to experience visions,” Alberto says, “I cannot help you.”

This was disappointing. Visions were what interested me most. I admitted that I have as many issues as the next guy, but I wasn’t here to cure a chronic illness or beat an addiction or excavate some childhood trauma. It was hard enough to explain in English what drew me to ayahuasca, let alone in Spanish; I stuck to paraphrasing Aldous Huxley and said I’d been hoping to open my doors of perception. Just not quite as wide as the last time.

“What if I do both?” I asked, seeking a middle ground. “Can I seek healing and visions?” Alberto smiled like I was a child bargaining for cookies, and nodded his assent. He was changing already, sitting taller and more self-assured, seeming more like a guide and less like a taxista with every mile we put between ourselves and the urban world. By the time we reached his village three hours later, the transformation was complete, and Alberto’s scruffy demeanor had been replaced by an air of dignified authority.

The village was named Ceilon. Alberto told me his father had moved the community here thirty years ago because the old one was prone to flooding. This one occupied what passed for high ground in these flat lands, which basically meant the river was out of sight. The jungle had been pushed back to make way for thatch huts and banana trees. They’d cleared a gravel soccer pitch that doubled as a volleyball court, over which the sun was setting when we arrived. Alberto took me to the wooden hut where I would sleep, and suddenly it was pitch black except for stars and fireflies

“Alberto’s sisters cooked eggs and fish for breakfast while keeping an eye on the pot of ayahuasca bubbling on the propane stove’s second burner. The drug would take all day to boil down.”

Next morning, Alberto’s sisters cooked eggs and fish for breakfast while keeping an eye on the pot of ayahuasca bubbling on the propane stove’s second burner. The drug would take all day to boil down. After breakfast, Alberto showed me where its two principal ingredients were growing just outside: The green Chacruna shrub whose leaves contain the hallucinogen DMT; and the woody ayahuasca vines whose bark contains enzyme inhibitors that hold the doors open, so to speak, for DMT to enter our bloodstream. “This is the medicine,” Alberto said. “Focus on your problems and the plant can help you. It’s between you and the plant. I can only guide.”

I wondered how exactly the plant could help me, how Alberto would guide. But as so often in spiritual matters, precise answers were not forthcoming. “Focus on your problems,” Alberto said again, and left me alone for the day.

Alberto had another guest, a Frenchman who had long braided hair and dreamy eyes who’d been here two weeks already and done six ceremonies. He seemed surprised that I was only here for one. He spoke rapidly and nervously about the strength ayahuasca was giving him, but the man exuded anxiety, not strength. I escaped his fevered gaze and curled up in a hammock and wondered if my decision to come all this way to hallucinate amongst strangers could itself qualify as a problem worthy of pre-ceremony meditation.

Several hours later, when the night’s cacophony of crickets and birds reached a crescendo, Alberto’s sister came to summon us. The Frenchman emerged from his hut, exultant. He looked at me and asked, “How do you feel? Do you feel like a champion? Yes, we are champions!” He had the air of a man about to jump off a cliff.

We followed Alberto’s sister to an octagonal hut with a conical thatch roof. It was pitch black inside except for the beam of a single flashlight pointing at the ceiling like a light saber. A number of mats were laid out; Alberto and his family occupied half the room – his wife, three children, two brothers. A two-litre Coke bottle, half full of dark medicine, rested on a low table before Alberto, the medicine man. He gestured to where the Frenchman and I were to sit. In front of my mat sat an empty bucket, a roll of toilet paper, and a bottle of water.

I sat. Alberto poured the ayahuasca into a shot glass and handed it to the Frenchman, who downed it and asked for another. When my turn came I had one shot. The bottle went round to the rest of Alberto’s family, including the children. Then everyone lay down, the flashlight went out and Alberto and his brothers began to sing. 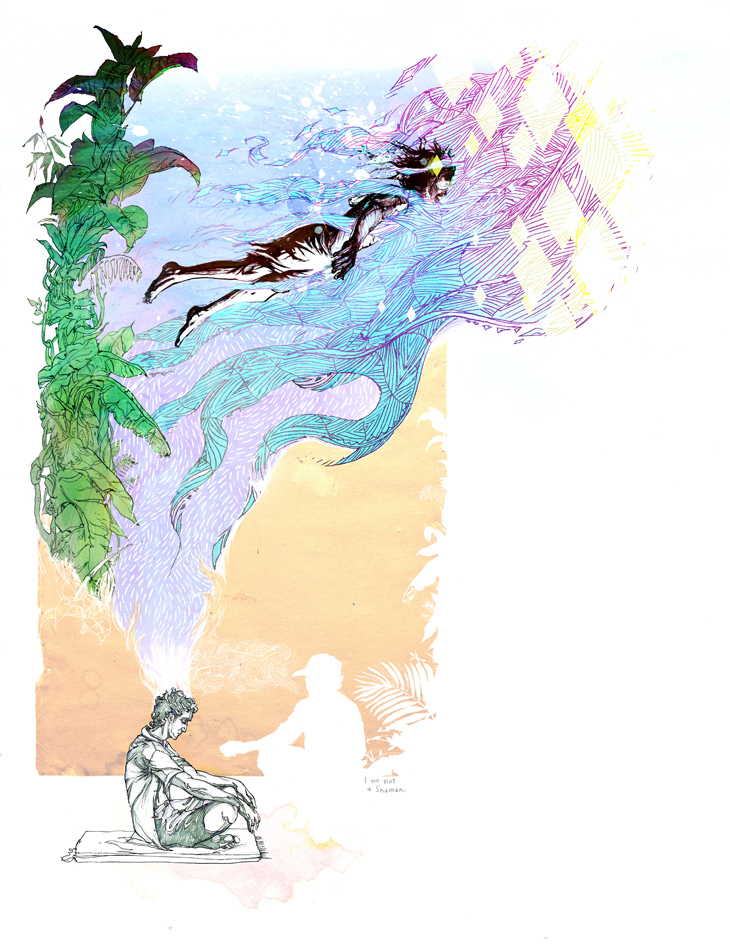 Their voices were nasal but melodious; something like a cross between early blues and Chinese folk music. Every so often a voice would pause and a match flare, illuminating a shadow bound face drawing on a cigarette. The women and children stayed quiet except for an occasional tinkling of laughter. I felt a mild swelling of nausea, but nothing like the Frenchman beside me, who by the sounds of it would need a second bucket soon. After an hour or so, Alberto went to him and asked, Estas bien? The Frenchman croaked out a Sí. Alberto bent forward and sang to different parts of his body, then lit a fresh cigarette and washed the man in smoke.

My turn came next. All I felt was the slightest tingling in my jaw and some mild nausea. The nausea lessened when Alberto sang and blew smoke over me, but I didn’t feel any higher, and told Alberto so. He asked if I wanted another sip. I thought back to my previous experience. It was the second sip that had unravelled me. But… I’d come all this way. Was I now going to let fear hold me back?

“The drug seized my eyes next, made the darkness bloom into geometric patterns. Then it engulfed my hearing and the songs that had been merely pretty acquired a profound, deeply soothing resonance, backed by the sound of the wind.”

Yes, I was. The price of admission was too high. I passed on the second sip. Alberto moved on to his family. An incongruous symphony of whispering, vomiting, women’s laughter, children’s cries, and men singing, lulled me close to sleep. I might already have been dreaming when a door opened behind me and let a cool breeze in. But there was no door behind me.

I reached back and felt a wooden wall, yet the breeze persisted. The drug seized my eyes next, made the darkness bloom into geometric patterns. Then it engulfed my hearing and the songs that had been merely pretty acquired a profound, deeply soothing resonance, backed by the sound of the wind.

Finally, the drug entered my mind, and I duplicated. I slipped out of myself. What had formerly been I became a separate awareness, observing what used to be me. When that me squirmed on his mat, the awareness saw it as someone else moving on their mat; when I thought what an odd sensation and giggled, the awareness perceived someone else thinking what an odd sensation and heard them giggle.

The awareness comprehended words, yet existed in a place beyond language. What can anyone say about that place? We all know it exists. Every culture on earth has at least one way to reach it. For a brief period of timelessness, Alberto’s technique brought me there in waves, and unlike five years ago, these were waves I could ride. But the shoreline I glimpsed, well, nothing escapes from there but metaphor. At dawn, Alberto walked into the room. I hadn’t seen him leave, but it was already time to go. I followed him out into the grey cool of dawn, once again myself.

Nothing had changed. Everything was changing. I was back in the boat that brought me here, cruising alongside dolphins and sundry river traffic toward a city, an airport, a life. I felt like a raindrop spit from a cloud, descended to earth and flowing towards the Atlantic, where all this muddy water escapes the continent to become an ocean for the sky to feed upon.