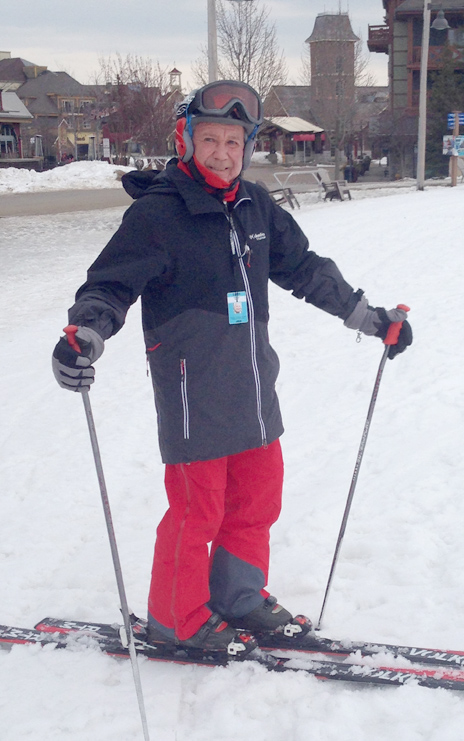 After 60 years of skiing at Blue and thousands of days on snow, Konrad Kuhn has been recognized as one of Blue’s most frequent skiers. If the lifts are turning and there’s snow on the hills, it is safe to say Konrad can be found skiing at Blue. We caught up with Konrad in-between runs to find out the story behind the man who has become this season’s ‘Man of the Mountain’.

Clad in ski boots, Konrad gladly sat down with me at Grand Central Lodge for a hot chocolate to tell me about his history with Blue. Konrad moved to Canada from Austria as a young man and remembers the first time someone showed him the Mountain. “I went to Wasaga Beach with some friends and they said, ‘See that over there? That’s where you’re going to ski!” At the time I didn’t see what they were referring to because I didn’t see anything compared to the mountains I was used to but as soon as we got to Blue Mountain in the winter time, I loved it and have been skiing at Blue Mountain ever since.”

After 60 years of skiing at Blue, Konrad has many fond memories here. “I met my wife right here at the Mountain. All our children and grandchildren learned to ski here,” recalls Kuhn. “I’ve had a Super Pass here for many years which has been great because I can ski whenever my family can visit plus I can purchase discounted tickets for the ones who don’t have a pass.” A believer in skiing being a true family sport, Konrad states, “I always say the family that skis together, stays together and this has proven to be true.”

Konrad and his wife, Irma, retired to the area and now live in an area at the top of the Mountain. “I’m able to get up, put my skis on, and get out on the Mountain every morning,” says Kuhn. “I always know I’m going to run into someone I know when I’m skiing. We meet up on the chair or in the lodge. It’s a social part of winter that I love.”

“I’m able to get up, put my skis on, and get out on the Mountain every morning,” says Kuhn. “I always know I’m going to run into someone I know when I’m skiing. We meet up on the chair or in the lodge. It’s a social part of winter that I love.”

For many years, Konrad was easily recognizable on the hill by his green coat which has its own history. “My mother made my jacket using the same material she used to cover our windows during WWII. I would wear it every day and people came to recognize me by that coat.”

Konrad shared that his children always referred to his green coat as his “pickle coat” and it will remain a special piece for him. But Konrad now dons a brand new ski outfit thanks to Columbia Sportswear who we partnered with to recognize Blue Mountain’s most frequent skiers. When we asked our on-hill team to identify skiers or riders they can count on seeing at the lift any day of the season, the team almost unanimously suggested Konrad. As Konrad himself puts it, “Every day that I am here in the winter, I am skiing at Blue.”

Konrad was able to select a new ski jacket, gloves, and pants all courtesy of Columbia Sportswear and although his friends now have to look a little bit harder to pick him out on the hills, Konrad is looking forward to sporting his gear on the slopes for many days to come.