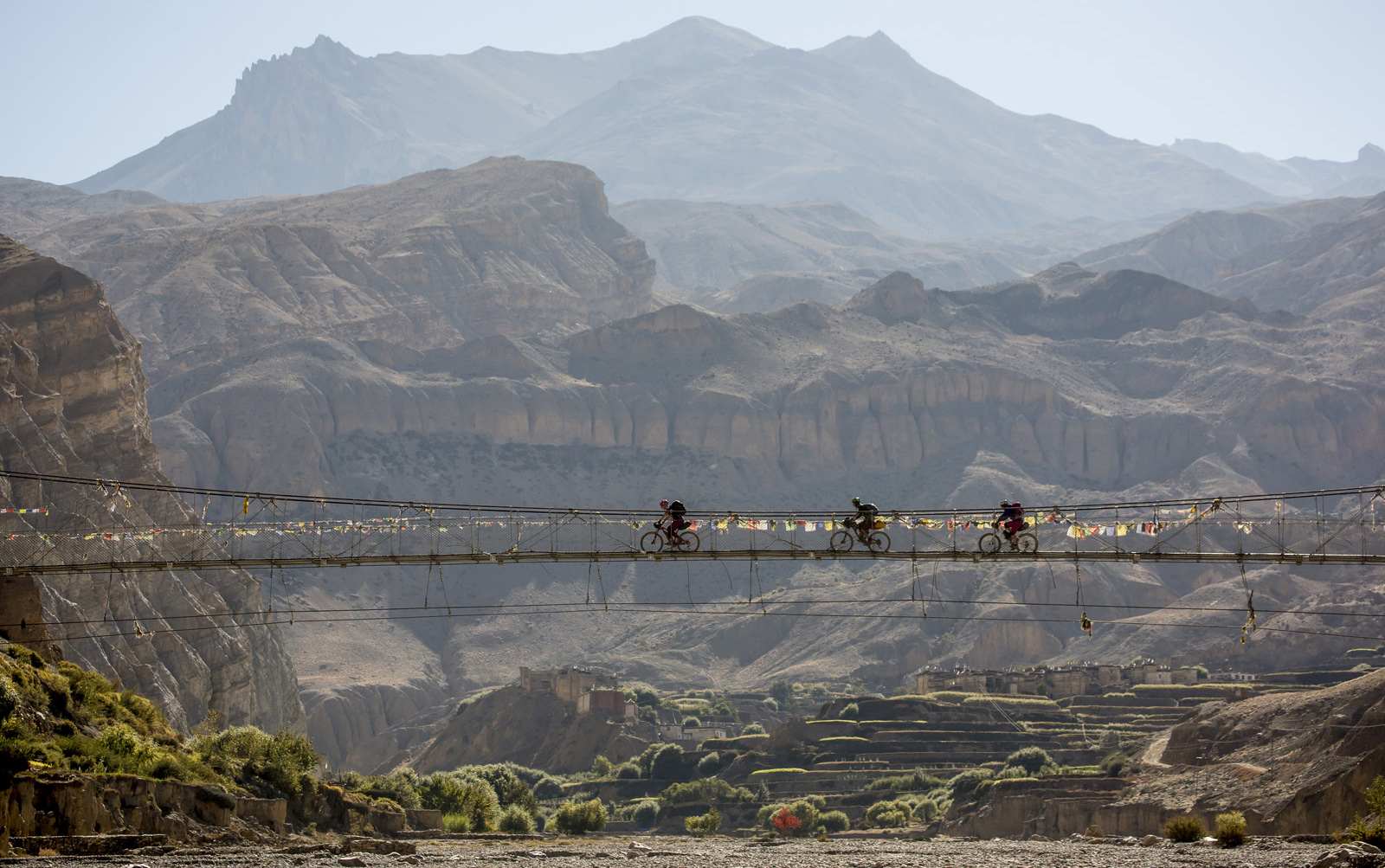 Finding Freedom in the Forbidden Kingdom: A Himalayan Bike-packing Escape

It was early July, 2015, when after almost three years of on-again, off-again turmoil, the girl of my dreams walked out the door and out of my life. I was left alone in my darkest hour and compensated with a summer lost in the mountains, a new bike, and a last-minute ticket to Nepal, booked on a whim to join three friends on a self-supported bike-packing trip.

The plan was simple: load all of our gear onto regular full-suspension mountain bikes and pedal three weeks and 500 kilometres around the Annapurna trekking circuit, through the Thorung La Pass, then follow the Kali Gandhaki river into the restricted Mustang region up to the Tibetan border. The goal was to simply “get over it.”

In April 2015, a devastating earthquake killed 9,000 people, destroyed entire villages and added more than a bit of chaos to Nepal’s tourism industry. But I figured the earthquake would also help put my problems into perspective. Figuring two pairs of underwear are more than enough for a month-long trip when you’re single, I got on the plane.

Arriving in Kathmandu at night, our senses are overwhelmed. Rolling blackouts mean electricity is at a premium and streetlights are out of the question. The van ride to our hotel is a blur, dodging piles of rubble and stray dogs in the dark. With dawn’s light, we see just how hard Nepal is hurting.

The earthquake damage goes far beyond crumbling buildings and infrastructure; in fact, most of the country has little to no damage. The more devastating aftereffects are the social, economic and political situations. Tourism is down and a blockade by India means fuel is short on supply. Gas has skyrocketed to five dollars per litre and in a land where the average income is less than ten dollars per day, that leaves many families devoid of transportation, heating or cooking options. And yet, despite the hardships, the people of Nepal are resilient and quick to smile. It feels like the perfect place to be.

Collapsing in a heap atop Thorung La Pass, I’m awestruck by the beautiful surroundings. Clear blue skies top peaks draped in seracs and icefields. Tiny villages rest in the shadows far below as a ribbon of singletrack extends between them. After a short respite to catch our breath, along with some tea and cookies, it’s time to drop in; to the tune of a 1,700-metre descent. Though these Himalayan trails were worn-in by foot, they feel like they’re made for a bike. From flowing singletrack through glacial moraines near the summit, the trail steepens into a series of loose, technical switchbacks.

Dropping off walls and down stairs, we hoot and holler all the way to a tea house patio for a break. Today’s destination, Muktinath, still sits over 500 metres below. After another cup of milk tea, we continue our descent along fast flowing goat paths, eventually reaching Sri Muktinath, a temple overlooking the city. We’ve arrived at the gateway to the Kingdom of Mustang.

Though these Himalayan trails were worn-in by foot, they feel like they’re made for a bike. From flowing singletrack through glacial moraines near the summit, the trail steepens into a series of loose, technical switchbacks.

Closed to tourists until the early 1990s, Mustang is like a whole different world. Arid hillsides, Buddhist monasteries and another language welcome us to this forbidden land. Formerly known as the Kingdom of Lo, Mustang was its own kingdom until Nepal annexed it in the 18th century. The region is an important trading route from India to Tibet, operating as a restricted, demilitarized zone until 1992 and maintaining its own monarchy until 2008.

Remote singletrack, interspersed with a rough dirt road, leads us through hidden villages and over 4,000-metre passes. The desert landscape is beautiful yet harsh; the winds batter us and dust clogs every orifice even as cool air descending off the distant Annapurna range brings a slight chill to the air. The Tibetan border is visible in the distance.

We descend to Lo Manthang, the capital city, on a rough dirt track that leads us through the walled perimeter and into the city-centre. Riding over broken cobblestones, we’re greeted by a crowd. A festival celebrating the end of harvest is just starting and Buddhist Monks of all ages congregate in the streets amongst locals and tourists. Horns blare loudly as the Monks chant and masked figures dance throughout the streets. This is our turnaround point.

Our exit from the Mustang region follows up a ribbon of single track up out of the valley. Cresting multiple 4000 metre passes, we descend to a remote village home to one of the oldest Buddhist monasteries in the world: Ghar Gompa. Though we’ve seen many gompas during our travels, this one feels different.

Inside, the room is dimly lit room and simpler than most. Thick smoke from burning incense fills my nostrils. My mind shifts back to earlier in the year and soon I realize my riding partners have all left and I’m alone with the monk. He invites me to pray. I am not Buddhist but I join him, close my eyes and inhale.

I exhale, re-open my eyes and stare into the statue of Buddha in front of me. I feel myself start to really breathe again.