An ambitious journey to capture the raw human spirit that is displayed daily in the Canadian surf scene. Dylan Maranda’s short documentary film follows Michael Darling, a surfing veteran, in a day of his life, traversing the Canadian outback to surf a hidden reef slab off the coast of Juan de Fuca. 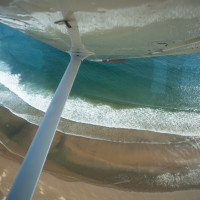 If you had asked me five years ago, the idea of landing a plane with wheels on a sandy beach to go surfing wouldn’t have crossed my mind. . . but you couldn’t have asked for a better day to fly — blue skies and a clear late-morning, August horizon as we departed from Squamish Regional Airport aboard “Frog’s Breath,”  my buddy Rory Bushfield’s fixed-wing Cessna. We knew very little about our destination other than the few photographs and information we had gathered from Google Earth — we knew there was a beach that would likely have surf… Read More