Rob Greenfield cycled through the heart of the USA from coast to coast on a bamboo bike and we should all tag along in his wake. During the 4,700-mile journey he produced just one tiny bag of garbage, never used fossil fuels, and dined on food either found, given to him, or liberated from dumpsters. You can read about his activist adventure in his book Dude Making a Difference, recently published by BC-based green-powered New Society Publishers.

Greenfield went to impressive lengths to avoid using the grid. For one leg of the journey he drank only wasted water from leaky taps and hydrants. For another leg—across the entire state of Pennsylvania, no less—he spent no money. His narrative never fails to surprise and astound with its pluck and candour.

He isn’t afraid to outline grittier aspects—he is forthright about his struggles with headwinds, bicycle-unfriendly cities, and the constant search for sustainable sustenance and shelter. (One of the more memorable moments involves a run-in with the police in New Jersey who believed Greenfield had exposed himself; this one is too good to spoil here—see “The Potty Story”, p.196.) He is often reliant on the goodness of strangers to feed him and offer him shelter; one comes away an overwhelming sense of the innate goodness of humanity when confronted with a wandering, uniquely dedicated man and his bike.

Those of us who fancy ourselves eco-conscious might feel a bit diminished by the scale of Greenfield’s efforts—while we sit around Tweeting earth-friendly ideas, we’re probably generating more garbage and using the grid more in a single day than he did during his entire mission. But rather than dwell on the shortcomings of the rest of us, Greenfield is happy to offer himself up as an example of how it is possible to live (and ride) large but consume tiny.

Rob Greenfield is a 1% For the Planet ambassador. You can purchase Dude Making a Difference (print or e-book) direct from New Society Publishers here. 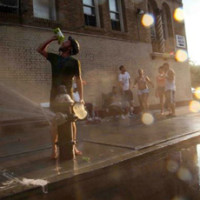 INTERVIEW: ROB GREENFIELD-SHARING HIS WAY HOME
The English language may need a new noun to define Rob Greenfield. He is an environmental activist, but neither a sign-waver nor a gonzo protester. He is an endurance cyclist, but never a lycra-clad, competitive one. He is an adventure-traveller, but very much in his own class. In the future, perhaps we will refer to a “Greenfield” when describing a focused, selfless individual who – like a secular John the Baptist – ventures far beyond Western conventions to promote earth-centric values and practices… Read more 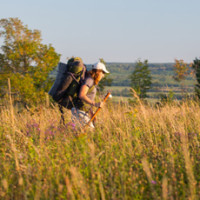 HIKING CANADA’S LONGEST FOOTPATH IN THE NAME OF SUSTENANCE
For my first meeting with Brian McLellan-Tuck, I suggest lunch at a restaurant. This turns out to be the wrong approach. Brian doesn’t eat like most of us do. It’s not that he’s a fussy eater. He’s an opportunistic eater—a forager with an impressive internal database of edible-plant knowledge—and a dumpster-diver determined not just to meet his nutritional needs for free, but to divert food from landfills. To demonstrate these commitments, Brian recently hiked the entire Bruce Trail without buying so much as a dollar’s worth of food before or during the mission… Read more