Like the tick-tocking crocodile in Peter Pan, time is chasing all of us. Even within the youthful confines of Whistler’s veritable Never-Never Land, the inescapable truth exists that life is constantly moving forward whether we acknowledge it or not. And with each flip of the calendar page, schedules fill up faster, children begin multiplying and the windows of opportunity to drop everything and escape on wild adventures with your mates become increasingly scarce. 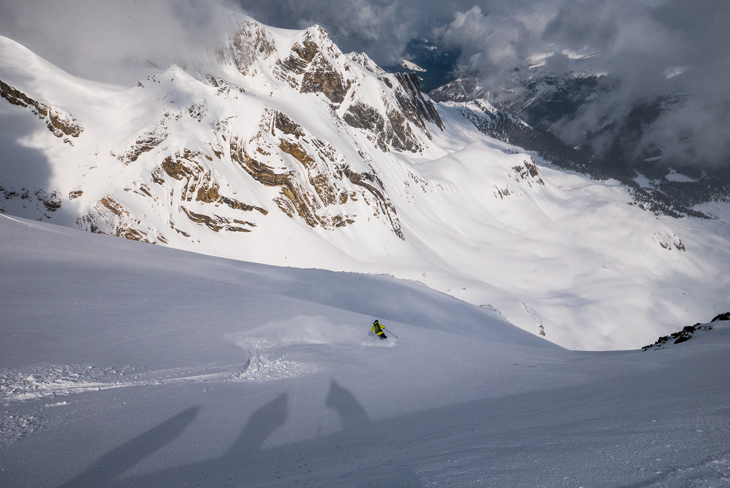 But sometimes, all the pieces magically fall into place, and when they do you simply have to let the real world slip away, seize the day and make it happen. Such was the case in April 2015 when, at the twilight of one of the most forgettable coastal ski seasons in recent memory, I was invited to join a fully organized ski touring mission to a remote fly-in cabin in the majestic Rocky Mountains. At any age or time of life, there is only one correct answer when that phone call comes.

And yet, in classic fashion, the trip was almost over before it began. A few days before our departure, one team member suddenly pulled out due to a case of “skiing-related marriage neglect.” Then, in a rapid fall of dominoes, another aggravated a cranky meniscus injury, someone else came down with a vicious strain of the flu, and I developed a case of the runs that came on so suddenly that I had to avert a poo-mergency by dropping my pantaloons on the side of the highway. In other words, “Life” intervened.

When embarking on multi-day backcountry ski missions in one’s mid-thirties, there are certain essential rules one must follow in order to maximize the chances of success.

And yet, despite the heavy presence of early warning signs, we made the call to carry on with the trip. Shortly thereafter, amidst a chorus of man-hugs, fist pumps and high-fives, we united at the heli-port in Golden, BC. When embarking on multi-day backcountry ski missions in one’s mid-thirties, there are certain essential rules one must follow in order to maximize the chances of success. The following is a simple guide designed to sustain the seasoned ski-adventurist through the transition into the “Old-Balls Years” 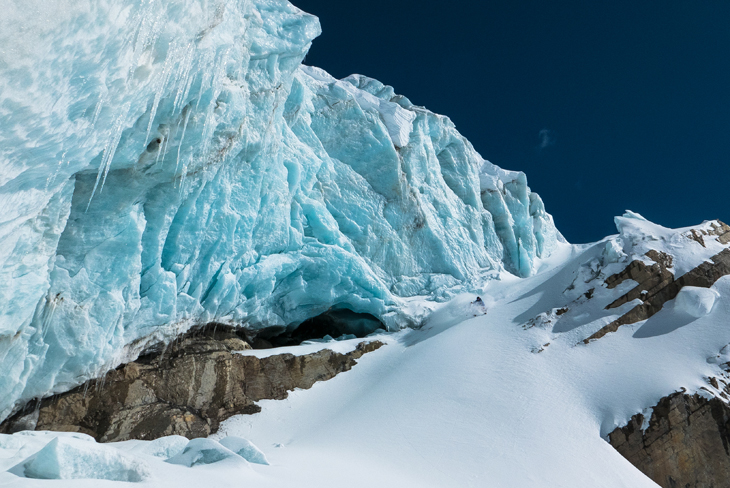 Rule #1: Embrace the Bird
One of the best parts of growing up means you are (hopefully) now old enough to afford the temporary use of a helicopter to access basecamp. The days of multi-day, sloggy, sufferfest ski-traverses are best used up in your twenties. Not only does the heli-drop aid in saving your aging, weary legs for the terrain that matters, it also allows you to bring plentiful amounts of food, and – most importantly – beer. With our chopper packed like an overstuffed burrito, we were whisked upwards, our collective stoke further fuelled by the seemingly endless sets of dramatically cut ridges, jaw-dropping spires and behemoth glaciers unfurling below. And not a drop of sweat released.

As an added bonus, you also avoid the regrettable and accidental early morning “THOSE AREN’T PILLOWS!” type of situations that inevitably come with sharing tents with your bros.

Rule #2: Beds Rule
Ditch the tent, forget the snowcave. Our backcountry home for this trip was the suggestively named Wildcat Cabin, a fully-stocked alpine abode equipped with a bounty of amenities, including a full kitchen, wood-stove, barbecue, and duvet-covered beds.

In addition to offering superior protection from the elements, the cabin provides luxurious amounts of space that can be utilized for drying out gear, aiding in the crafting of gourmet meals, and allowing five gentlemen to stroll about in their long-johns while engaging in awkward, stretching-type activities. As an added bonus, you also avoid the regrettable and accidental early morning “THOSE AREN’T PILLOWS!” type of situations that inevitably come with sharing tents with your bros. 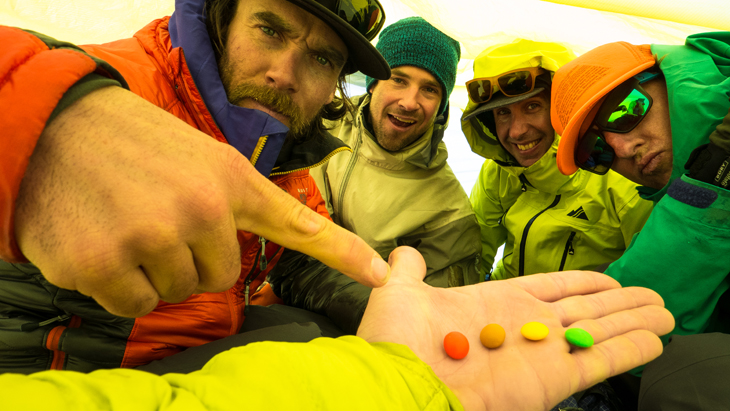 Rule #3: You Are What You Eat
Our first morning, we set out at the crack of 9:30 a.m. towards the awe-inspiring amphitheatre of north-facing peaks. Though our day’s initially lofty objective was eventually thwarted by an incoming layer of impenetrable cloudy scuzz, our adrenaline appetites were satiated by the healthy mixture of steep exposure and spotty visibility provided by a couple of spicy couloirs that we were able to navigate into on the way home.

Any day in the alpine deserves some haut cuisine. Upon returning to the cozy confines of the Wildcat cabin, we spent the evening delving into our vastly over-stocked treasure trove of edibles, consuming a luxurious buffet of smoked salmon and fine cheeses, followed by a feast of homemade burgers and yam fries. The old-balls ski adventurist requires ample nourishment to keep the ol’ motor running, and besides, we didn’t book a helicopter and a cabin to haul in Clif Bars and dehydrated dinners. 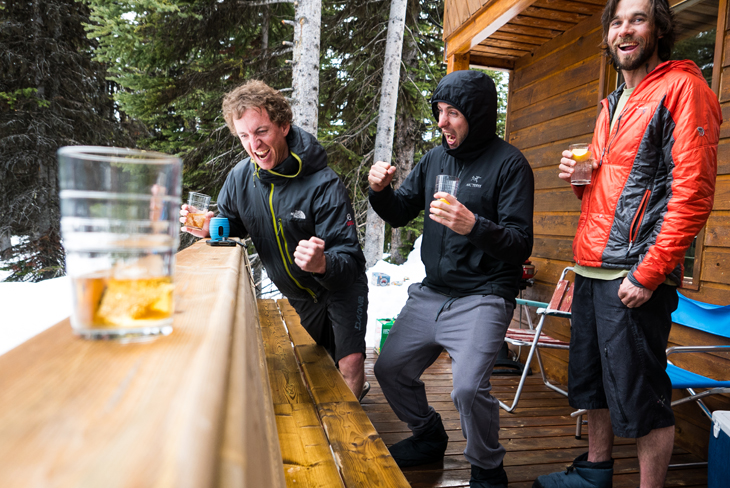 Rule #4: Sophistication is OK
On day three we awoke to the dream scenario of bluebird skies and 15 centimetres of overnight fresh. With more jazz in our step than Duke Ellington, we quickly headed out on a mission to summit and ski two of our friendly neighbourhood north faces, 2,800-metre (9186-foot) Mount Nexus and 3,200-metre (10,498-foot) Mount Baker. What followed was easily the best day of skiing in any of our recent memories; two magnificent ridgeline climbs to stunning summit vistas, each culminating in a several thousand-foot descent full of double-overhead cold smoke barrels on a blank canvas of freshly dropped snow.

We celebrated our triumphant successes by pouring fancy scotch over some several thousand-year -old chunks of glacial ice that we had harvested the day before. After a spirited debate about some important life concerns such as the differences (if any) between a Roman Helmet or an Elephant Mask, we tucked each other into bed and drifted off into heavy breathing slumber. 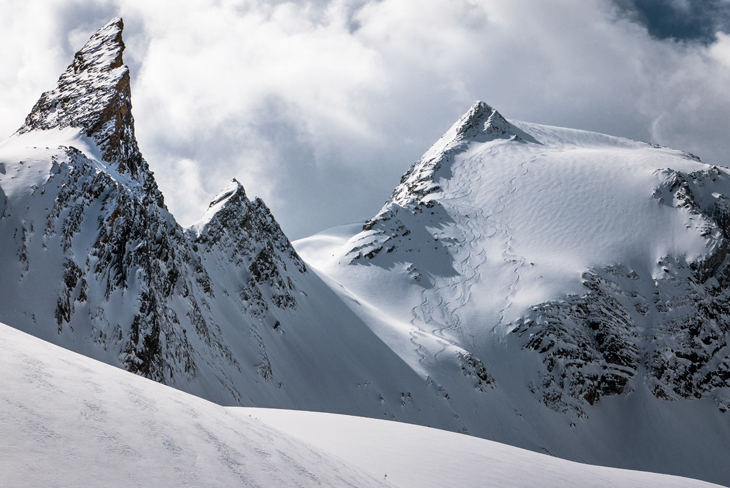 Rule #5: No Pain, No Gain
Funny how this rule is hammered into most of us as children, but it truly starts resonating once your body has a few decades on the odometer. By the morning of day four the, a choral onomatopoeia of old man sounds had begun, with each simple movement being accompanied by a NEEYYYAA or, an UNNNNGH or a YAARRRR. Despite the protests of our haggard bodies, the continued combination of clear skies and perfect snow forged a rallying cry that propelled us to the top of another local classic, 2800-metre (9,300-foot) Mount Boomerang, and down its steep and peppery north face; a puckering line that seemed like a better idea from the bottom than it did from the top.

Rule #6: Know When to Fold ‘Em
Know when to walk away, know when to run. On our final day, we set out on a pre-dawn mission to attempt to ski yet another nearby beast—3000-meter (9,900-feet) Mount Trapper, but on the summit bootpack, we began wallowing in a sea of hollow, sugary facets. Rather than ignoring the obvious red flags in pursuit of the summit goal as we likely would have a decade earlier, we took advantage of the one accumulating trait that actually works to your advantage in your old-balls years – wisdom. The call was made to abandon the mission and returned to the cabin.

We spent the rest of the morning lounging in the sun on the heli-pad, crushing our leftover beers and crafting increasingly tall tales about the trip to take back to civilization. What had been planned as the denouement to a challenging winter had in fact become the climax – the memories of an entire season of marginal skiing instantly replaced by those forged over 96 glorious hours with excellent mates in the backcountry. And the affirmation that, at any age, escape is never more than some good buddies and a phone call away. 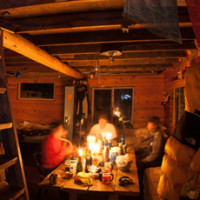 BURIED CABIN ESCAPE: WHISTLER BUSINESS WANTS YOU TO EXPERIENCE A BACKCOUNTRY NIGHTMARE
Life in a mountain town has its perks—pow slashes in your backyard, magical moments of freedom, and all the little pulses of adventure that come from a life lived within nature. But even with all the advantages, there are times when life in the mountains can get a little hectic—with great snow comes great crowds… Read more 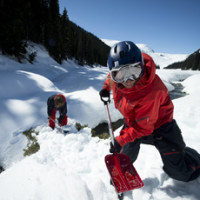 THE OTHER SIDE OF THE MOUNTAIN: GRIT, DEDICATION AND DOUBT IN THE HEART OF THE COAST MOUNTAINS
Like most adventures in BC’s Coast Mountains, this one starts at the end of a long, dusty logging road. We unload the trucks and pack our snowmobiles and toboggans full of sled gas, food, skis, camping gear and enough supplies to ski and survive for five days in rugged, isolated terrain. The plan is to sled 90 kilometres north of Pemberton to the Tchaikazan headwaters and ski Mount Monmouth, one of the ten highest peaks in the Coast Range… Read more