The “bear” necessities of life have not come easy for North America’s grizzly bears. The last known California grizzly, an iconic animal that used to roam free, from BC all the way down to Mexico, was shot in the early 1920s, after which the subspecies was officially declared extinct.

Over the next century, population numbers of the North American brown bear species also receded due to hunting and development. Nowadays, the majority of grizzlies on the continent are found in the wilds of Alaska, Montana, British Columbia and Alberta. But thanks to protectionist efforts over the last few decades, it appears these bears are making a solid comeback.

Peter Wood is the Director of Terrestrial Campaigns at the Canadian Parks and Wilderness Society (CPAWS) BC Chapter and he is one of six members of the Flathead Wild Campaign, a coalition that has come together to help create and preserve a safe environment from hunting and development, so grizzly bear numbers can continue to grow in southeastern BC, Alberta and Montana.

“On the Alberta side of the Rockies, you have Waterton National Park, and in the US it’s Glacier National Park, and this is seen as one of the best examples of cross boundary conservation,” Wood says. “Meanwhile, BC remains as this missing piece because it is unprotected, so if you’re a grizzly bear, you can wander freely from the US to Alberta, but as soon as you go into BC you’re at risk.”

“BC remains as this missing piece because it is unprotected, so if you’re a grizzly bear, you can wander freely from the US to Alberta, but as soon as you go into BC you’re at risk.”

Peter goes on to explain that hunting is the primary risk grizzlies face in BC (approximately three bears are shot every year in the Flathead area), but the larger concern is habitat loss from industry, active logging and even recreational activities such as ATVing. “Grizzly bears tend to avoid human contact in general,” Wood says, “especially anywhere there is a lot of industrial activity.”

What CPAWS and their counterparts are mainly looking for is a National Park to be extended on the BC side, stemming from the Waterton National Park, to reciprocate what Alberta is doing. Wood is optimistic and would like to see the Flathead area of BC become a refuge of sorts for the grizzly population. “In 2010 or 2011, the province announced a moratorium on coal mining [in that area], so there will be no mining, or oil and gas exploration. That was a big win and we are hoping to build on that by getting an announcement that they will also stop logging in the area.”

Grizzly bears live in the Coast Mountains as well. Brad Sills is the President of Callaghan Country, which handles 12,000 hectares of land for the purposes of commercial outdoor recreation, and he has had a long history with grizzly bears in this neck of the woods.

“We have been working with the Ministry of Environment for ten years, monitoring and cataloguing by DNA and photography, the numbers and genealogy of coastal grizzly bears during the summer months, and wolverines during the winter,” Sills says. “The study has shown the population in the Upper Squamish/Callaghan/Soo/Rutherford area to be quite healthy and growing.”

Sills goes on to point out that there are many opinions about what type of activity negatively affects the bear population, but he is optimistic about where things currently are. “Forty years ago, predation by hunters/poachers was alarmingly present. Every new logging road opened up previously pristine eco-systems. Now that harvesting is in a plateau stage and hunting is nowhere near what it used to be, habitat is recovering and in sites where conditions are favourable, populations have stabilized and in some cases are growing.”

Brad does believe that more can be done and he highlights other prevalent issues currently affecting the grizzly population. “The demise of salmon stocks is probably the single biggest threat to the survival of BC’s west coast grizzlies,” he says, adding that, as omnivores, the mountain bears do seem to have some capacity to adapt to dietary restrictions by switching to berries, grasses and grubs.

Also a long-term member of Whistler Search and Rescue, Brad’s history in the wildlife and recreation business has given him the perspective to witness a change for the better over the last several decades. “When I was younger and working in the Forest Service, I had a lot of reservations regarding whole-scale habitat destruction and the effects it would have on other species. It was pretty brutal in the ’60s to ’80s, if you were a bear. With increasing awareness and a drop in predation, the numbers we are seeing in the Upper Callaghan Valley on a steady basis are encouraging. It is becoming much more difficult to be pessimistic in the face of growing empirical data.”

Good news such as this is increasingly rare in for at-risk species in this day and age, but also very encouraging. With continued public awareness, and especially government cooperation, it looks like the North American grizzly population may escape extinction yet. 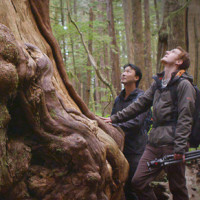 SAVING GIANTS WITH THE ANCIENT FOREST ALLIANCE
They had almost given up hope when they stumbled over the enormous trees. Activist Ken Wu and photographer TJ Watt were on a mission in western Vancouver Island’s Gordon River Valley to document old-growth, and so far had found mostly clearcuts. But as they closed in on the logging town of Port Renfrew they discovered a lonely stand of giant red cedar and Douglas fir not far from the main road… Read more 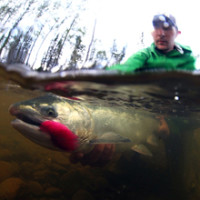 CHUITNA: MORE THAN SALMON ON THE LINE
There is something intensely visceral and awe-inspiring about the Chuitna Watershed. Deep pools teeming with wild Pacific salmon pervade the vast landscape. Oversized tracks from grizzlies and moose are omnipresent, creating an eerie feeling as you navigate through fields of fireweed. And the spirit of the native Tyonek people, who have called this land home for millennia, resonates with every flight of an eagle and leap of a salmon...  Read more