It’s dark, silent and very early. Checking the only weather forecast I actually trust, I look outside. The stars are out and a clear-sky window has emerged. It’s enough to get the ball rolling for an early alpine assault and the snow squeaks underfoot as I walk to the truck. Everything is still and quiet, the Pemberton valley sparkling under the light of the moon. It’s a long road ahead to reach the high country, but I’m inspired by dream-like visions of a mountain lit up and brought to life by the morning sun and the dawn of another big day. —Joe Lax

“There is something about pinning it up the access road at 3:30 a.m. that means business—it means you are out there to kill something big, not for a day of sightseeing in the mountains.” –Delaney Zayac

The hazards that linger in the pre-dawn darkness chase the daydreams away, forcing focus and humility. There are four of us early risers, travelling essentially blind. Other than a single snowmobile headlight, the lack of visual reference gets the senses firing. The element of fear, especially when venturing into a new area, is a stronger wake-me-up than any coffee in the world.

“A feeling I get from being in the mountains in the early (or late) hours is one of being somewhere you aren’t supposed to be. The same way you would feel as a kid when playing outside at dark and you should have been in bed.”- Bradley Slack

The darkness and the cold inspire efficient travel and as we push upwards on foot, the skies lighten and the snowy surroundings take on a pinkish-blue tinge, a filtered effect brought on by returning clouds. The lack of wind has made the morning quiet, and while calming, the dark veil in the distance puts me back on edge. I remain hopeful though — the clouds are not yet organized and the sky is still broken. The caffeine ingested hours ago has worn off, and its jittery after-effects have now morphed into a teeth-chattering chill matched with perspiration from our earlier efforts to get here before sunrise. Now that the peak is near, it’s time to be patient. I put on another layer, drink some tea, and try to convince the universe that these clouds are better suited to another geographic location.

“Racing the sun to the mountain’s peak is a fun challenge with huge rewards. Watching the sunrise as I drop into my line is as good as it gets for me. It makes getting up in the cold dark morning all worthwhile.” – Daryl Treadway

The universe is listening this time. As the glowing orb crests the horizon, the true glory of the mountains is revealed. The angle of the earth and the sun’s golden light magically expose north-facing beauty as glacial blue ice, snowy spindrift and untracked spines and ramps illuminate into life. The cold dissipates slightly and I soak it all in, knowing these moments are often fleeting.

The final push to the summit is short but sloggy – an upward swim along a wind-loaded ridge of waist-deep. Thoughts of strapping into my board fuel a pace that can’t be held for long, but it doesn’t need to be. Cresting the summit, the morning’s darkness is now a distant memory – bed, alarm, tripping over the kid’s toys in a lame effort to be quiet, tree line sled manoeuvering and pitch-black glacial navigation – it’s all forgotten. We are here as the dawn transitions to day and an amphitheatre of opportunities presents itself. The stars have guided well.

“Some of my most memorable days in the backcountry have started in the dark. No distractions or anything else to sidetrack you in the morning – just you and your posse rolling out to pillage the goods!” – Dave Basterrechea

The golden hour is in full effect and it lights a wall of convex spines and steep ramps. I ingest the moment and quickly drop in. With each turn, a backlit spray shows against morning sky. I start to peel cross-slope, sending slough off the cliffs below. The thundering sound is amplified and I watch in awe as the slough plume hits the glacier below. I keep cutting out of harm’s way before turning back into the fall line and pointing it to the valley below, stopping only at the bottom to admire hours of work and adventure transformed into a single line down a mountain. The moment is pristine and perfect, but just that, a moment. Just as I start to get comfortable, the clouds pull the curtain and the landscape transitions from gold to grey as if nature just hit the snooze button. The mountains are like us; they aren’t truly awake until the sun shines upon them. 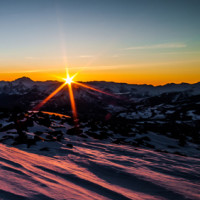 TORTURE TO THE TUSK: A JOURNEY TO THE SEA-TO-SKY’S MOST ICONIC PEAK
Not every man will admit to breaking down in tears, let alone actually do it in front of his buddies. After ten hours of towing a 50-pound sled through knee-deep powder, Whistler photographer Sean St. Denis was that guy.
Quit. Screw them.
Quit… so not worth the time and energy…. Give up… With shaking legs and burning hip flexors St. Denis sank into the snow and sobbed.… Pussy…. Read more