In the depths of last winter’s prolonged freeze, I accompanied photographer Jason Van Bruggen on an early-morning shoot on top of Blue Mountain. Where Maple Lane dead-ends, we met Jason’s friends – and photo subjects for the day – endurance runners Mindy Fleming and Matt Leduc. Here where the Bruce Trail snakes along the high Escarpment, and later that day in the crevices of Metcalfe Rock, Jason shot these athletes amid some gorgeous but punishingly cold winterscapes. Afterward, as we warmed up in a Thornbury restaurant, I talked to Mindy, Matt and Jason about the polar vortex and the all-season sport of endurance running. —Ned Morgan

Is there a difference in your workout during this extreme cold?

Mindy Fleming: Running in extreme temperatures takes a lot of energy out of you. You’re fine when you’re out there generating heat. It’s when you stop that the cold immediately hits you. You’re restricted by all the layers of clothing. You can’t get the same movement as you would in shorts and a singlet. In really bad weather, we put screws in the bottoms of our shoes so we have full traction on the ice and in the snow.

Matt Leduc: It does take a lot of energy but also when you’re wearing that much clothing, it’s impossible to put in much of a workout. For me the biggest impediment is being weighed down by three layers of pants, and big heavy shoes. 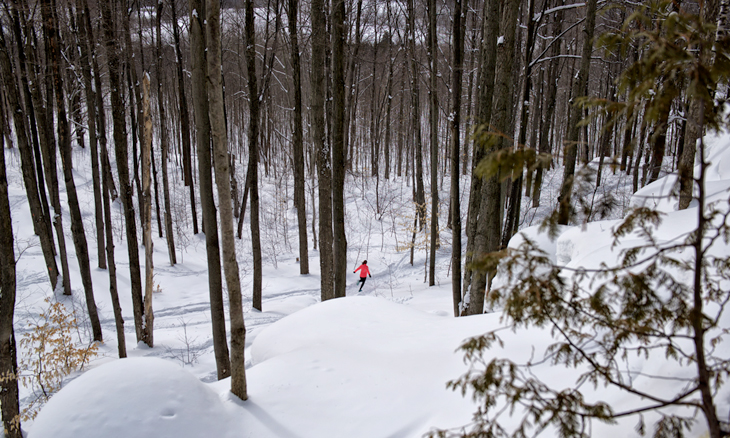 Tell us about how you ended up in endurance and trail running.

Mindy: I’ve been running since 2009. I picked up running for health reasons. I used to be a smoker and I ate the typical North American diet. After I became a vegetarian my family didn’t believe I would be strong enough to run. So I wanted to show them I could be an endurance athlete on a vegetarian diet. These days I find my endurance is improving from doing a lot of cross-training, not strictly running. My best training was the year I did Ironman [Mont Tremblant]. For a race like that, training is not about speed—for endurance, it’s all about slowing the pace down and enjoying that time outside with people you want to be with. Or running alone and either listening to music or a podcast, or just thinking through things through. You get endurance from spending the time on your feet.

Matt: I started running when I was eight, aping my older brother. I was out training while other kids were playing video games. Later on, I started trail running as training for marathons. You have softer ground, it’s easier on the body, more picturesque and more sociable, because all the challenges in trail running – the routes, the rocks, the hills – slow you down. About five years ago I started training for the Comrades Marathon in South Africa. It’s generally heralded as the largest ultra marathon in the world. In preparation for this 90km race I was doing four-and-a-half hour training runs. And since that time I find I can get into a groove and just keep going …and keep going. It’s not really a question of speed; when I’m running at an easy pace, I feel like I can go on forever. In competition, on the other hand, it’s a matter of how fast I can turn my legs over. 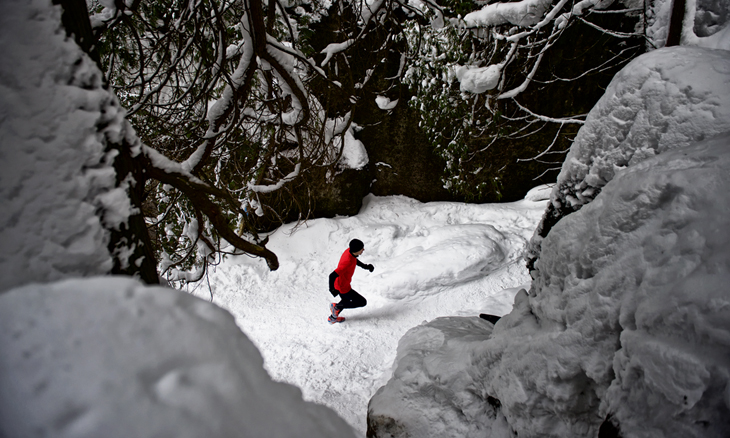 “If I stumble now, not only will I not finish the race, but I might be in a cast for the next six weeks.”

Mindy: In terms of endurance, my longest is Ironman [Mont Tremblant], a 3.8km swim, a 180km bike, and after all that, a full marathon [42.2km run]. Matt and I went with a group of 30 people and depending on who you ask, everyone will have different opinions on how gruelling it was. Matt and I both wanted to qualify for Kona [Ironman World Championships in Hawaii] and place in our divisions. So we put a lot of pressure on ourselves. But a couple of my friends wanted to have fun with it and so they finished together while holding hands – so they wouldn’t describe it as gruelling. But definitely Matt and I would because we tackled it in a different way.

Matt: I broke my foot about two and a half months before Ironman – a stress fracture, a small break, but it meant that I didn’t run until about two weeks before the race. So for me the toughest part was the marathon, especially the second half, from about 25km forward was just terrible. I hated every step of it.

Mindy: The swim was my weakest event. And the mass start was very intimidating. Even though I was going out to try to place and be top three, I started at the very back of the swim because how many people compete in that?

Matt: A couple thousand, all getting into the water at the same time.

Mindy: And you’re all entering the same body of water at the same time when the gun goes off, and I was terrified of that. I held back and when people started to make their way out I then got in and found my own area. On an Ironman swim you get punched in the face, you get kicked, you get pushed – it’s intense. It’s part of the swim.

Matt: My family members who were watching said the lake looked like a washing machine, with so many people churning through the water. 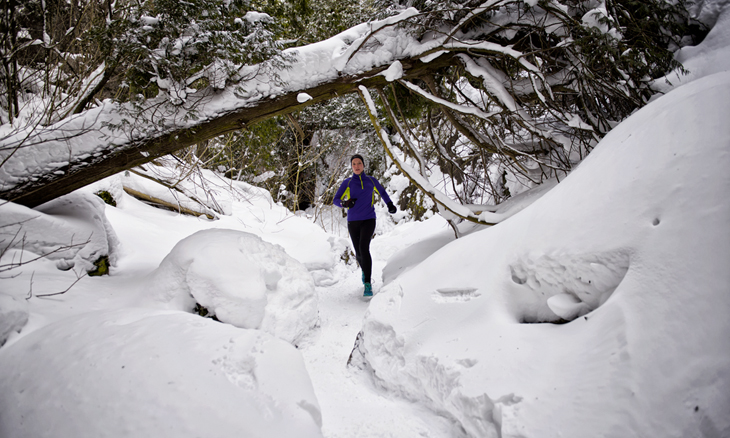 “We do a lot of work in the Arctic, and this was cold even by those standards.”—photographer Jason Van Bruggen

You each placed first in your respective genders in the 2014 North Face Endurance Challenge 50km trail race at Blue Mountain. Tell us about it.

Matt: That hill is really unbelievable. And to have to run up it three times in the 50km. There’s a general logic that if you’re doing a trail ultra-marathon, you walk up the hills because the energy you expend in running doesn’t equate to the time you save. But I have a big ego I guess and I was going to run every single hill. It was really tough.

Mindy: I don’t know what was more painful – the mental or the physical aspect.

Matt: Although the uphills were brutal, my slowest kms in the Endurance Challenge were going down the hill, on a very technical section; in the late stages I was exhausted to the point where I didn’t trust my footing.

Mindy: In that section, late in the race, you don’t know if your legs will give out or not. You’re thinking, “If I go faster, will I wipe out?”

Matt: Climbing is terrible mentally. Every time you round a corner and you see more climbing, it just crushes your spirit. But going downhill is terrifying. You’re thinking, “If I stumble now, not only will I not finish the race, but I might be in a cast for the next six weeks.” Whereas if you fall uphill, you’ll probably just get bruised.

Mindy: I did not know my placing until after I crossed the finish line. And Matt didn’t know until after he finished that he was an hour ahead of the second-place male. 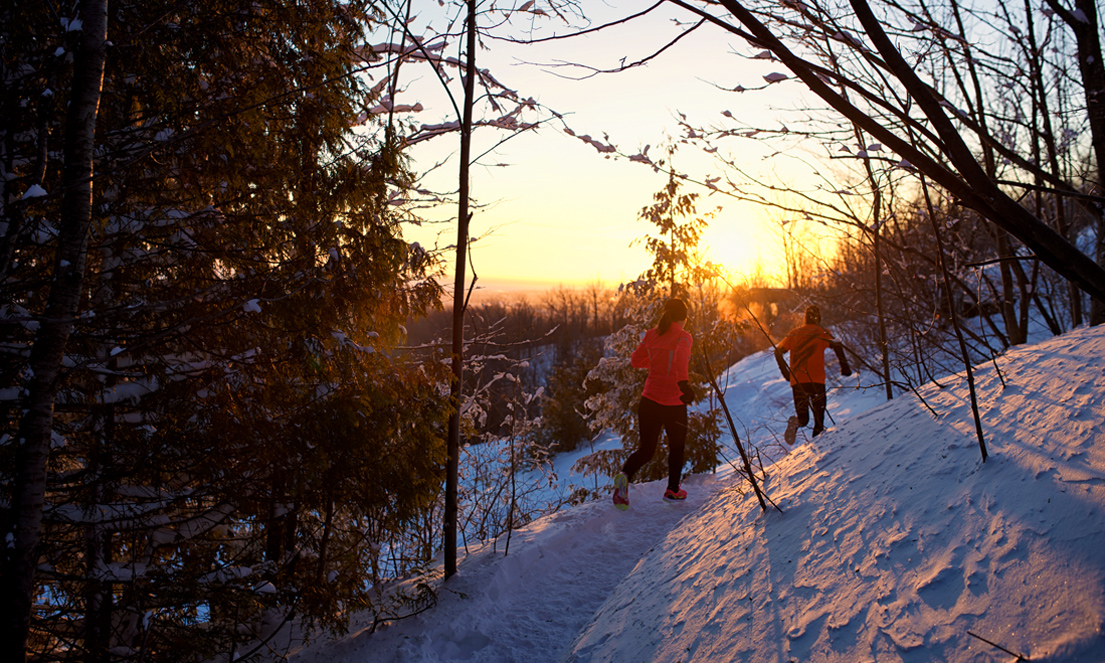 How do you approach the mind game of competitive endurance running?

Matt: When Mindy and I go for a run, it’s really enjoyable, we’re just chatting. In a workout, I focus internally – assessing how fast I’m running, whether I’m comfortable at that speed. But in a race I’m far more focused on what’s happening externally. It’s more, “Can I pass this guy on this hill?”

Mindy: It’s crushing when you’re happy with your performance and how you’re racing, and then you get passed. And then passed again. So you have to be strong mentally to stick with it, because even though those people are passing you in the early stages, later on – two or three hours into it – you can reel them in and take over. These are long races, and a lot can happen over that distance. 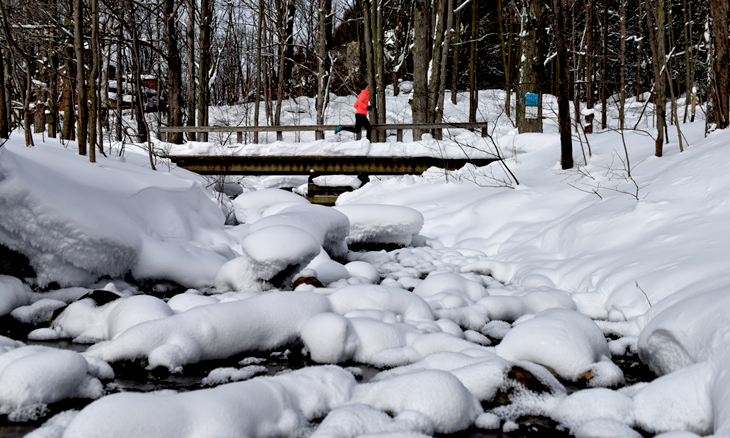