As a follow-up to its first fat bike freeride video, Rocky Mountain Bicycles just dropped 2 Fat 2 Furious. Shot at the Coquihalla Lakes Lodge, Kamloops Bike Ranch, and Coast Mountains, B.C. the film sets out to prove you can ride things that would be next to impossible on a regular bike.

From waistdeep powder to drifty sled tracks to packed down jumps, the boys achieved just that. Geoff Gulevich, Wade Simmons, and Noah Brousseau got rad all winter.

“We were having fun ripping around on the snowmobile tracks but looking at all the pow chutes surrounding us it was only a matter of time before we were dropping in—we just had to figure out lines that were steep enough to stay afloat!” — Wade Simmons 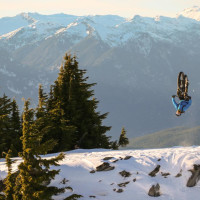 At first, Rocky Mountain admits they were hesitant about the fat bike trend. There were definitely a few raised eyebrows in the office when they started designing and testing one. Wade Simmons was an instant convert: “Everyone thinks they’re so [email protected]#&ing cool and serious, but it’s really just about having fun on your bike anyway.” And soon enough, the other guys stopped returning their test bikes on time… Watch the video 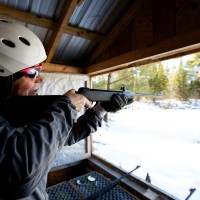 FAT BIKES AND GUNS: THE BIRTH OF A BIKEATHALON

It’s not what it sounds like, but there are fat bikes and guns. The community of zany riders at the MTB Kingston trails is up to something a little outside the box, even for fat bike riders. As if riding bikes in sub-zero temperatures on snowy trails wasn’t niche enough, the mastermind of MTBK and director of trail development came up with another excuse to get a group of riders out on the snow every Sunday morning… Read more