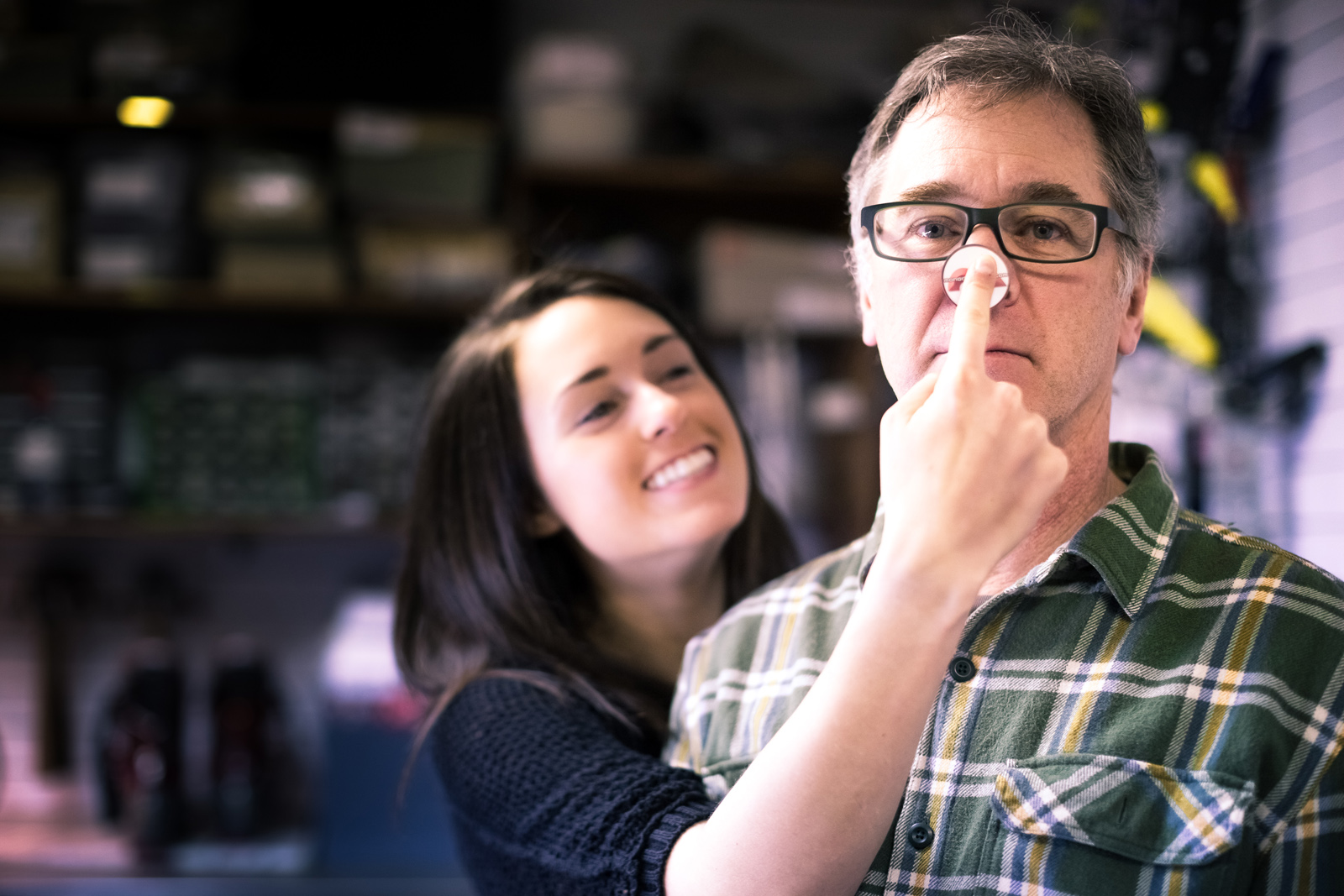 It’s the same home that Tatum Monod grew up in. And though a hint of what that might have been like resides in being a target for much of Peter’s ribbing, she gives back as good as she gets. It isn’t the usual father-daughter kind of banter—more what you’d expect between buddies on a chairlift, or a couple of pro skiers. No surprise, then, that both fit the bill.

Peter was a member of the Canadian Alpine Ski Team, quitting at 22 years old, an age at which most candidates have yet to make the team. Tatum, 21, a former racer on the Alberta Alpine Ski Team, is a rising sponsored freeskier who has transplanted—as most do—to Whistler, current centre of Canada’s freeski universe. Probe around these memberships and you quickly discover that Peter and Tatum are but two genealogical rings from a pebble dropped in a dark, long-forgotten pool that became the western Canadian ski scene.

As it turns out, Peter, older brother Phillip, younger brother Nick, and half-sister Stephanie Townsend all made the Alberta team and three went on to join the national squad: Stephanie during the Nancy Greene era of the late ’60s; Peter and Phillip in the fall of 1976. Phil hurt his knee that first season, in the days when such injuries didn’t get repaired, forcing him to quit. Their father Johnny needed help at his office, so Phil threw his lot in there. The office was a store called Monod Sports, the business Johnny started in 1949 at Sunshine, the remote backcountry ski lodge where he guided and taught skiing after emigrating from Switzerland in 1947. Johnny’s guiding, instruction, retail and ski-area expertise were also instrumental in the histories of Lake Louise and Mount Norquay ski areas, as they had been in Chamonix, where he’d opened his first sporting goods shop with future Aspen legend, Fred Iselin, in 1931.

Those numinous waters of history harboured an entirely different ski universe, one Tatum was only vaguely aware of. “People would say things to me like ‘Oh, you’re a Monod?’” she recalls. “I grew up hearing stories about my grandpa pioneering skiing in the Rockies. I knew I had big shoes to fill.”

Big indeed. And here we were, gathered over spaghetti bolognaise, in a virtual cradle of Canadian ski history, with two of its smiling scions telling each other to shut up.

Like many an acolyte, I distinctly remember standing outside Monod Sports on my first trip west, eyes fixed on the window displays, a kid in the kind of candy store Toronto didn’t have. I eventually moved to Banff for a winter, buying a pair of skis and my first real climbing rope at “Monod’s,” as it was known to locals. Today, entering Canada’s oldest family owned and continuously operated ski shop seems like the same wide-eyed pilgrimage it was in the ’70s and ’80s when Banff was the Mecca that drew eastern skiers west. A veritable outdoor department store, still every bit the cut­ting-edge specialty shop with one-on-one service it was meant to be. The past hovers here as well; tucked into corners and stairwells are historic photos of Monod glory, replete with race bibs and trophies, skis and other memorabilia. There are especially heartfelt tributes to paterfamilias, Johnny Monod.

Like other Swiss guide émigrés, Johnny was attracted to the Canadian Rockies by beauty and opportunity. He set up his first shop here at a tiny backcountry lodge (now Sunshine Ski Area), where, after guiding and instructing for the day, he’d open the shop to offer exclusively imported equipment and clothing not yet available in North America. A fire in 1956 precipitated a move to town, where the shop quickly became Canada’s leading source for quality outdoor clothing and footwear, skis and racing products, climbing equipment, fly-fishing gear, and the expert advice accompanying it all. An emphasis on finding the highest quality items for every activity—no easy task in the early days—continued into the modern era.

“For a long time I’d travel to Europe twice a year to find product,” recalls Peter. “Originally, if you wanted to be a ski mountaineer in Banff, there was nothing available. So we brought it in. We were the first in North America to have the Dynafit system. Climbing was a huge emphasis: Royal Robbins and Yvon Chouinard used to come in and purchase gear on their way to the Bugaboos.”

Although brothers Phillip, Peter and Nick all worked for Johnny during summers, transitioning to the family business had by no means been guaranteed. Phil had made the move, as did Peter when he finally tired of National Team politics in 1981. “After a week of work I liked it—I didn’t have to get up early and was making money.” Nick had already been on board. Johnny eventually made arrangements for the trio to form their own company and buy the place in 1982. The multi-level, award-winning shop they operate today was finished in 1989.

Though Phil retired in 2011, Nick and Peter run the business, where Tatum’s brother Nic also works, honing the digital end. Though immersed in a ski career, Tatum’s ties to the store are zap-strap strong. “Retail is in my blood. I used to go to the shop on my way home from school and fold clothing on the women’s floor,” remembers Tatum. “People didn’t know what to think of a 10-year-old working on the sales floor. I’ve worked there fulltime in summers, and even living in Whistler I still try to help out with the buying. It’s a family business; we all chip in.”

Certainly Tatum has already done her fair share of transitioning and adapting.

“I grew up snowboarding and doing gymnastics. Skiing wasn’t something I got into until I was 12, but I really went after it. I qualified for the Alberta team at 15 and from there it was all about racing: I trained in the gym six days a week and travelled internationally for months at a time.” Eventually her passion for skiing eclipsed her tolerance of confinement. “All I wanted to do was ski but I didn’t want to be confined in a race course. I followed my gut [into freeskiing] and haven’t looked back.

Spurning the family racing dynasty? “It’s awesome,” enthuses Peter. “The only other ski option I might have had was freestyle—but that wasn’t going to happen. Can you imagine wanting to be Suzy Chaffee?”

Peter sees freeskiing as the most important part of the ski industry, and he has been around long enough to sound sage on the matter. “FIS is all about numbers, but if you gathered the opinions of all the most important ski racers and delivered them to the FIS they would still have zero influence on how the sport is done, or what you wear. Freeskiing is different in that athletes come up with the ideas that hit the market. Innovations aren’t just coming from Europe anymore, they’re coming from freeskiing hubs. Ski companies have product development meetings in places like Whistler because most of the athletes are based there and can contribute.”

An enthusiastic supporter, Peter was quick to embrace and sponsor local freeskiers like a young Eric Hjorleifson. “Hoji almost put me under single­handed—he broke nearly everything he touched. My god could he wreck gear.” And while nothing has changed in that department, much has ad­vanced in the freeski milieu—including the chance for talented athletes like Tatum to make a living by promoting what they love in photos and film. In 2012, Tatum became the first female freeskier to land a double backflip in the backcountry—a very different backcountry than the one Johnny knew.

I grew up hearing stories about my grandpa pioneering skiing in the Rockies. I knew I had big shoes to fill.

BACK TO THE FUTURE

When you leave the Lake Louise Ski Area for the 11-kilometre tour into historic Skoki Lodge, the trail rises gradually under the impressive limestone ramparts of Redoubt Mountain. The trail through sub-alpine forest is pleasant, despite the inevitable wind on Boulder Pass where we stop to reconnoiter. Tatum is unsure of this mission: she has never been to Skoki, and it’s a long way with skins on heavy alpine gear. The first commercial lodge to cater specifically to ski tourists in North America, Skoki was built by Banff residents who formed the Ski Club of the Canadian Rockies to manage it; the first guests had arrived 82 years ago in the spring of 1931.

Below, crossing the lake toward us, a lone skier plods resolutely against blowing snow. Dropping onto the lake, Tatum reaches him and stops to ex­change a few words before moving on. Trailing behind, I soon pass a short, ruddy-faced man with a big smile and an ice-covered toque. I compliment him on his classic wooden touring skis. Two days later I’ll find out this was George Tutt, owner of Mountain Lights bookstore in the Chateau Lake Louise, purveyor of both modern and antiquarian volumes, his occupation since leaving the post of general manager at Monod Sports from 1973 to 1980. “Johnny was a great man and it was wonderful working for him,” Tutt would tell me, before reminiscing about how they would butt heads in the office, worrying the other staff with their shouting, then, having resolved the quandary, head across the street to lunch together. It is a paean to the vast wilderness of the Rockies that George and Tatum could pass each other in a blizzard and chat without having any idea of their connection.

After a long, slow slog up Deception Pass it’s pretty much downhill, cleaving between 3,059-metre Ptarmigan Peak and 2,946-metre Fossil Mountain, then along a creek and into a meadow. Arriving at the varnished-log lodge, frocked in snow and buried deep in a valley beneath majestic peaks, always feels like going back in time. The interior, as well, remains virtually unchanged: wooden skis, poles and snowshoes adorn a large stone fireplace, and the aromas of fresh-baked bread and homemade soup stir the air; pleasantly worn skiers lounge around with books while kerosene lanterns burn in wood-framed windows. A timeless cliché. And another: among black-and-white photos adorning the walls we find Johnny Monod, skis in one hand, cigarette in the other, staring nobly into the void. His first two winters in Canada, Johnny guided here for caretaker Lizzy Rummel, humping in supplies when needed, legendarily charged with carrying the eggs because he was the smoothest skier. Tatum instantly forgets the slog we’ve just endured. “I’d heard stories about my grandpa spending time at Skoki but seeing his photo on the wall really puts it in perspective.”

Tatum takes a photo of the photo with her phone, a modern moment that will result in the inevitable Instagram back in Lake Louise: I ski toured into a remote backcountry cabin only to find a picture on the wall of my grandpa being a total badass back in the 40’s. #legend #dartinonehand #skisintheother #skoki #alberta

Monod’s Legacy intact. And not just the eponymous trail sign erected in 2011 on Mount Norquay. That legacy now seems less about deed than familial connection. Those concentric rings. Days earlier, in the store’s ski workshop during the inevitable father-daughter photo shoot, Peter and Tatum had wrestled over everything from binding mounts to a Monod Sports sticker. Forever clowning, Peter held the spinning end of an electric drill to his head. “This is what it feels like working with Tatum,” he’d quipped.