As a 19-year-old skier, she discovered the meaning of life: Ditch the gates, charge hard, make movies, have fun—and never get an indoor job. Twenty-five years and two kids later, the creed still serves her well. 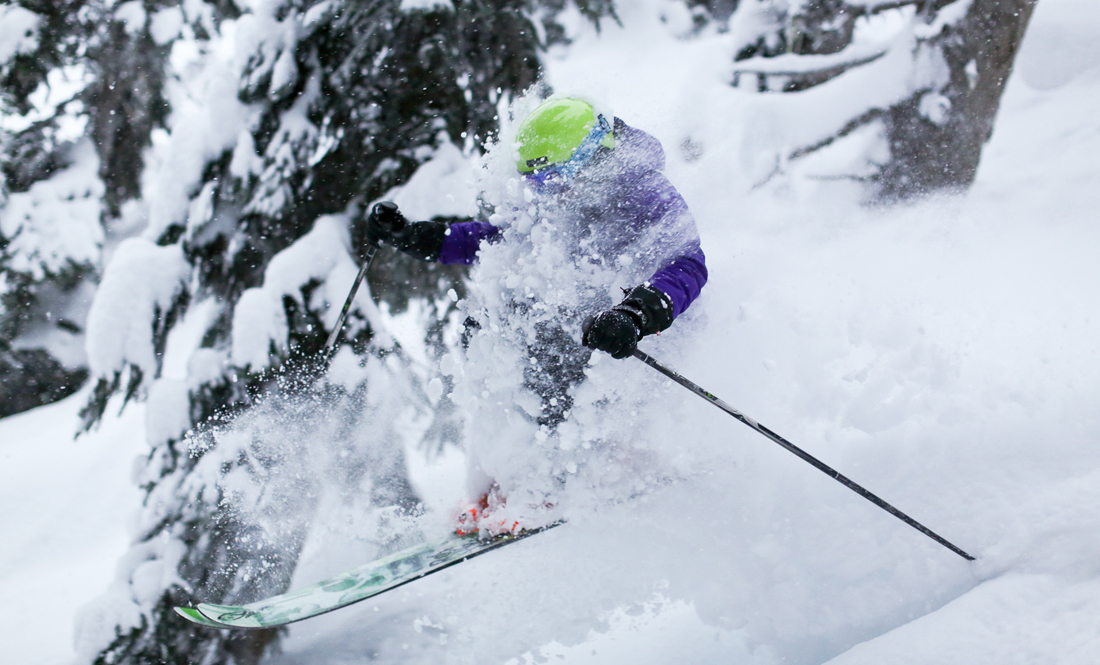 When Wendy Brookbank quit ski racing, she figured that was it—no more free pairs of skis. How was she to know, at 19, that she was about to become one of freeskiing’s founding women?

Trained as a ski racer back east since she was 10, Wendy recalls an early trip out West.

“Big mountain to me meant avalanches. One year we had the Canadian Championships at Red Mountain and the downhill was cancelled because there was too much snow. My coach took me up Granite to powder ski, but I begged him to take me back down to Red so that I could ski the gates instead.”

There wasn’t even such a thing as freeskiing in 1988 when Wendy migrated to Whistler to take a year off before University —just another Ontario racer planning to “get skiing out of my system.”

She had just finished a beer in the sun with a buddy and was about to drop into another lap of ‘Jump for Joy’ above the 7th Heaven T-bar line (“it was an ’80s thing to do”) when the biggest star in skiing introduced himself.

“My name is Glen Plake,” said the infamous mohawked dude, as if Brookbank didn’t already know. “I work for a filmmaker named Greg Stump and we’ve been watching you ski.”

After being “discovered” Wendy hung out with Plake and the Blizzard of Ahhs film crew that spring and was invited to travel and film the next winter with them as “their main girl.” But Brookbank was enrolled at UBC in a Kinetics degree – a frustrating year constantly interrupted by phone calls from Stump or ski writers from the likes of Powder magazine. 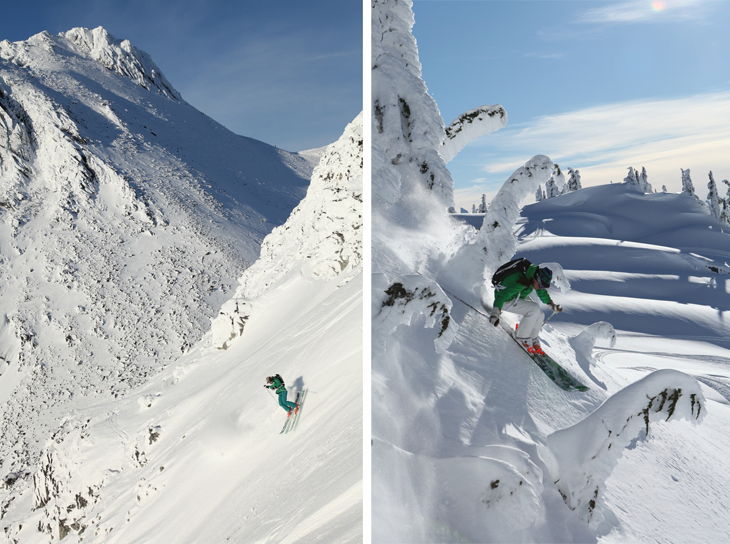 “So I took the next year off, but Greg didn’t have funds to make a film. But that’s when Warren Miller came to town…”

Twenty-five years later, Wendy has lost count of how many ski films she was featured in. (And who has a VHS player anymore, anyway?) From Pehota to Peterson to Haakonsen to Warburton, she has shared the screen with many a legend but these days her daughters remain unimpressed with those “extreme skiers.”

“I hated them. I thought they were sexist. The boys were all skiing and doing great things and the girls were standing around in tight suits and poofy hair.”

“My kids said, ‘I can’t believe those were the best skiers at that time, because they’re not very good,’” Wendy says. “They think to be good, you have to be taking two turns down the mountain, not two hundred.”

Despite the accolades, Wendy never aspired to be in Warren Miller films. “I hated them. I thought they were sexist. The boys were all skiing and doing great things and the girls were standing around in tight suits and poofy hair. I did it for the free ski trips. I did try to make a difference to that culture. I’d say, send me a size ten or 12 ski suit so I look like one of the guys, but they’d send a size eight Descente one-piece.” 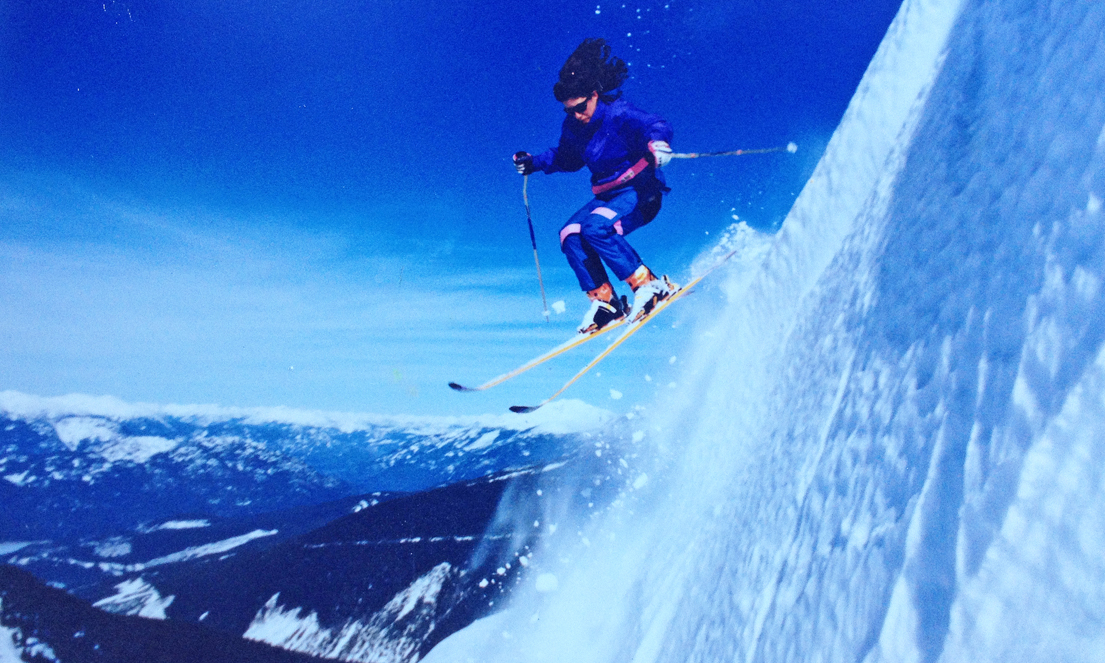 She didn’t feel like she was blazing a trail for freeskiing women. “I felt like the lone girl in this world of boys, just trying to keep up.” But not long after her tenure, filmmaker Christian Begin shot No Man’s Land with a roster full of female athletes. “Maybe, by me asking for it, it made things a bit easier for the next girls to come along.”

In 1994, Whistler visionary Peter Smart approached Brookbank about a new program he had dreamed up: Extremely Canadian Steep Skiing Clinics. “I didn’t like the idea at first because I didn’t want a day job.  He promised me we could get a free pass and not work that much. We guided six days that first season for our free passes. I was in.”

“I love to assess the skier and then push their boundaries as much as they are comfortable with. Even expert skiers can learn some tips to make it ‘easier’ and therefore way more fun. And skiing is so much fun.”

And she’s still in. Wendt finished that kinetics degree but she doesn’t use it that much. Instead she rips as hard as ever as one of Extremely Canadian’s go-to guides. “Whistler and Blackcomb lend themselves beautifully to being guidable mountains” she says. “They’re big and even though there are ropes, signs, patrols, grooming and Avy Control, there are still ways to get yourself into trouble up there if you are poking around as an advanced or expert skier. I love to assess the skier and then push their boundaries as much as they are comfortable with. Even expert skiers can learn some tips to make it ‘easier’ and therefore way more fun. And skiing is so much fun.”

Twenty-five years after Glen Plake changed her life on top of ‘Jump for Joy’ Brookbank has no regrets. “Never. Are you kidding? It’s been an amazing 20-ish years. I’m 43 years old and I still get free skis.”