On December 6, 1980, Blackcomb opened for business. The first few years of operation were lean — conditions were difficult and it wasn’t easy being the new mountain in town, with well-established Whistler Mountain right next door.

I logged my first days as a Blackcomb employee working as a ski instructor, coaching for the Nancy Greene Ski League, but I was always envious of the Blackcomb Ski Patrol. They spent their days skiing powder, throwing bombs, saving lives, and breaking hearts. 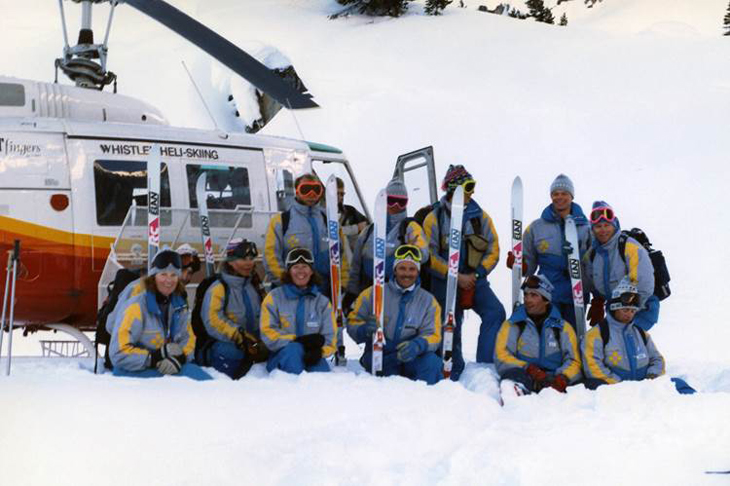 Ken Newington (Newt) started working for Blackcomb Mountain in the summer of 1979. His position involved being a first aid attendant, doing trail layout and working with the construction of the lift system, but by autumn, Ken was hired on as the director of ski patrol and tasked with coming up with an operations plan, a ski patrol team and an avalanche control plan for the mountain.

Ken’s dream crew was versatile; hard working and skilled in first aid, avalanche control, and search and rescue. With a vision to exceed the standards of other ski hills at the time, Ken joined forces with an old ski buddy, Dr. Don Warner, to start the doctors program. On-mountain patients could now receive drugs prior to being evacuated off the mountain, with Advanced Life Support doctors flying alongside their patients once heli evacuations became available. The program set a new standard for patient care in a pre-hospital setting, and for Blackcomb, it was the foundation for providing the best medical care in the world to its injured guests — a standard that still exists today. Meanwhile, Peter Xhignesse (Ziggy) had stepped up to become the avalanche forecaster, allowing Newt to concentrate on other operational issues.

In 1984, Blackcomb put a then-controversial T-bar up the south side of the mountain (now known as 7th Heaven) and officially became the Mile High Mountain, boasting the longest vertical drop in North America. Ken was also courting controversy with management by encouraging patrol members to complete their initial paramedic training. He also developed a volunteer program that led to a flow of paramedics from Vancouver joining the volunteer patrol, which in turn improved relations with local Emergency Health Services and paramedics began to do all the medevacs.

But most importantly, my chance to join Patrol had finally arrived. I was invited to join the team and, much to my surprise, would become an avalanche forecaster less than four years later, tasked with the responsibility of expanding the program into the Blackcomb Glacier.

In 1987, Intrawest purchased Blackcomb Mountain and the ensuing terrain expansion, new facilities and high-speed quad chairlifts positioned it as serious competition for Whistler Mountain. What started as a friendly rivalry morphed into all-out competition between the two mountains, as Whistler began to grow on the world’s stage. Ken continued fighting for more patrollers and better wages, but eventually clashed with management over ideas around long-line helicopter rescues, and by 1998 he had left the Blackcomb team to work with Intrawest. About that same time, Ziggy succumbed to his battle with cancer and the run Ziggy’s Meadow was named in his memory.

I continued working on the expansion plans to develop an avalanche control plan for Blackcomb Glacier Provincial Park. This new terrain would make Blackcomb Mountain’s avalanche program one of the largest in North America. The learning curve was steep and the team responded in kind, working hard to keep opening terrain as soon as possible — a highlight of my career to be sure

With the establishment of a helicopter base at the bottom of Blackcomb, corporate helicopters were readily available. Ken’s vision of a long-line rescue program was established, helicopter bombing was encouraged, and the medevac program grew. Ski patrol wages increased while the team grew larger and training improved, helping patrol deal with the ever increasing number of guests on Blackcomb. Whether patrol needed a new computer, new weather sensing equipment, or rescue equipment, it all seemed effortless to procure as everyone was working to find ways to get guests to ski powder on Blackcomb before Whistler. Looking back, I took pride in trying to accomplish the task.

The rest, as they say, is history — Intrawest purchased Whistler in 1997 and the rivalry between the two patrols continued for a few more years. Eventually cross-pollination brought the group closer together with patrollers doing exchanges and some even switching mountains. Blackcomb sent one of our longtime ALS paramedics to the Whistler side, which instilled a more homogeneous approach to dealing with injuries. We had truly become the Whistler Blackcomb Ski Patrol.

Ultimately, Ken Newington had a huge impact on pre-hospital medical care in the ski patrol setting. He raised the bar for the industry and all large resorts in North America presently using a similar model. During those early years on Blackcomb Patrol, I remember an amazing, hard-working team that worked tirelessly to achieve what it had to accomplish, sometimes pushing beyond its comfort levels. This set the stage for a highly progressive and committed culture within the Blackcomb Ski Patrol that still thrives today. Of the original patrol team, only one hire remains — Ken Pope. At the age of 69, he is still a dedicated, hard-working ski patroller with the strong work ethic that Blackcomb Ski Patrol was founded upon.

I would like to dedicate this article to some of my fallen colleagues who passed away while on or retired from the team. In memory of Miguel Geraco, Peter Xhignesse, Wendy Thompson, Andy Goedicki, Mike Hoth, Suzanne Kaye, Karen Kogler, Tom Fanta, Bill Koersen, Dave West, Doug Bebb, Sean Crickmer and Gil Dyck.

For more Whistler Blackcomb history, watch the full movie 50 Years of Going Beyond