High in the treacherous peaks above Widgeon Lake, a 1950s plane crash site draws three friends into the trek of their lives. 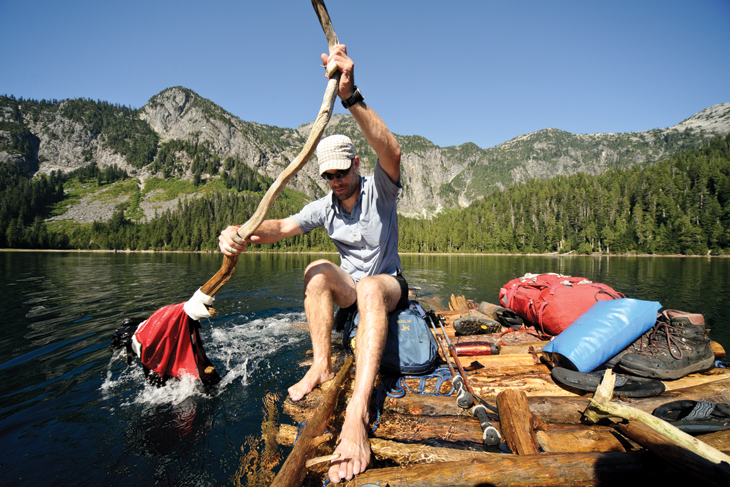 THE SUMMIT
A front wheel jutted skyward, more or less intact, but the fuselage had caved in on itself and was still partially buried under snow. A piece of wing lay off to the side scattered amongst twisted debris and unrecognizable objects. There was no sign of the gold but we’d reached our goal – the plane wreck on the summit. Usually peak-bagging comes with high-fives and jubilant hollers but this wasn’t a trophy summit. People had died here.

THE CRASH
In January 1953 a Canadian Air Force Mitchell B-25 bomber reportedly flying $1.6 million in cash and recovered Nazi gold was suddenly enveloped in an ice storm and careened straight into the rocky peaks above Widgeon Lake at 300 kilometres an hour. No one survived. It took search and rescue teams several months to locate the crash and fight their way in through snow. Bodies were recovered but there’s never been an official tally of the valuable cargo. Much was recovered, but no one knows how much was not.

THE CURSE
“It should be right around here.”

Francois-Xavier de Ruydts (aka, “Fix”) circled a vague area on the map. I was unconvinced – millimetres on a map meant miles in the wild. Plus, I’d just met Fix two weeks previous and his plan – to bushwhack five days into the site of an old plane crash with valuable cargo – sounded tough, and route information was scant. Yet as I thought about it over the next few weeks, the lure of the high alpine “treasure” changed my mind but first I wanted to talk with someone who’d actually been there.

In 1982, Mike Boileau became the first civilian unattached to the crash to find the B-25 site. His first words to me were: “You know that place is cursed?”

A self-proclaimed “hobby explorer”, Mike recounted tales of a vaguely reported event where members of a military search and rescue team sent to investigate the site were later killed in an air crash of their own. He told of two prospectors named Henry and Ed who’d contacted him looking for data in hopes of staking claims near the crash site. A few months later Ed drowned while trying to retrieve his floatplane, blown into the middle of Pitt Lake by a gust of wind. Not long after, Henry crashed his own plane in the Yukon and died from injuries while awaiting help. 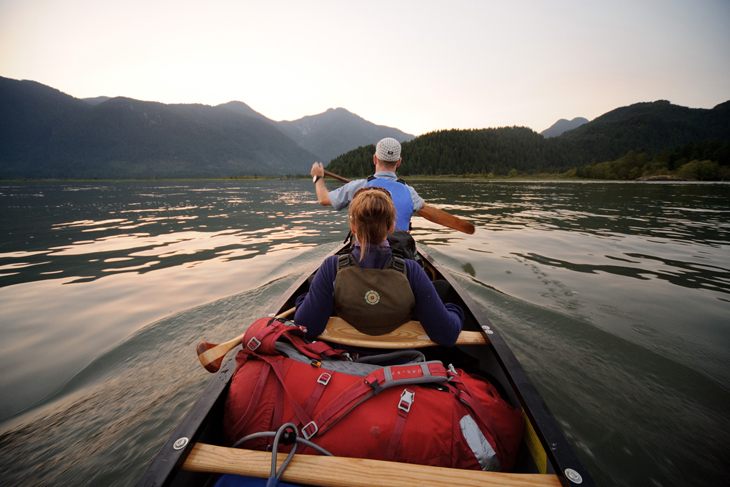 Mike seemed to know his stuff. “Which route you taking?” he asked.

I relayed Fix’s plan as best I could remember. Mike snorted, “You’ll never find it that way. Here’s what you gotta do: start at the…” I zoned out, delegating Fix for a follow-up call, and then asked my only real question for Mike: Had he ever found the legendary Nazi gold?

“I wouldn’t tell you either way,” Mike said. “But make sure you guys bring your guns.”

THE QUEST
Day 1: Shawn Campbell, a mutual friend who said we had him at “treasure hunt” joined Fix and me for the adventure. With three in the canoe the paddle up Pitt Lake took about two hours and we joked about which of us wouldn’t be coming back. Mike Boileau’s tales of a curse was like seeing a large spider crawl under the couch – you knew it was there but didn’t want to go looking for it. That night we camped on the lakeshore and stayed up until the only light around came from the tip of Shawn’s clove cigarette. No one wanted to openly mention The Curse for fear of giving it wings.

Day 2: Mike Boileau’s surefire route was anything but. After nearly two hours of being utterly lost, bushwhacking and debating the merits of GPS, we finally found our first waypoint – a bridge leading to a decommissioned logging road. Six kilometres of bitch-slapping branches and coiled-like-elastic snags were punctuated only with cursewords and the smell of dank bear wafting from moss-covered caves. I hurried along to keep close to the guys in case a paw darted out and found its grip on my boot. 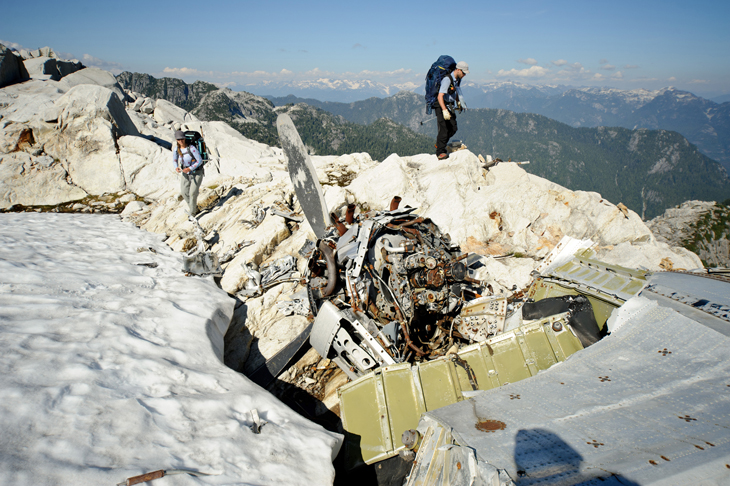 Eventually we came to our second waypoint, a steep, dried-up waterfall drainage that led to much-unanticipated rock climbing. Although free-climbing lower-fifth-class rock with a heavy pack was a tad uncomfy it was The Curse slow-dancing through my mind alongside visions of bloody, cracked-open heads that caused the most stress. I began to doubt our route. How the fuck were we supposed to get back down?

Camp that night was a large, flat ledge of rock with a killer view. Of the ten kilometres we’d hiked that day, six had been bushwhacking. Sleep came easy and dreamless.

Day three demanded much tolerance and true grit. In place of rock we faced a vertical tree-wall: the steepest, thickest bushwhacking encoun­tered yet. Skyward evergreens and waist-high underbrush were stacked one upon the other. Well past the point where it’s easier to push on than turn back we soldiered on in silence, retreating into ourselves.

Even if we found a pile of freshly polished gold we’d already decided to leave it all there. No one wanted to test whether greed prompted The Curse. At some point, we crested the summit ridge and caught that first glint of sunlight on twisted metal. 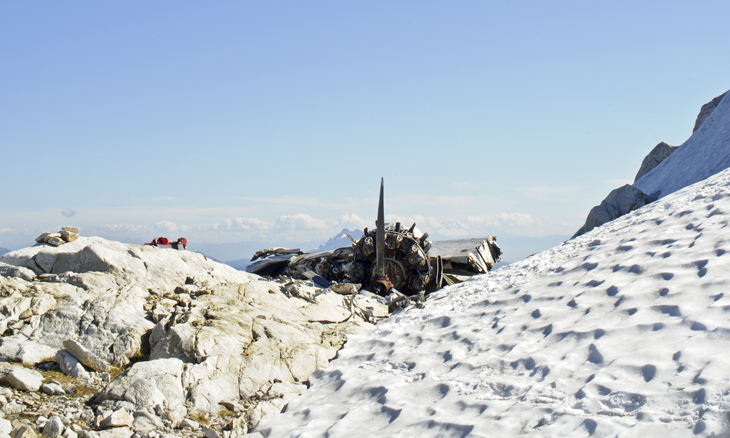 X MARKS THE SPOT
On this blue-sky day it was hard to grasp what happened to bring this plane down 60 years ago – the sound of engines screaming before metal hit rock was palpable in my imagination. We stood in a moment of silence and thought of those onboard, hoping their families had found at least some peace knowing the resting place was of such perfect beauty. I stayed awake most of that night watching the sky drop occasional fire­balls towards earth.

Morning arrived and the only gold in sight was the welcome sun and we didn’t feel particularly “Cursed.” We didn’t trust Mike’s route, so we opted for Fix’s original plan for the descent. The going was steep and slippery but easy – painfully easy. In just under three hours we’d descended what had taken us most of two days to ascend up the other side of the ridge. A few more frustrating kilometres of ego-slapping

“The gold may never be found but the mere idea it still exists continues to feed the fantasies of adventure lovers.” – Kenneth Welsh, host of TV’s Northern Mysteries.

bushwhacking and we hit the shoreline of Widgeon Lake, finally allowing ourselves the cheers and high-fives of success. Our canoe was across the lake, however, and the shoreline was impassably steep. We’d done nothing the easy way on this trip and weren’t about to start. Fix broke out a foldable saw and we collected deadfall to begin building a raft. 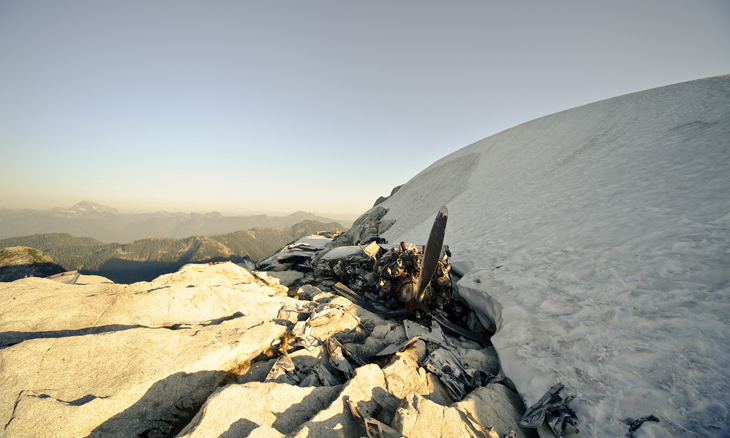 The first dip of our paddles – y-shaped branches and canvas food bags held in place with hockey tape – elicited chuckles and wavering confi­dence. The raft was sewn together with every inch of cord we could find: rope, shoelaces, backpack straps… six hours and 25 logs had gone into it. We were a barely floating gongshow but we were moving, inching foot by soaking foot further from The Curse. The last leg of any adventure always brings that bit of introspection, that denouement. We hadn’t found the gold we didn’t want and had certainly suffered much more than we’d enjoyed. And yet with each stroke of the “paddle” we felt more alive and rich, not from missing gold or the fame of finding it but from the experi­ence of being lost in the bush, in ourselves, and in a history few people had ever glimpsed. We had cursed Mike Boileau’s name and questioned his route almost the entire way but here, at the end, I wanted to thank him – we’d planted footsteps in a rare place.