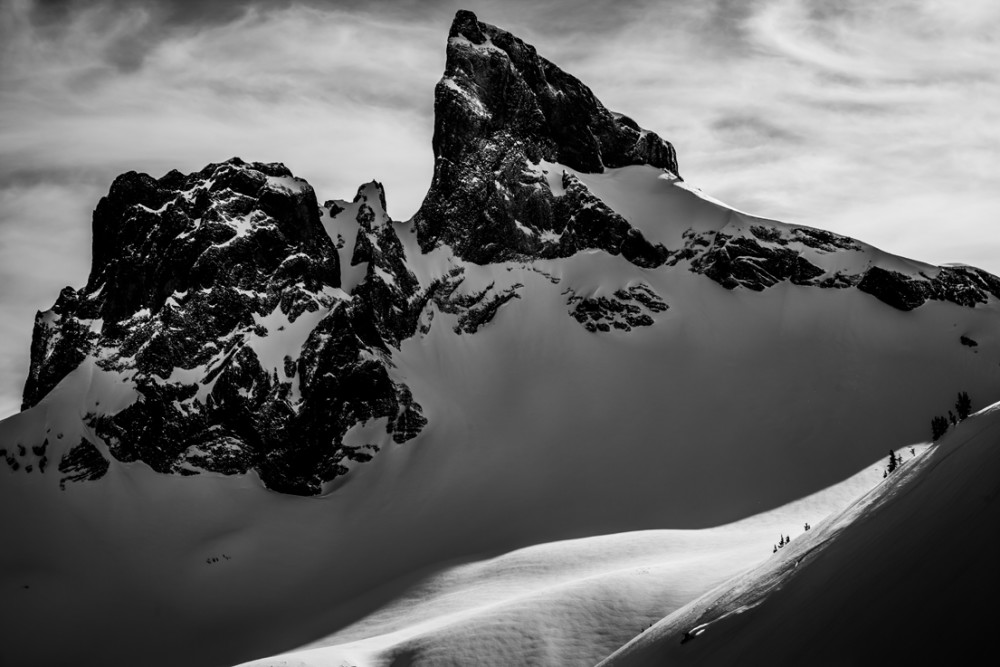 Not every man will admit to breaking down in tears, let alone actually do it in front of his buddies. After ten hours of towing a 50-pound sled through knee-deep powder, Whistler photographer Sean St. Denis was that guy.

Quit… so not worth the time and energy…. Give up… With shaking legs and burning hip flexors St. Denis sank into the snow and sobbed.… Pussy.

It had been a brilliant idea: a self-propelled mission to Black Tusk. The landscape surrounding the 2,319-metre stratovolcano undulates in ridges and rolls, a crumbly reminder of the fiery will that once slept beneath the snow. Sled skiers will venture out periodically, but the local ski touring crowd usually opts to bag shorter and more accessible peaks up the Duffey Lake Road or along the Spearhead Traverse. Lone and remote, Black Tusk seemed the perfect way to escape the crowds.

Despite the 15 km tour in, it was easy for St. Denis to sell the idea to local splitboarders Chad Boulanger and Ben Poulton. After a half-season of hitting it hard and checking off some big descents in the usual (busy) spots, they were keen, fit and ready for some real backcountry solitude.

But lugging forty pounds of camera gear on his back didn’t appeal to St. Denis so he suggested they tow their gear in plastic sleds. That none of them actually owned said sleds was not a problem. Using several metres of PVC pipe, some climbing rope, harnesses and hardware-store plastic toboggans, they fashioned harness/sled systems for all. Voila! Their mamas didn’t raise fools.

Or so they thought. 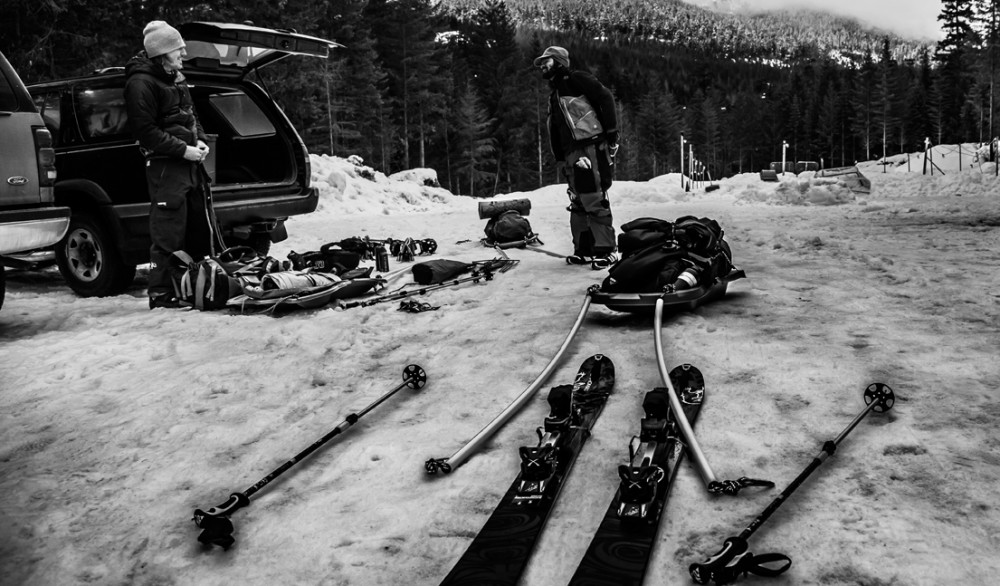 “Wieners and cheese? And chili? That’s it?” St. Denis swore out loud as the expedition mates converged the next morning. “That’s going to feed three guys for three days?”

Boulanger grinned sheepishly. He’d made high-caloric bars and grinded coffee beans for extra “go” but in his enthusiasm, had forgotten them. He held up two ziplocked bags of chili and looked optimistic, “Lean and light.” Then he stepped into his splitboard bindings, took one step forward and immediately fell over. 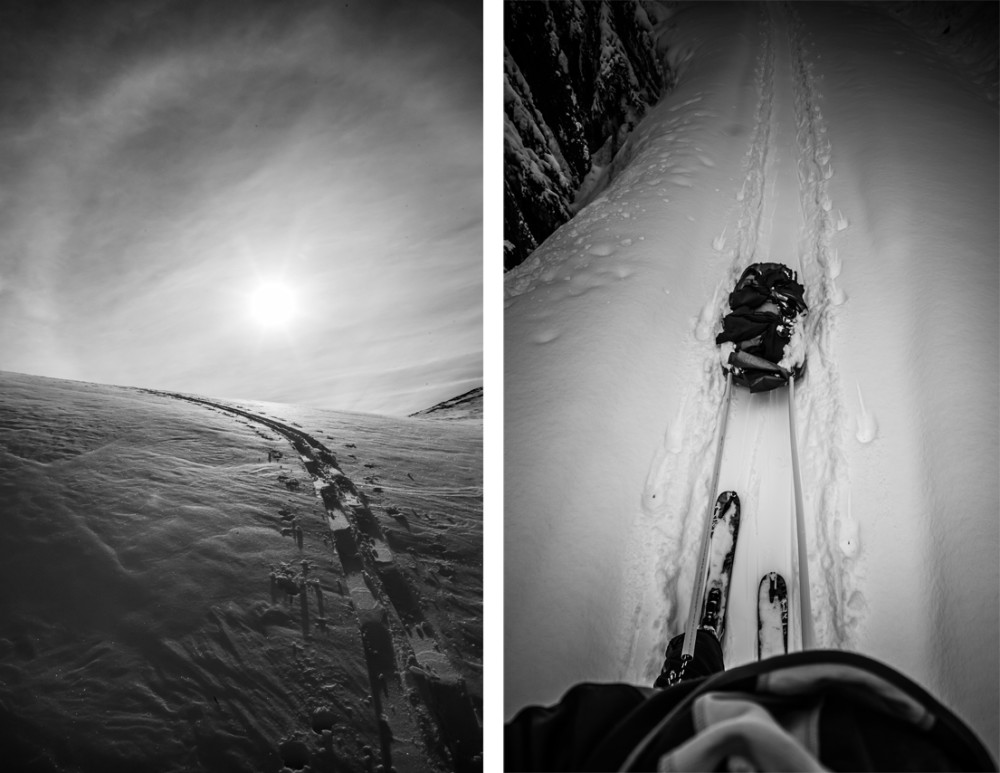 The sleds were loaded with heavy gear on the bottom and light stuff on top just like a backpack, but the stiff PVC pipes threw off the splitboarders’ glide steps. After a bit of practice though, all three men were made good time up the hard-packed snow to the gated Forest Service Road. Soft, deep snow from that point onwards however meant slow, arduous trail-breaking compounded by awkward sleds and stiff PVC pipes.

“Whose crazy idea was this?” Boulanger questions after four slow hours through snow that seemed to get deeper with every step. St. Denis shrugged but refused to complain. His hips were screaming from the weight, but it had been his idea after all – an iconic trip! He wasn’t going to be the one to wuss out. “Here, have some cheese and a wiener.”

Hours slogged past. All three confessed that dragging the sleds was agonizing so they raised the harnesses to their chests. Around them the wide meadows had begun to close in, the terrain becoming steadily steeper. With each step, snow piled into their sleds, and doubt began to gnaw at St. Denis as his aching back, arms, legs, shins and even feet begged for mercy. The trees began to seem endless, the cotton-covered sky stretching to eternity. This was never going to end – the up, the burn, the pain. It was never going to stop.

And it didn’t. Boulanger pushed onward with joy, for him things only got real once his comfort zone was gone. St. Denis fell further behind though, feeling like an oxen pulling a load but instead of a farmer cracking the whip it was going to be the will of the mind pushing him forward… Or not. Give up… Come on. You’re not even close… 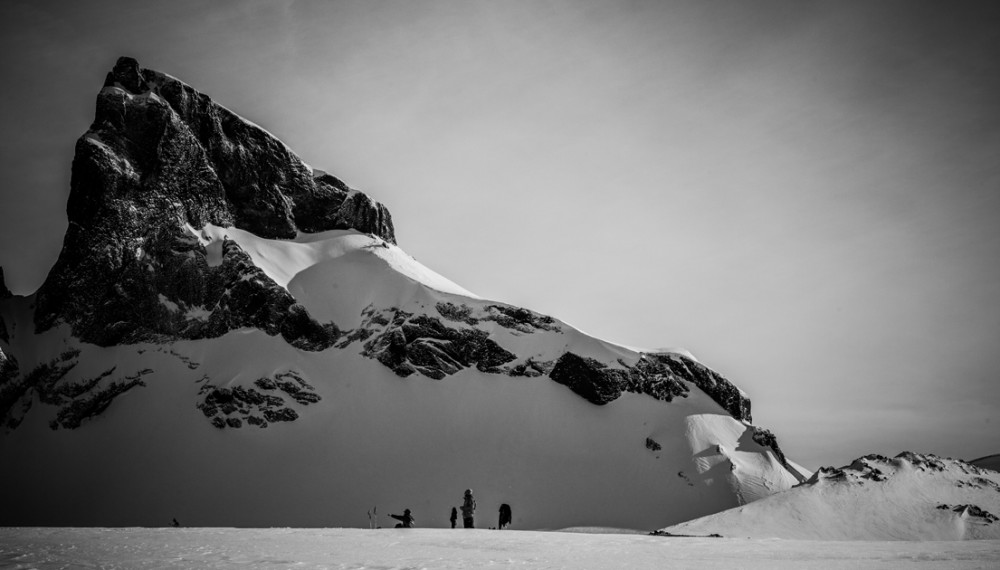 With each step, St. Denis’ legs quivered and his body ached. You’re not going to make it. Frost ringed the hood of his jacket. Don’t be an idiot, you can’t make it. It’s time to go home. He took yet another step.

Quit… so not worth the time and energy. 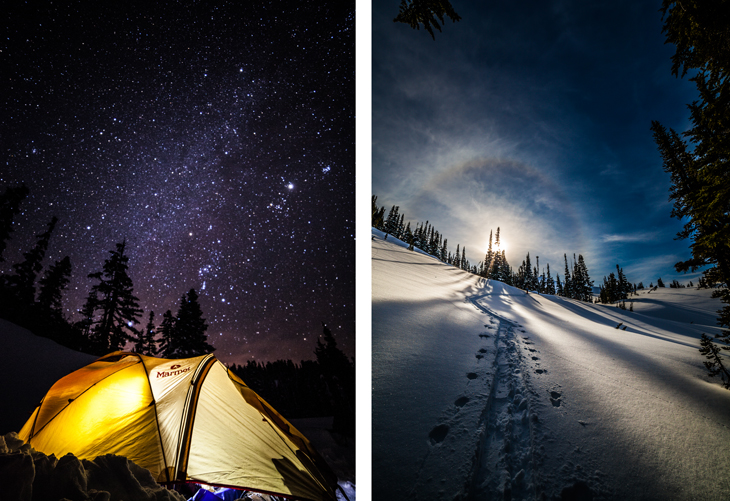 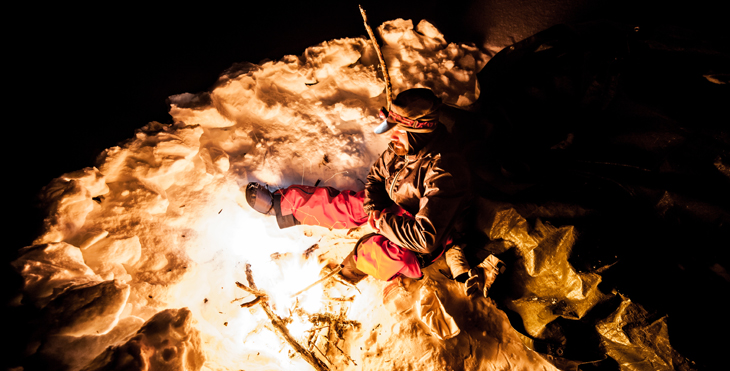 He collapsed. “Just leave me. Everything hurts, even my armpits.”

“We’re not leaving you,” Boulanger said. It had only taken him a few seconds to backtrack to St. Denis. “We’re almost there. Dig deep, Sean. Dig, and move.”

St. Denis suppressed the sob that threatened to break him. He pushed himself up with his ski pole and stepped forward. One more step. His ski slid a foot forward. Just one more…

“I see Black Tusk!” Poulton whooped from ahead. Without warning the trees fell away and the iconic black spire jutted above the sea of white ahead. St. Denis dropped his poles and sank back into the snow. 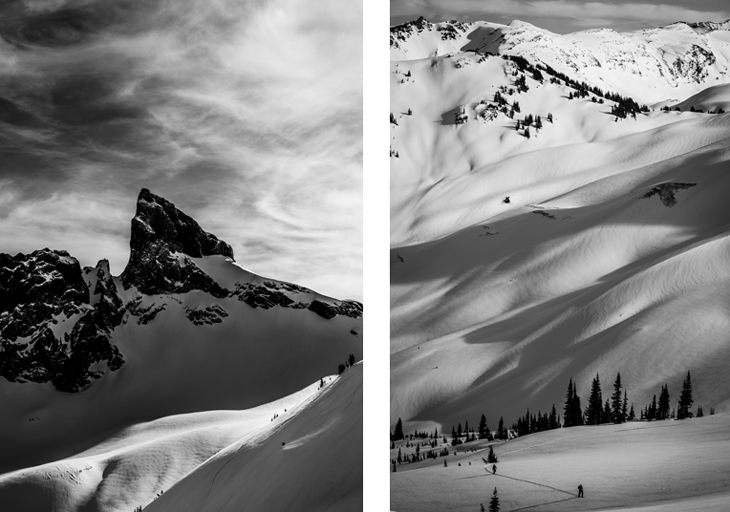 “Technically, we’re not quite there,” Boulanger pointed out, looking hungrily at the base of the Tusk proper looming a few hundred metres ahead.

St. Denis shook his head. He was cold, sore, and hungry and camping right where he lay. In a few minutes he was going to crawl into a tent, probably with everything still on him. He’d sleep restlessly because of the frigid temperatures, but tomorrow, tomorrow they would wake with bodies stiff and sore, and minds inspired by black towering peak and surrounding ridges of silence.

And they would ski. There would be no talk of pain or suffering, no feelings of regret. Only glory from the sweet sprays of pow hitting their faces and Black Tusk watching over them. And it would only be them: no chairlifts, no crowds. They’d carve waves into an endless sea of white, leave lines only the sky and the birds would see.

As they unpacked their jerry-rigged toboggans, pitched tents and sipped hot tea, the sun began dipping towards night, the sky shifting to electric pink and purple. Tomorrow they would ski. And their hearts would be free.