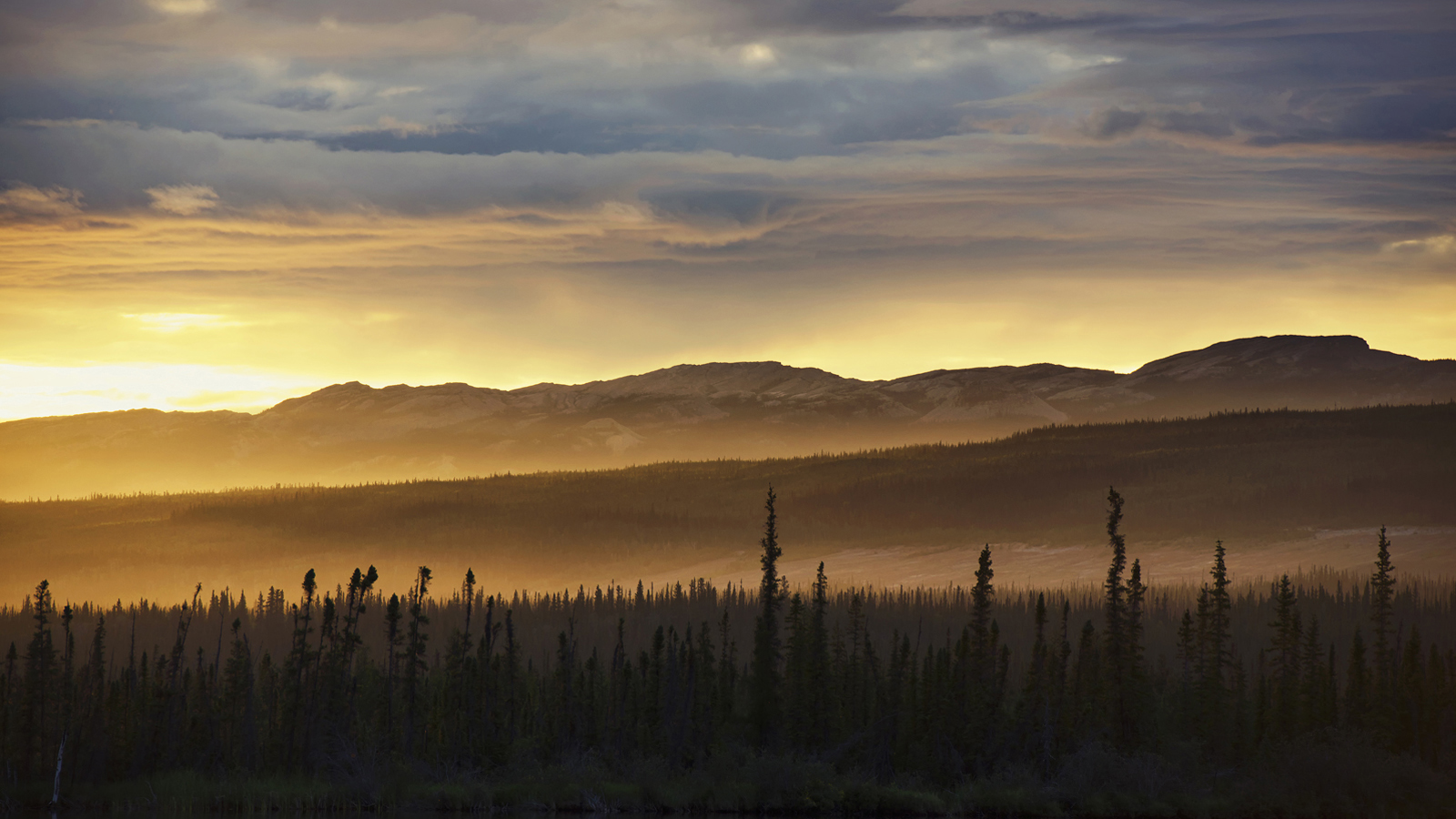 Requiem For a Future North

For several years I have made regular trips to Canada’s north, spending months at a time above the 60th parallel—the invisible border where the land changes from boreal forest to barren tundra. Professionally and personally, my immersion in the north of my own country has profoundly influenced choices I’ve made in ways that living other places has not: I loved Africa’s wild and unpredictable spaces; I admired Europe’s efficiency and unique social intelligence; but no other geographic experience has meant as much to me as the staggering privilege of accessing unlimited and untamed backcountry.

What happens to me when I’m there has caused me to look at our northern wilderness in a more philosophical and meaningful way. Canada’s north is one of the few destinations where we can re-immerse ourselves in a wilderness virtually devoid of scars left by humans and be left to discover, explore, and restore our once natural selves.

As we move from an age of abundance to one of scarcity, increasing pressure is placed on northern communities, their resources and traditions. The North represents the vast abundance that this country is famous for—trees, minerals, wildlife, clean water—an abundance that fueled our almost unconscious economic development as a nation and shaped the way that we value and define ourselves. To Canadians, the north has always been our normal.

But normal is changing quickly. For previous generations, normal was a vast wilderness, unknown and boundless, punctuated by occasional frenzied migrations. In my generation, normal shifted. It became a set of precious and suddenly finite commodities, as money and people flooded the backcountry. Now it’s normal to encounter vast clear-cuts just beyond the treed edge of highways. We hike and bike alongside busy thoroughfares; make use of so-called urban wilderness; go fishing and catch nothing. In the span of my lifetime, the out-of-sight-out-of-mind strategy has normalized a disturbed landscape and alienated us from our own impacts and interaction with it. Consequently, the formerly idealized narrative around our birthright wilderness experience has changed. The ‘normal’ that my father immigrated to this country to discover and understand—stories of which fascinated me as a child—is no longer.

Yet in spite of all this, in the north, true wilderness still exists. Last year, I started out in Yellowknife. Record numbers and acreage of forest fires burned throughout the Northwest Territories, turning the sun into a red ball on the horizon. The city was engulfed in a post-apocalyptic yellow haze and the air smelled like a massive incinerator. Around the outskirts, major highways were closing and lodges and communities were being abandoned. A city was being held hostage by nature. In itself, such blatant evidence of climate change affecting urban centres isn’t news—witness the 2013 floods in Toronto and Calgary. Yet in the north, the full brunt of nature’s force is constant, an undercurrent against which human agency remains puny.

Flying over the Mackenzie River in a small plane to reach the remote community of Norman Wells, my staging area for six weeks, the waterway dominated the landscape. Looking innocuous and sluggish from above, in reality it’s deceptively lethal. Often referred to as a “cold Amazon,” these yellowish braids of powerful, fiercely cold water took the life of a young man on my fi rst night there, reminding me how precarious life is and how quickly things can change in a place that does not give second chances.

Such brutish austerity is exactly what compels many to journey here. For Canadians, visiting the north is also about connecting with our collective heritage and turning back the clock. In a visceral, experiential way we remind ourselves of the hardships that indigenous and early European pioneers faced on a daily basis. Making important choices based on weather and imminent risk is a requirement of travelling through this landscape. Few who spend time in this part of the world fail to feel how much sharper the razor’s edge is between survival and peril. In a landscape this remote and unforgiving, we are inevitably forced to question assurances around the modern conveniences we take for granted: food, shelter, transport. We are also reminded of a more fraught and historic definition of normal—one with little hope of intervention, but the great promise of exploration.

Paddling the Horton River north to Franklin Bay on the Arctic Ocean was the first leg of my expedition. Aside from the humans I paddled with, I didn’t see another for over two weeks. Not surprising on an Arctic River. In fact, as one of only two or three groups on the river in the summer of 2014, no more than 30 people would see that landscape. Odds were that any time I stepped from my boat and went for a hike I was the first to set foot on that particular bit of terrain. A remarkable thing in this day and age; something one might expect of an unexplored ocean floor, not a terrestrial landscape in a developed country.

As the northern territories remain sparsely settled, many potential and active industrial developments proceed virtually free of public scrutiny. Remoteness, which for centuries offered a degree of protection, is now a key factor in an emerging pattern of rapid development. The Scotland-sized Peel River watershed, currently undeveloped and home to abundant wildlife and some of Canada’s most iconic paddling rivers, also harbours upwards of 8,000 individual mineral claims—including the Yukon’s largest coal deposit in the basin of the Bonnet Plume River, and an almost fabled iron strike along the Snake River. If any significant mineral deposit is mined, it could start a cascade of development. Currently there exists very little regulatory structure to prevent this from happening. Canadians should acknowledge that the debate around defining responsible future utilization of this wilderness is elevating in urgency.

We should be asking important questions about what we want our new normal to become.

For many Northerners, hunting wild game is a way of life and has been for over ten thousand years. By hunting and harvesting caribou, moose, or Dall sheep, indigenous groups retain tradition and culture that can also cut a family’s grocery bill in half. These days, pressure on game populations is amplified by trophy hunters from around the world who pay huge tag fees for the chance to mount antlers on their walls, a welcome source of local income. Coincidentally, the large racks hunters seek tend to belong to the eldest males in a herd—animals typically past reproductive prime and nearing the end of their lives; many will starve over the course of a long winter.

With their own longevity in mind, outfitters are now focusing clients on those particular animals to give them what they came for, effectively culling their managed herds. By doing so they have created a model for long-term species conservation that appears to be working; game populations are allegedly stable in the hunting concessions I visited (although not in all parts of NWT). Individuals or families manage 99-year renewable leases of prime hunting territory each the size of a small country, striking a tenuous balance between profitability and stewardship. Increasingly, efforts are made to harvest nearly all parts of an animal, feeding staff and guests at game lodges and sharing parts of the kill(s) with nearby communities.

The so-called Barren Lands are, in fact, an Arctic Serengeti—a wildlife refuge of global significance. In a southerly creek near Drum Lake in the Mackenzie Mountains, Arctic grayling, numbering into the hundreds, turned the water into a liquid swirl of blue and silver. I walked amidst the flow just to feel the brush of fish against my legs, a solid embodiment of water-borne determination. The abundance of wildlife we encountered—moose, caribou, wolves, grizzly, musk ox—was surpassed only by what we missed by a matter of days: tens of thousands of caribou on their annual migration through the Horton watershed.

In contrast to the solid abundance that moves over it, the permafrost landscape often crumbles underfoot. I was amazed by the limestone and colourful, sulfur-rich lignite deposits in the upper reaches of the Western Arctic, so friable that they can’t support extended use by large groups. Game trails, usually barely visible on the tundra, form pronounced troughs through this fragile landscape.

With its delicate balance between cruelty and wonder, the integrity and wildness of the North, one of the last frontiers on the planet, is part of our DNA as Canadians. We have the opportunity to author an outcome that works for our best long-term interests. Faced with increased pressure from mining and resource development, this vulnerable, powerful, raw landscape has boundless potential for remote hiking, backcountry camping, mountaineering and wildlife viewing. Can we strike a balance between extraction, recreation and conservation? Can a nickel mine comfortably co-exist with a world-class wilderness canoe route?

My hope is that normal in the North doesn’t change too much or too quickly. Moreover, that a multi-generational perspective is applied to the important decisions about how we view and develop an emerging vision of the region. Very few places in the world have this same opportunity. The North is one of the greatest and emptiest canvases on the planet. As Canadians, the opportunity to be good stewards still exists. It is up to us to consciously define what that looks like. The time for making those important decisions is upon us.

This feature is from the 2015 Mountain Life Annual, available by print subscription and through digital download here.