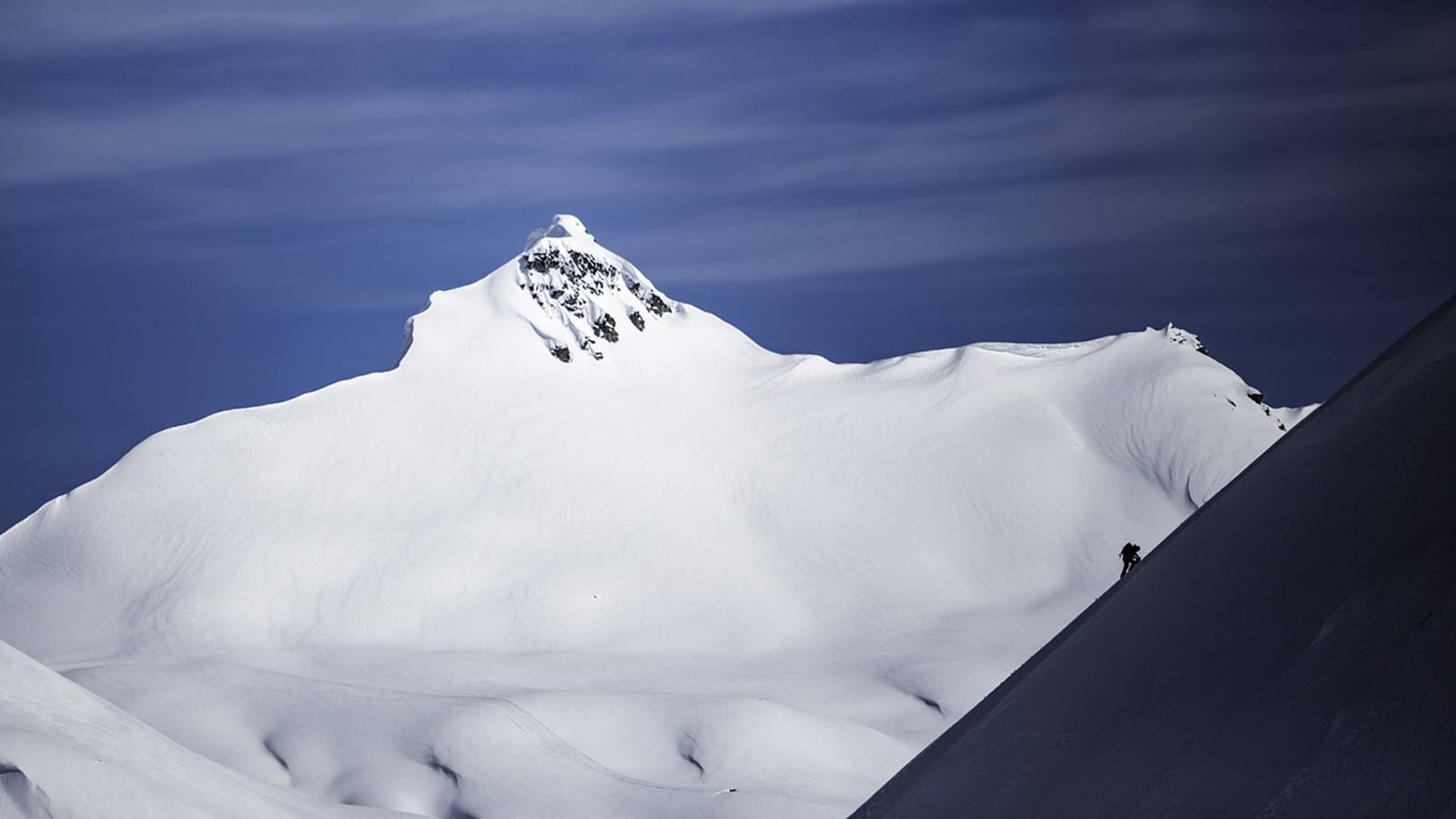 Alaska. It’s our first time to the Holy Land of big mountain riding — fellow rider Claudia Avon, photographer Erin Hogue, myself, and our filmer Bruce Johnson. Talon Gilis had already been in AK for a month, so he joined our crew to become a guide, photographer, fellow rider and explorer. We later find out he’s been holding in a herniated stomach muscle with a wooden block and tensor bandage– Alaska is not for the not-tough. We came to snowboard and capture it all on film for our passion project, but instead we are currently attending to our most recent of many near death avoidances — smoke inhalation.

The hazards of Alaska began long before we ever touched snow. We had already narrowly missed redecorating the truck with a moose through the windshield on the 2,358-kilometre road trek from Whistler to Haines. We’d also failed to bring the back-up supply of diesel necessary for the long stretches of Alaskan highway that have no gas stations. Then there was the time we lost an entire hub and tire from the trailer, and the other time when we lost each other one night in Haines because rich Californians kept ringing the “free drink” bell.

Shit happens when you travel, we aren’t novice to that fact. But after an entire season of hustling for snow, to journey to the promised land only to end up tent-bound for 96 hours straight as smoke and blizzard battle for dominance of our living space… we are all starting to feel defeated. Struggling to MacGuyver the chimney repairs with duct tape and a shovel blade whilst battling Mother Nature’s arctic gusts of laughter stretches our patience thinner than a fruit roll-up. My yogic mindset and practice on how to be present, dismiss expectations and surrender to the outcome begin to drift away with the fleeting smoke. A warm welcome to The Last Frontier, with a bitter spoonful of medicine.

But we fix the chimney and as the storms rage on we do what we can to suffocate impatience and even find a semblance of contentment somewhere, (maybe next to the half-eaten raw chicken a fox has left for us). Confined, we turn to strumming the guitar, reading about fear, and watching Entourage marathons or Jeremy Jones movies on repeat thanks to the truck converter. We take blizzard walks with neighbouring aliens, (they could have been there) perform small-space yoga, chug boxed red wine, and lay down countless massacres of two-dollar bags of potato chips. And then the next thing we know, someone pokes their head out to azure skies and a blanket of frozen happiness on everything below it. Never have I ever been so excited to pee outdoors in minus 20 degrees. Go time.

Step one: Finally get moving. We fumble with tent-cramped legs and foggy brains to gather our gear. It’s like the first day of the season: layers, beacons, radios, GoPros, water, food, crevasse rescue gear, extra fuel, waterproof matches, sleds loaded up, gas and oil full, gloves. Today we might go snowboarding! The rumble of 800cc Ski-Doo engines helps build the morning stoke and we charge off towards dramatic snow covered peaks that stand powerful and cold-smoked, every bit as alluring and mythical as Narnia or Middle Earth.

Step two: Don’t die getting to the snowboard zones. High alpine snowmobiling in a metre-plus of fresh snow anywhere is challenging, but in Alaska, it’s like driving a scooter naked in a tropical storm, in a third world country with a hundred pound bag on your back. There are no rules, it’s hard work, you’re vulnerable, and there are a lot of things to avoid running into.

Sledding in AK is like a series of skill testing questions with very definite wrong answers at every turn. We break trail into zones we know next to nothing about and tiptoe as carefully as a 500-pound machine possibly can amidst a crevasse field. We ride alongside wolverine tracks and side-hill around holes where the smallest slip-up could leave us buried deep below with the woolly mammoths.

Pushing closer to the slopes of our contentment we can’t help but share some celebratory girl-power snowmobile moments on this part of the expedition — verbal reminiscence of those few who were patient enough to go against the grain and teach us how to sled over the past four years. Silent thank- yous to those who taught us through impatience and the tough love method of “keep up or be left behind.” We all have tales of being left behind on our own for hours to catch up, flipping sleds solo, digging out of trenches, and the general overwhelming discouragement of failure. But here in Alaska we make it safely, thanks to friends who rode with us in the past, just as we are hopefully laying a little pave-way for more ladies to come in the future.

The deeper we venture, the more present we get. Maybe it’s the dopamine release from sledding or the earn-and-burn of each step as we hike to the top of our lines, soggy and alone like the last Cheerio in a jumbo bowl of milk. Crests of jagged rock own the highest points of the horizon, steep faces veiled perfectly in layered creamy frozen icing, and cedar-coloured groups of spires jutting out like guards at Buckingham Palace while casting shadows on the bright blue ice fields below. Where is the spaceship to take us back to earth? Standing on the side of those mountains is unlike anything we have ever seen, an energy none of us had ever felt — in a few moments Alaska resurrects our spirits, undoing all that had crushed them mere days before.

Snowboarding had brought us to the Land of the Midnight Sun, and yet we actually did very little of it. We logged two to four laps of actual planche à neige per day in roughly six days out of 30. The math did not meet our primary expectations, but isn’t that where we so often discover the hidden values of life? Those secrets and surprises that lie just beyond the fringe of what we go looking for?

The only constant in life is impermanence. And Ullr, Mother Nature, The Pineapple or whomever we blame/worship/rely on for weather is definitely not concerned with our needs. What choice do we have then, but to enjoy the chaos of travel gone awry, to drop all intentions to control the outcome and go with the flow of how it all unfolds? Alaska taught me to be present in the vulnerability of nature as we fill our yearning cells with the feel-good fear of extreme sport and warmth of companions willing to suffer, shout, and revel with us along the way. We spent a month out in the frozen Last Frontier to learn that all the ingredients that create those ‘aha’ moments of happiness actually exist within. (Just be sure to properly shelter your tent chimney against the howling winds of adversity.)