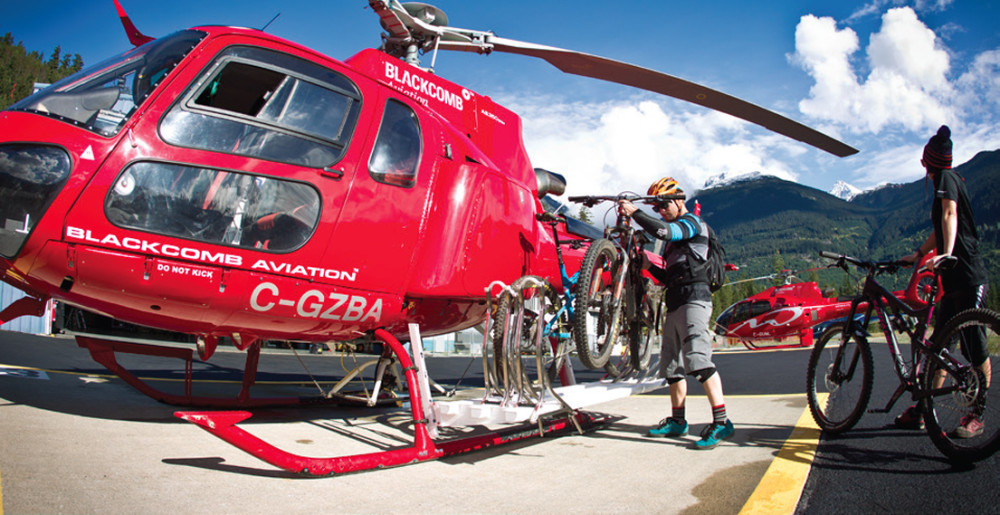 It’s a memory you carry with you the rest of your life: a helicopter floats above a remote mountain before setting down, you hop out as the rotors roar above you, a strong blast of wind pummels down as the heli lifts off and then, silence, as you take in alpine peaks as far as the eye can see.

But this isn’t your typical heli trip. This time, the snow is replaced with dirt, the Gore-Tex swapped for shin guards and your weapon of choice is two wheels instead of a waxed base. Welcome to heli-biking in British Columbia.

It’s no secret Whistler and the Sea to Sky corridor have become world-renowned mountain bike destinations. The Whistler Bike Park alone attracts riders from around the world, while the hundreds of kilometers of easily accessed singletrack in the area will satiate even the most die-hard pedal pusher. But, if you’re looking for even more adventure, helicopter accessed mountain biking in the high alpine of B.C.’s Coast Mountains should be on your bucket list. 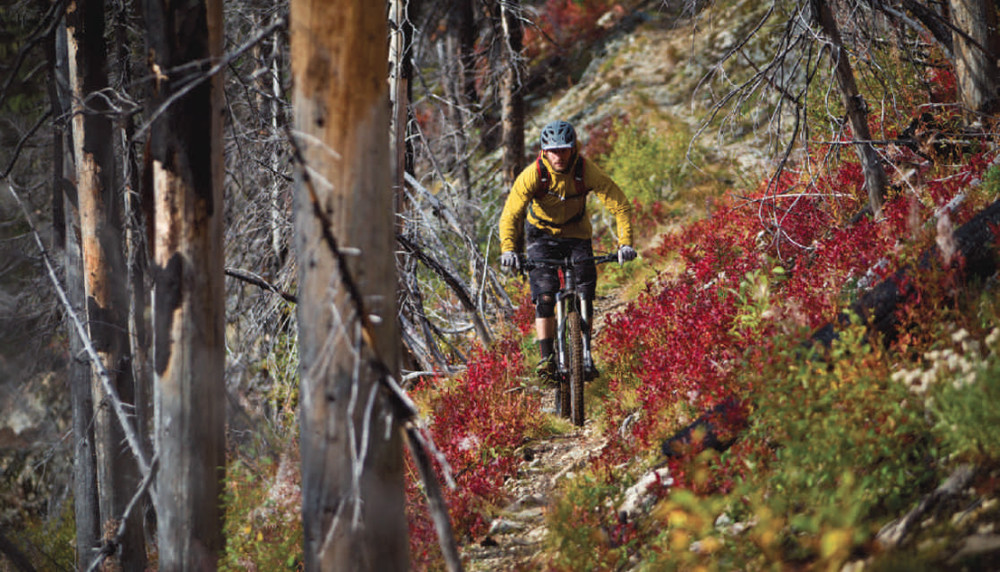 One of the more popular drops in the region is on Mount Barbour, northwest of the village of Pemberton. Until recently a rider’s only option to travel up into this alpine zone was by two feet and a heartbeat. And while it may have been fun to rip down Barbour’s open slopes, it wasn’t an environmentally sustainable practice. It began to draw the attention of local wildlife groups and the B.C. government.

Blackcomb Aviation has been offering unguided heli drops to Barbour for the last few years and Andy Meeker, Blackcomb Aviation’s Pemberton Base Manager, has witnessed the environmental impact first hand. “The signs really started to show up last year,” he says. “With degradation of the soil where erosion was starting to set-in. It seemed quite clear that we needed to take a different stance on it, to move forward and establish a proper trail from the peak. “As local operators in the valley,” he continues, “we felt we had a moral responsibility to think about the long term and what effect bikers would have in this region.”

“The idea is that if you build a really fun trail, people are going to ride on it and not venture on to the tundra or environmentally sensitive ground.” —Paddy Kaye, Joyride Bike Parks

Paddy Kaye, the founder and president of Joyride Bike Parks was brought in to design and build a trail from the peak of Mount Barbour to link with an existing trail in the sub-alpine. Kaye went to work in August 2015.

“The trail we’ve been working on is technically designed as a multi-use trail, but it has berms and flow to it which are great for mountain biking,” he says. “The idea is that if you build a really fun trail, people are going to ride on it and not venture on to the tundra or environmentally sensitive ground. We were able to use our expertise in mountain bike trail building and bring it to the alpine experience.”

The trail on Mount Barbour won’t be finished until Summer 2016, according to Kaye, who is taking cues from where the trail has been utilized up until now. 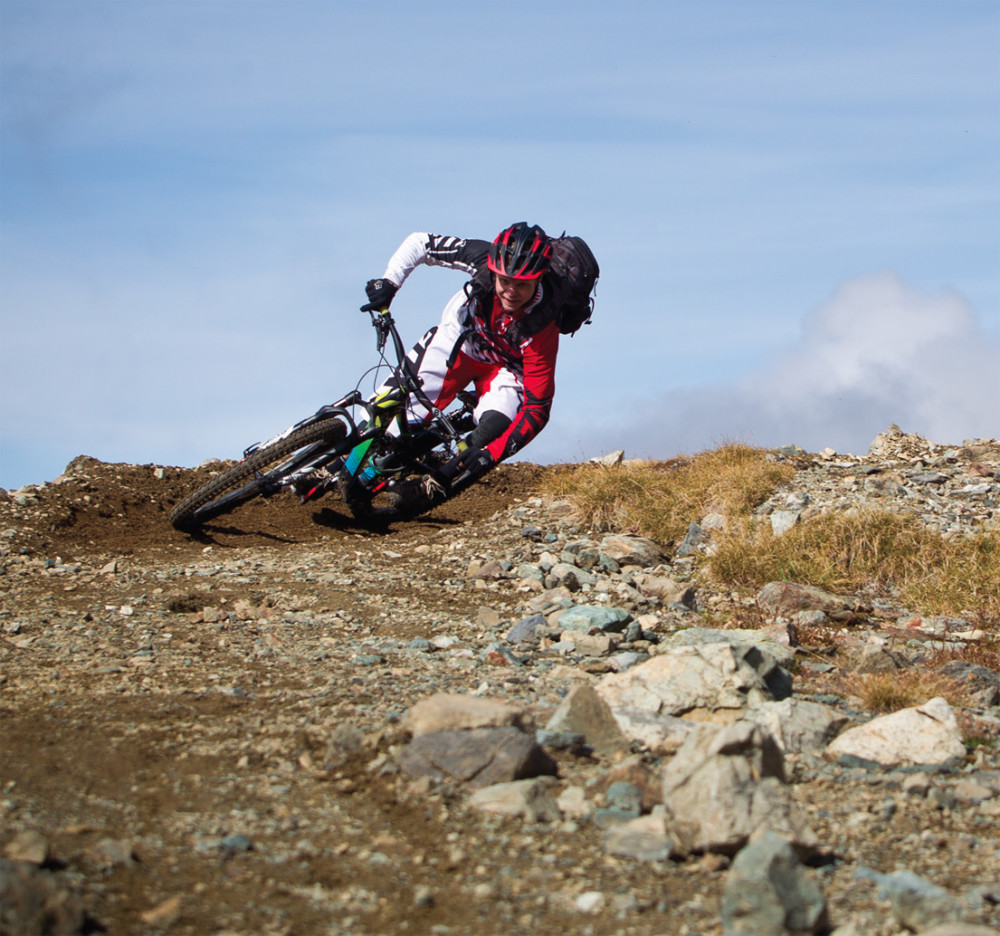 “This is going to be a signature trail for Joyride so we’re going to put the extra effort in,” he says. “We’re going to do some work on the original trail as well: fixing some drainage issues and cutting back the brush along the side of the trail to increase the sight lines to make it safer and more fun.”

The new alpine trail winds its way down the shoulder of Barbour over loose rock and several berms, through the alpine bowl and past a couple of lakes. It then intersects the tree line where several abandoned mines can still be seen. Sticking to the right side of the valley, this is where the new trail links up with the existing sub-alpine trail, originally built in 1907 as a horseback route cut by local miners.

“There’s so much history in B.C. and we’re actually repurposing these trails for a new, modern day experience,” says Kaye. “It’s pretty cool that over a hundred years later, you’re ripping down a trail on your mountain bike that was used by miners to transport their gold on horseback. Instead of letting these trails get overgrown and their history vanish, we’re keeping them alive by giving them another use.”

At over 1,850 metres of vertical from the peak to the valley, this isn’t the type of ride you want to jump off the couch to tackle. The right equipment is also important. Kaye suggests riding a trail or enduro type bike, as there are stretches of pedaling sections where a full downhill rig would not fare well.

“There’s a big picture opportunity here. We want to nurture this industry and help it grow but still give back and protect the land we’re riding on in a legitimate way with the endorsement of the provincial government.”

For Spring/Summer 2016, Blackcomb Aviation is installing a new mounted bike rack system on its machines, a marked improvement over the previous method of long line drops, which can take a couple trips depending on the size of your party. These new racks can accommodate up to six bikes and will make it much easier to depart directly out of their Whistler or Pemberton bases, according to Meeker.

As demand for these types of experiences increases, both Meeker and Kaye hope to expand heli-biking options in the region.

“I think this is a tipping point of what we can do with Blackcomb Aviation and Joyride Bike Parks,” says Kaye. “I’m hoping that in the future we can legitimize more land access and have not just the Mount Barbour trail, but have multiple drops in the area. And there’re all kinds of opportunities outside of biking as well, like studying wildlife and reporting sightings.

“There’s a big picture opportunity here,” he adds. “We want to nurture this industry and help it grow but still give back and protect the land we’re riding on in a legitimate way with the endorsement of the provincial government.”

Learn how to pack for a multi-day mountain bike trip here.