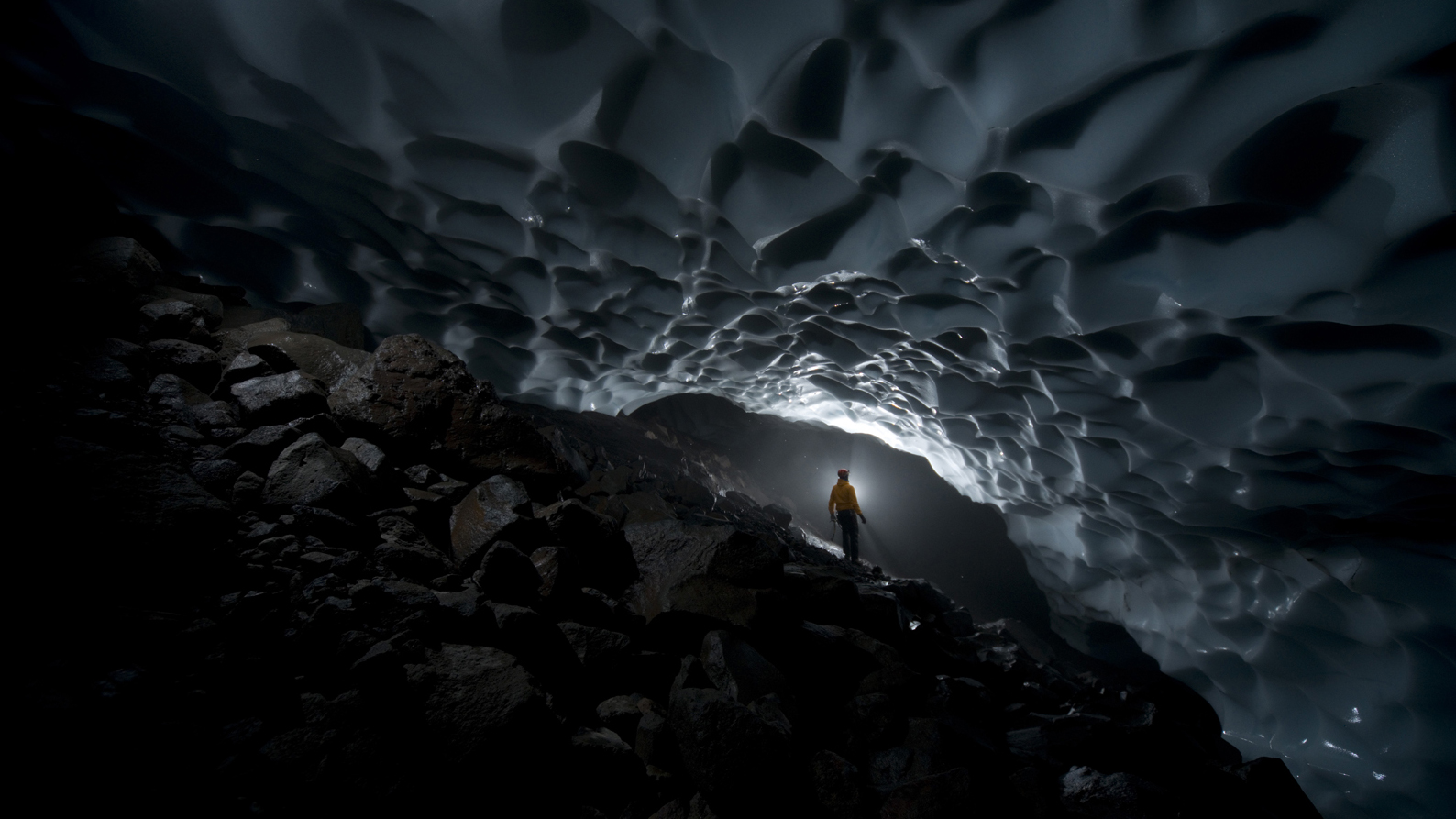 Down the Rabbit Hole: One Photographer’s Unexpected Journey to the Centre of the Earth

He leans back and sips his beer with what seems self-satisfaction. He knows how crazy it sounds but that’s the point: a story that admixes the thrills, fears and abiding discovery offered by caves. Vancouver-based photographer Francois- Xavier De Ruydts has dozens of such tales, but this one, from only his second caving expedition, was influential: it’s the one that sucked him down the rabbit hole of underground exploration.

They call him “Fix” and with good reason: his given name is a mouthful. But the moniker also has utility for his vocation: in the echo-chamber spaces below the planet’s surface, monosyllabic words work best for communication, a fortuitous safety feature in what’s perennially rated one of the world’s most dangerous activities.

Intense but with a playful edge, Fix speaks with the ease of someone who’s found their calling. That the 32-year-old takes his time with questions of a philosophical nature suggests there’s something to unearth for him as well—an inner journey to parallel his myriad physical paths in the four years since quitting a job he didn’t enjoy and moving from Belgium to Canada with his wife, Idalina. Not that he hadn’t done anything radical before. An inveterate traveler and outdoorist, as a teenager Fix rock-climbed in Europe and crossed Quebec by canoe. Following university he rode a bike around the world on what he figured would be his last great adventure before settling down. Afterward, however, the travel bug hit worse than ever. As a trained geographer, he’d had no trouble landing environmental work for specialty housing and waste management projects, but within three years he couldn’t stand it.

When Idalina suggested a move to Vancouver, he didn’t even know where it was and had to look it up on a map—but he liked what he saw and agreed. In Canada he found work as a mapper but quit after only six months to be a photographer. He’d flirted with the idea before, but hadn’t known what type to pursue. Adventure photography had seemed out of the question in Belgium, but Vancouver offered a place where he could make that leap, fully encouraged by Idalina. “She told me I wouldn’t be happy unless I did it, so I started fulltime right away. I put ads on Craigslist for models, shot my wife and friends as well, and soon had a decent portfolio.”

If Fix was deliberate about jumping into photography he was even more calculated on how to succeed. He needed a good self-marketing hook that would differentiate him from other local photographers who concentrated on skiing, boarding, biking, climbing, and paddling. “I thought, well, caving… now there’s a terrible sport no photographer wants to do. I mean, it’s horrible—you have to crawl in mud for hours or days to get a shot. And there’s no light when photography is all about light. Perfect!”

He signed on with the Vancouver Island Cave Exploration Group, did some weekend trips, and came away with a few good photos—very good photos. Next thing he knew Canadian Geographic had green-lighted his proposal for a winter expedition to Castleguard Cave beneath the Columbia Icefield. “I went with some cave divers from the UK. It was a full day travelling on the glacier on skis pulling sleds filled with scuba tanks, and when we got to the cave entrance it was blocked with ice. In winter there’s normally an air pocket to crawl in through, but there’d been epic high water at some point and it all froze. We retreated.”

Lamenting the lost opportunity, Fix tried again with a smaller team. That didn’t work either, but he’d now met numerous cavers with many ideas, so he called Canadian Geographic and convinced them to let him shoot a more general piece. When it appeared as the cover story in a 2012 issue, Fix was ecstatic: he’d realized a five-year photography goal in only two years.

After numerous caving trips and articles and photos everywhere, Fix was worried he’d saturated the small niche market. Thinking it might be a few years before he could revisit the cave trope, and wary of being pigeonholed, he cast about for other edgy pursuits, settling on canyoneering—big in the Alps but virtually unknown in Canada.

His calculus paid off.

“I started pitching a story about a fast-growing ‘canyoneering community’ that wasn’t quite true—there was potential but not much happening. When a national magazine bit on the idea I figured, alright, now I have to create this community. After a lot of time online I managed to get 15 people together in a bar. We formed a group, made a Facebook page, and got started.”

At this same time, like many contemporary photographers, Fix took up filming as well. More kismet ensued: filming waterfalls in West Vancouver he met an ex-canyoneering guide from Switzerland and they exchanged phone numbers. Eventually, armed with only the most rudimentary of beta on a place called Monmouth Creek near Squamish, B.C., they climbed to the top and made a first descent of the otherworldly canyon in two days, with Fix filming.

The award-winning result, Down the Line, launched other cinematographic collaborations, including an expedition with Global TV to Booming Ice Chasm, a preternatural alpine cave on the B.C.-Alberta border. It was all coming together—albeit in the bowels of the Earth.

“With both caving and canyoneering you’re descending into the crust, so there’s intimacy and exploration,” says Fix of their natural fit. “Neither is as demanding as rock climbing; they’re more about enjoying the moment—on a first descent you have no idea what’s around the corner.”

Much like squeezing through a tight cave passage and discovering a larger amphitheatre on the other side, Fix’s choices continued to deliver new experiences, expanded purpose and opportunity in the subterranean world. “It’s interesting how one thing leads to another when you believe in it.”

Author Jules Verne’s famous Journey to the Centre of the Earth begins on the glacial summit of an Icelandic volcano, and ice, snow and vulcanism likewise figure into Fix’s own canon. “As a geographer, I’ve always been interested in volcanoes. A vulcanologist told me about some ice caves on top of Washington’s Mt. Rainier. There were no photos on the internet, only a few tales of climbers hanging out in them to survive storms. I had to see them.”

Fix read scientific papers describing how steam vents were indeed melting the mountain’s summit glaciers from beneath. He assembled a team, left Vancouver on a Friday, and by Sunday was atop Rainier. Battling altitude sickness, the group explored a system of ice-chambers that runs five kilometres around the crater. “It was humid and warm inside. We called one cavern ‘The Bird Room’ because a bird was frozen in the ceiling. The lines in the ice corresponding to periods of deposition and melting were amazing,” recounts Fix, who’s headed back in August 2014 to map the system and compare its current configuration to a 30 year-old chart, as well as collect samples of live bacteria for a Canadian microbiologist.

Mapping is common practice with cavers—in part because it’s easy to get lost in labyrinthine passages in the dark. This past winter, along with a Belgian buddy, Fix joined a French expedition to Guangxi Province in China to explore one of the world’s largest cave systems. Over 15 days the team mapped their way through three enormous grottos bristling with speleothems (cave formations): stalactites, stalagmites, pillars and the geologic peculiarity known as cave pearls. Despite the novelties of these caves’ nether reaches, they also saw the downside of such spectacular natural phenomena: speleothems from the most easily accessible vaults had been robbed by locals to sell in local markets—another reason Fix sees to explore the lithosphere while he can.

The scope and grandeur of the Guangxi caves also presented unique photographic problems. “It was tough,” recalls Fix. “Canadian caves are small in comparison: instead of five flashes and two guys to help out, in China you needed 20 flashes and 10 guys—it’s another scale. Anything that wasn’t natural lighting was difficult. In a room that’s 100 by 200 by 100 metres it could take hours to set up a shot. Even synching flashes was hard—the radio triggers are made for studios, not large distances.”

Technical limitations are rife in cave-photography. “The first challenge is to get into the cave with your gear in one piece,” says Fix. “The main problem is dirt. Dry mud is the worst: it’s microscopic particles that get on your hands and go everywhere.”

Other quandaries fall under representation. Caves are naturally pitch black: how do you convey that? “You have to light so it looks natural—not like it would be for a tourist. A moment that channels adventure, exploration and natural ambiance. Less is generally better, but every situation is different. Each project requires you to rethink what you’ll bring and to redesign how you’ll keep it from getting wet or dusty.”

Which means you have to be one part inventor, one part MacGyver. In Booming Ice Chasm, for instance, Fix made his own lights and figured out how to keep tripod legs steady on a convex ice surface—with tennis balls that held on ice the way a wool sock would.

Equipment isn’t the only thing at risk underground. Many dangers are the same as in the mountains: falling rocks; falling people; rope or equipment failures. “The difference is that if you get hurt in the mountains you can call in a helicopter,” notes Fix, “but if you break a leg 300 metres underground you have to go back up the way you came in. Not many accident victims die right away in caves; they might break a leg and have to wait five days for rescue… so many die of exposure and exhaustion.”

Still, Fix sees enchantment and opportunity as far outweighing the challenges. The Earth’s inner spaces offer pure exploration in an age when there’s little chance to be the first human anywhere. “It’s a different way of looking at the Earth. You see pristine things that have never been altered by humans, which is rarely true on the surface. For the most part caves are exactly as they were thousands of years ago.”

As his photos attest, there’s clearly more than planting flags and bragging rights at stake. “The most amazing thing is the feeling of being in the belly of Mother Earth,” says Fix. “Many people fear being stuck in the dark in a claustrophobic space, but I find tight passages comfortable. Maternal, protected. Like a womb—a stable environment. There’s no wind, no sun to change the temperature, it’s dark, and quiet. The only thing you hear is water dripping—plick, plick, plick—and your heartbeat.”