Falling out of fashion like the long, skinny skis that once lined its patio, The Whistler Lodge was on its deathbed last season. Having tumbled into disrepair, the lodge, one of the last remnants of Old Whistler in an otherwise modern resort town, had become a prime target for demolition in a saturated real estate market. But thanks to a local couple, the former (and legendary) UBC Lodge, not only dodged the bulldozer, it’s now thriving. 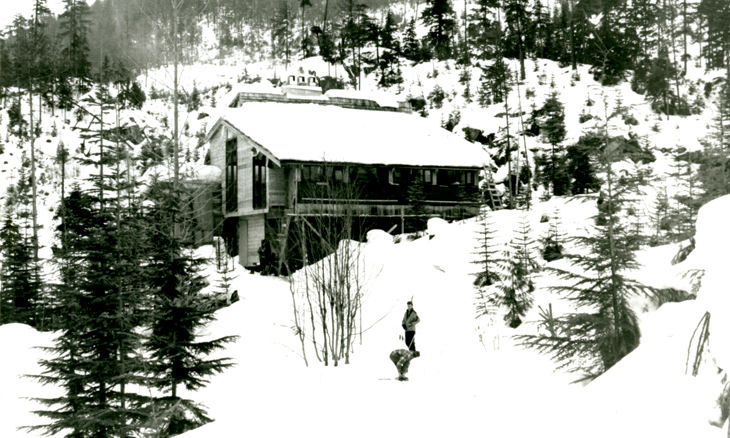 “A lot of people around the valley have ties to this building. The old ski patrol parties held up there — there are crazy stories from those I wish I could tell. Every old-time local has got a story about this place, a story and a smile.” 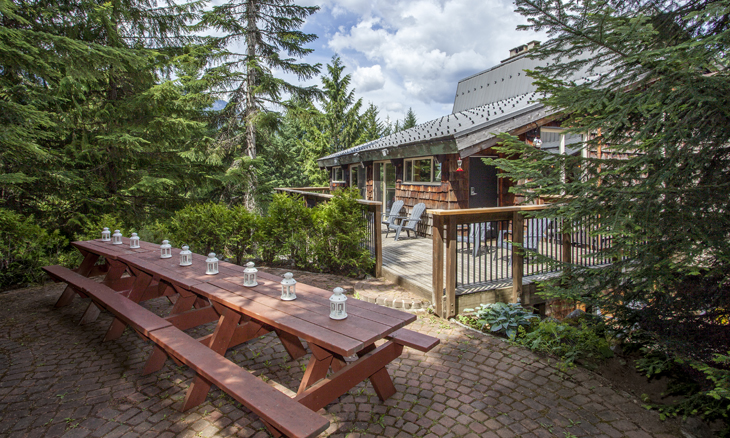 HISTORY
When Whistler Mountain started development in the area, it offered free land to select ski clubs — UBC’s Varsity Outdoor Club (VOC) was one of them. Formed in 1917, the VOC was an integral part of promoting adventure in the Coast Mountains at the time, and hugely impacted the growth of skiing and mountaineering in the area post-World War II.

With the land secured in the early 1960s, volunteers from UBC went to work on building the lodge. A grad student at the time, Whistler legend Karl Ricker was the crew’s foreman. “When we got there, it was just a rectangle drawn on some logging slash,” says Ricker. “So we arrived on the scene with compasses and measuring chains to try to figure out where this mysterious rectangle was. That was the first hurdle — finding the damn thing.” 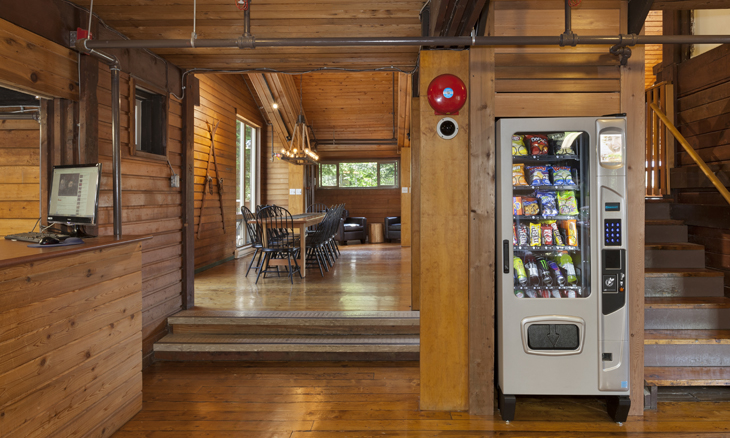 Using a rudimentary skid road that loggers had cut through the property, Ricker and his team managed to get four-wheel drive vehicles up close to the site for about a month. “Then the rains came and put a stop to that, so we had to haul stuff in roughly three-quarters of a kilometre to the cabin site. Everything was carried in from there by hand.”

The build teams worked only on the weekends, and slept on-site in a large 30-foot tent. The lodge was completed in 1965 (before the Garibaldi Lifts were even running) for only about $16,000 in materials.

“We got the roof on it before Armistice Day (aka Remembrance Day) weekend,” says Ricker. “There was a picture of it on the cover of the Vancouver Province with the headline ‘Students Get an A for Effort’ or something like that. That picture is actually on the wall of the cabin now.” 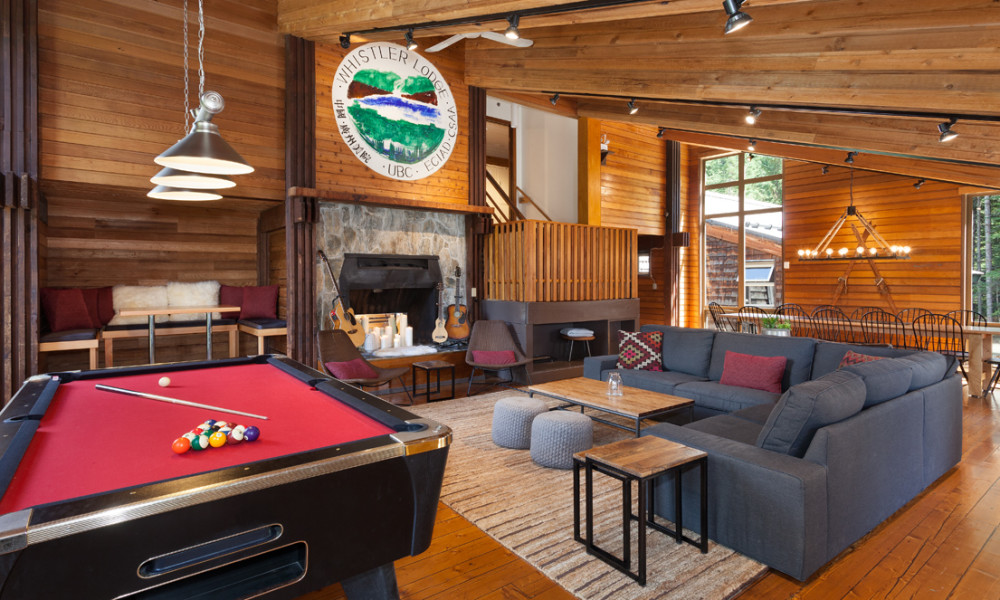 As time went on, use of the lodge began to wane. By 1974, the cabin was hardly used, and the VOC sought to unload it. “The university took over from the Outdoor Club through a terrific fracas,” says Ricker. “They tried to look after it, but it withered.”

Once popular as a cheap(er) Whistler accommodation spot, over time the lodge became financially unviable. The final blow came after the 2010 Winter Olympics, when Hostelling International purchased Whistler’s Athletes’ Village and converted it to a hostel. The competition all but buried the lodge.

After an assessment valued the property at close to a million dollars, UBC’s Alma Mater Society (AMS) held a referendum in 2013 and the decision was made to let the property go. 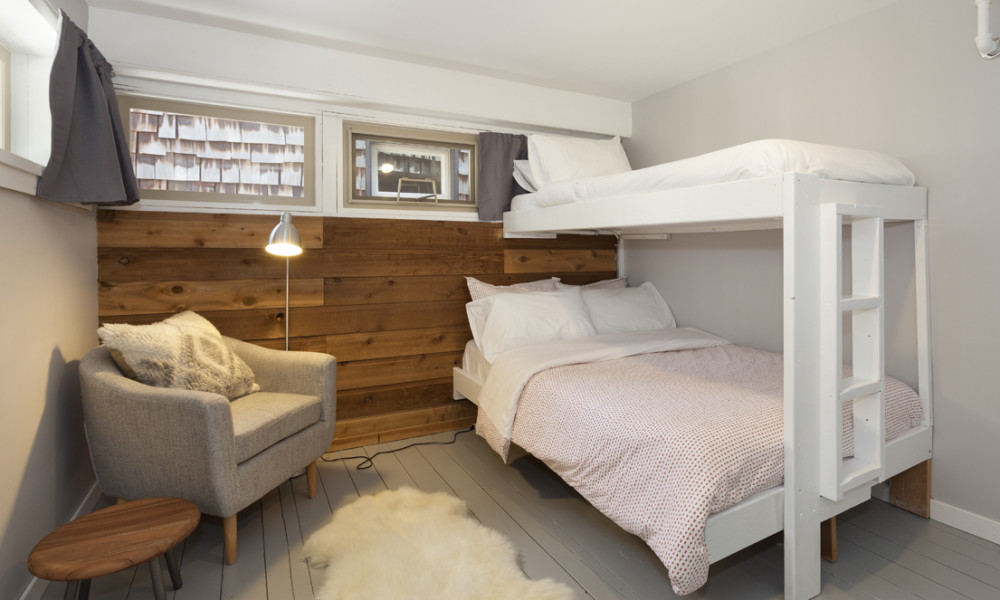 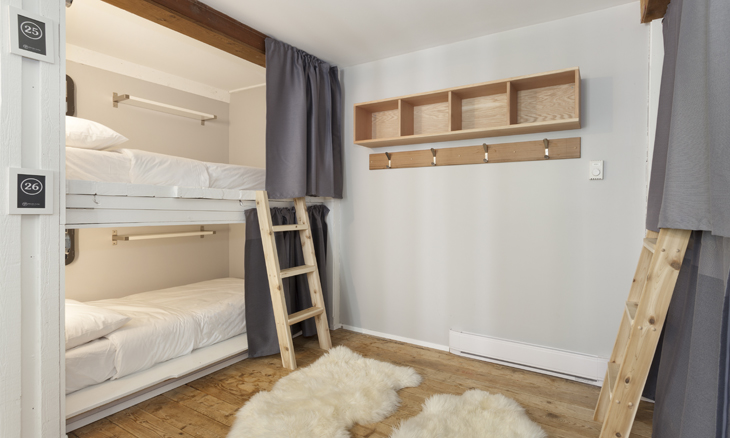 RESURRECTION
Chris Pelz and his wife had been looking for a property on which to build a family home when the lodge came up for sale in early 2015, “I knew it was a beautiful property,” says Pelz, who first visited the lodge some 20-odd years ago. “And it really is quite unique to have something so large — 1.8 acres — in Whistler.”

Pelz wasn’t alone. Other developers had also been snooping around the property. The number of bed units alone would make it a significant investment for a townhouse project and word around Whistler was that the lodge would be torn down due to its age and neglect. 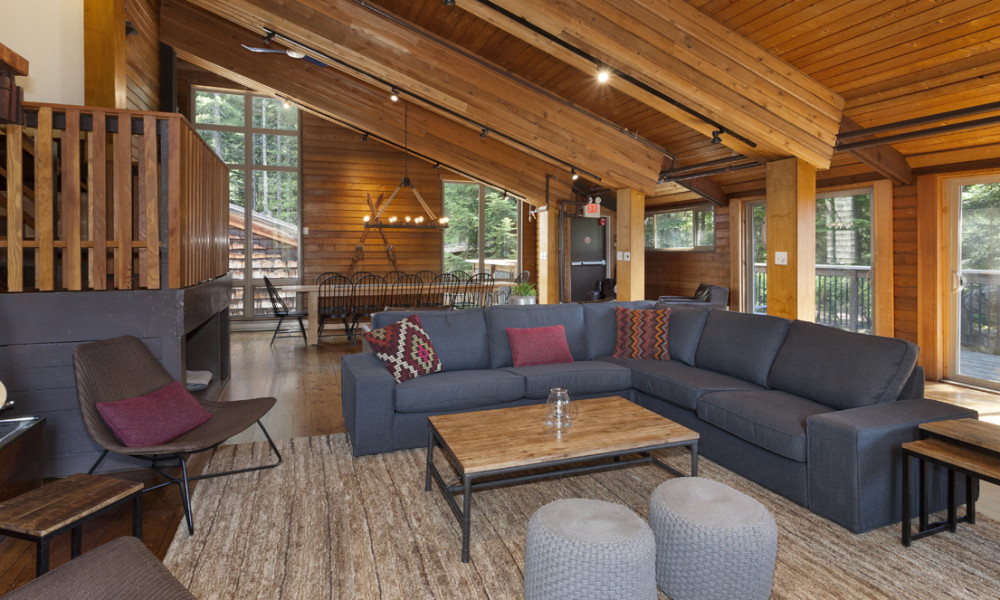 Pelz admits he had originally planned on just that, but after spending some time on the property and delving deeper into its history, he and his wife had a change of heart. “Angela and I just looked at each other at the same moment, and it was unanimous. There was no way we could tear this place down.”

Instead they invested about half a million dollars into the restoration, sourcing all local contractors and suppliers. “The lodge was a mess,” Pelz says. “It had been run into the ground and couldn’t have been any more beat up. So we just fixed it up and brought it back to its old glory and gave the whole property a haircut.” 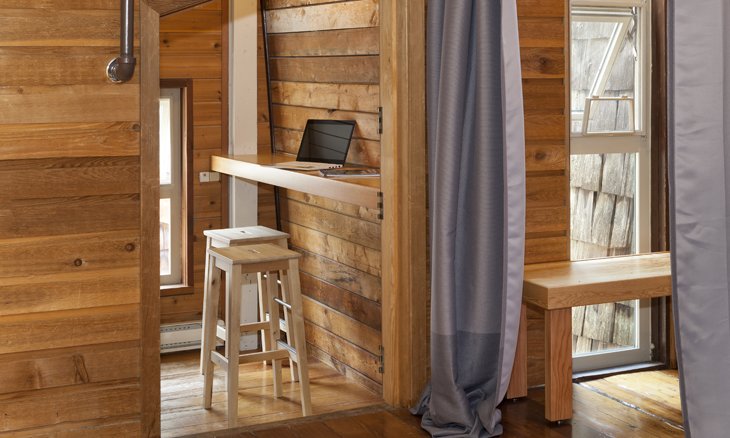 Current manager, Andrew Sakamoto, was involved in the lodge’s rejuvenation from the get-go. He says one of the biggest challenges was maintaining that old Whistler charm during the facelift. “It was really hard to figure out where to draw the line with the renovations. There’s a lot of old wood, it really does have that rustic lodge feel and we didn’t want to lose too much of that. If these walls could talk, I’m sure they’d have some crazy stories to tell.”

And the walls did talk, in a way. During the renovations to the bathrooms, Sakamoto stumbled across something sandwiched in between the plywood. “We pried that open and there were all these old-school posters from bands and a couple of Powder Magazine covers,” he says. “The oldest one I found was from 1978. There was all sorts of stuff just glued onto the walls. And that’s a total throwback to old Whistler.” 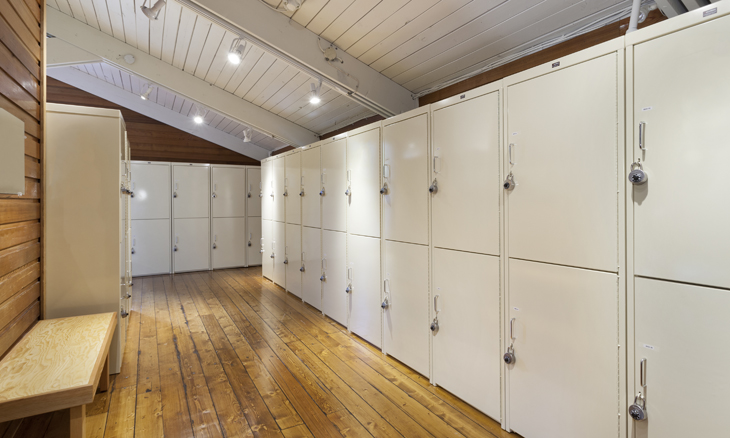 Centrally located between the Village and Creekside, the lodge now boasts 42 beds in dorm-style bunkrooms as well as private and semi private suites. Amenities include a sauna, hot tub, onsite laundry, a ski and board waxing area, shared kitchen space, secure gear storage, a pool table and a spacious lounge. The property is divided into two buildings, one communal designed for socializing and the other for lodging.

“We wanted to keep the dorm side as kind of a quiet area where you can get some privacy and relax,” Sakamoto explains, “and have the common areas more social and vibrant. We really try to encourage people to, you know, talk to each other. Be friendly and help each other out with advice, especially for people trying to find jobs and places to live in the early season.” 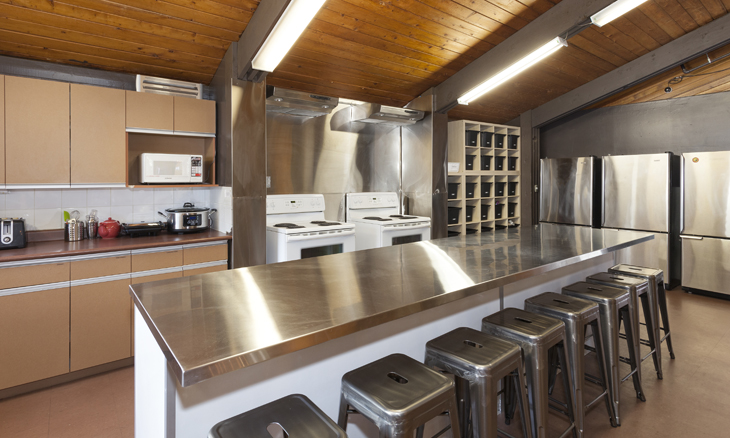 And people are definitely talking. Since the new ownership and facelift, popularity has surged and the Whistler Lodge has skyrocketed in online rankings for places to stay in Whistler — all through word of mouth.

“We’ve had people come through that were part of the original Varsity Outdoor Club,” Sakamoto says. “People that actually built the place and are happy to see it is still going.” 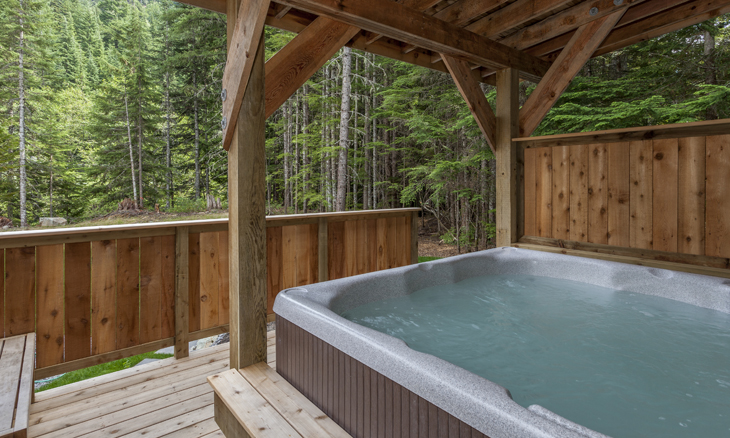 “I’m glad it’s in good hands,” says Ricker. “The new owners definitely fixed it up and I see stuff I personally built over 50 years ago, still in good shape. I’m very grateful for that.”

Pelz isn’t one to bask in the gratitude, however. “We try to be humble people,” he says. “But we’re quietly very proud. This is from the heart and at some point we’ll throw a fiftieth anniversary party, but for now it’s just nice to know there are a lot of happy kids coming to town at $30–$35 a night.” 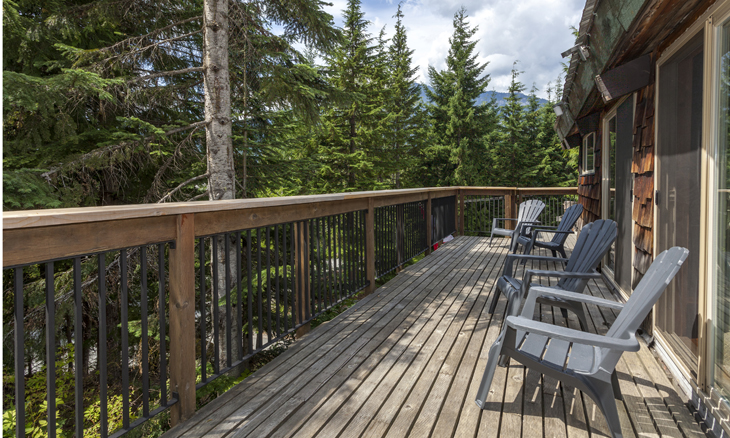 Sakamoto, one of many who came to Whistler for a season and never left, agrees.

“The goal is for us to be here for another 50 years and continue to be a place where people come to fall in love with the mountains,” he says. “And maybe this is one of the first places people stay when Whistler really gets its hooks into them.” 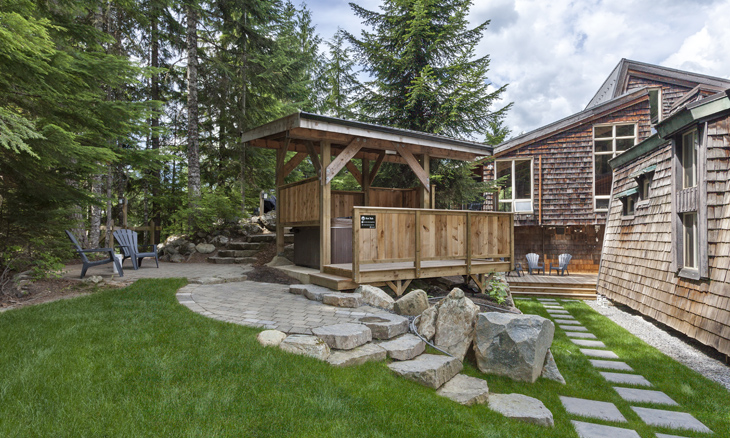