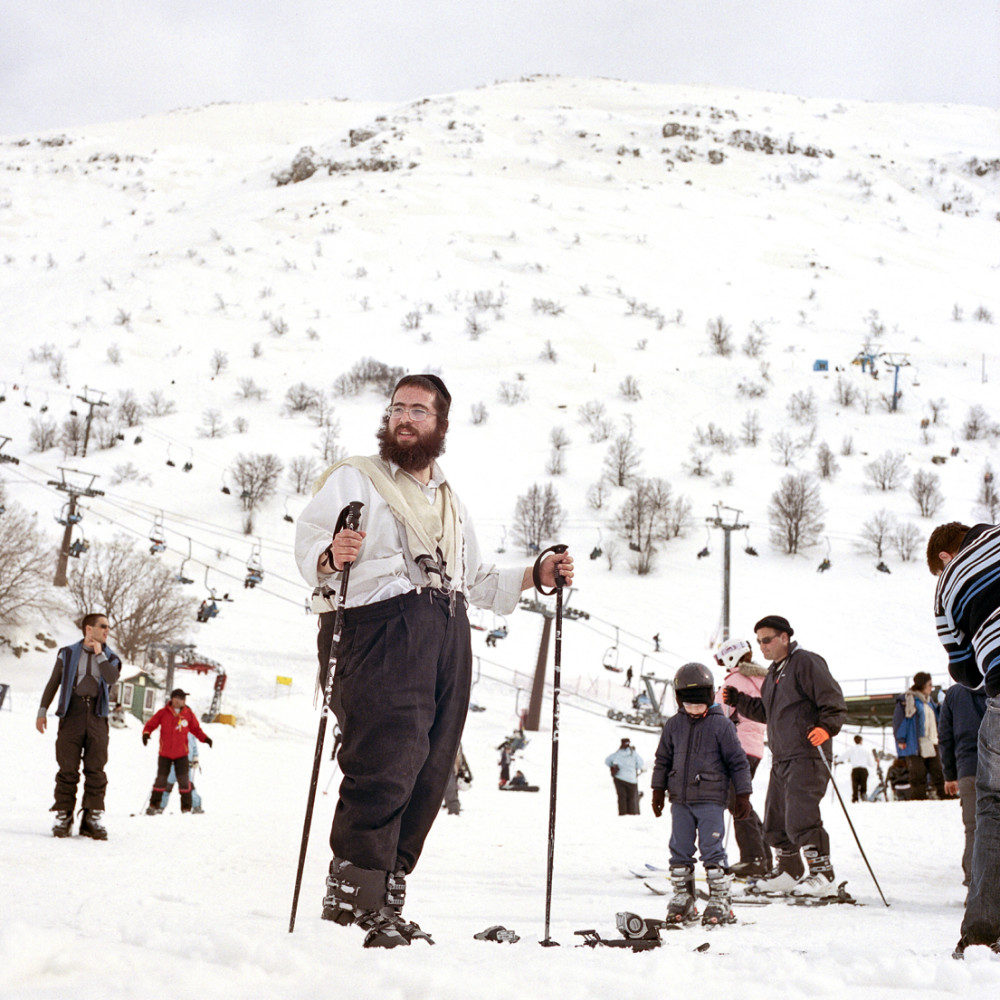 The instant we land in Tel Aviv, we grab a rental car and head to the Golan Heights. If we hurry, we’ll get some turns in by day’s end. Yep, I said turns. As in ski turns. In Israel.

Just over a month ago we learned you could ski in Israel. And now, after 13 hours of flying, fresh tracks are a few short hours away.

Heading north from Tel Aviv, following Highway 6, the urban sprawl of Israel’s biggest city slowly gives way to beautiful countryside. Road signs direct us to legendary towns like Nazareth and Tiberias. We are in a land of biblical history, but we aren’t following the busloads of religious pilgrims; we’re heading for snow.

And there’s snow in the Golan Heights.

As we pass the Sea of Galilee and head up the twisting road to Mount Hermon, the storm clouds look promising. It’s raining in the Upper Galilee, but on top of the 2224-metre Mount Hermon, it’s sure to be snowing. Have the stars aligned perfectly for a powder-filled tour of Israel’s only ski resort?

Nope. They haven’t. A military roadblock is barring the entrance to Mount Hermon – unlike at home, where snowstorms are a good thing, in Israel, snowstorms shut the road down. No one has snow tires in Israel, so no one can actually get up there. And we’ll miss all the fresh snow because it will take a week before the road is once again passable.

“They descend upon the lift lines, magic carpet and toboggan runs in jeans and track pants, ecstatic at something we as Canadians take for granted.”

A week later, after tours of all the usuals (Jerusalem, the Dead Sea, Masada and the West Bank) we head back to Mount Hermon. Eight thousand other people choose to do the exact same thing. A hundred loaded buses chug up the winding road that switches back and forth from the lush green of the Golan Heights to the snowy peak of Hermon.

We pass Druze villages and barbwire fences with signs that warn: “DANGER! MINES.” And when we finally arrive, the parking lot is chaotic. Orthodox Jews, modern Muslims and everyone in between fall out of the buses, yelling, laughing and marveling at the snow. Most of them have never seen snow before. They descend upon the lift lines, magic carpet and toboggan runs in jeans and track pants, ecstatic at something we as Canadians take for granted. 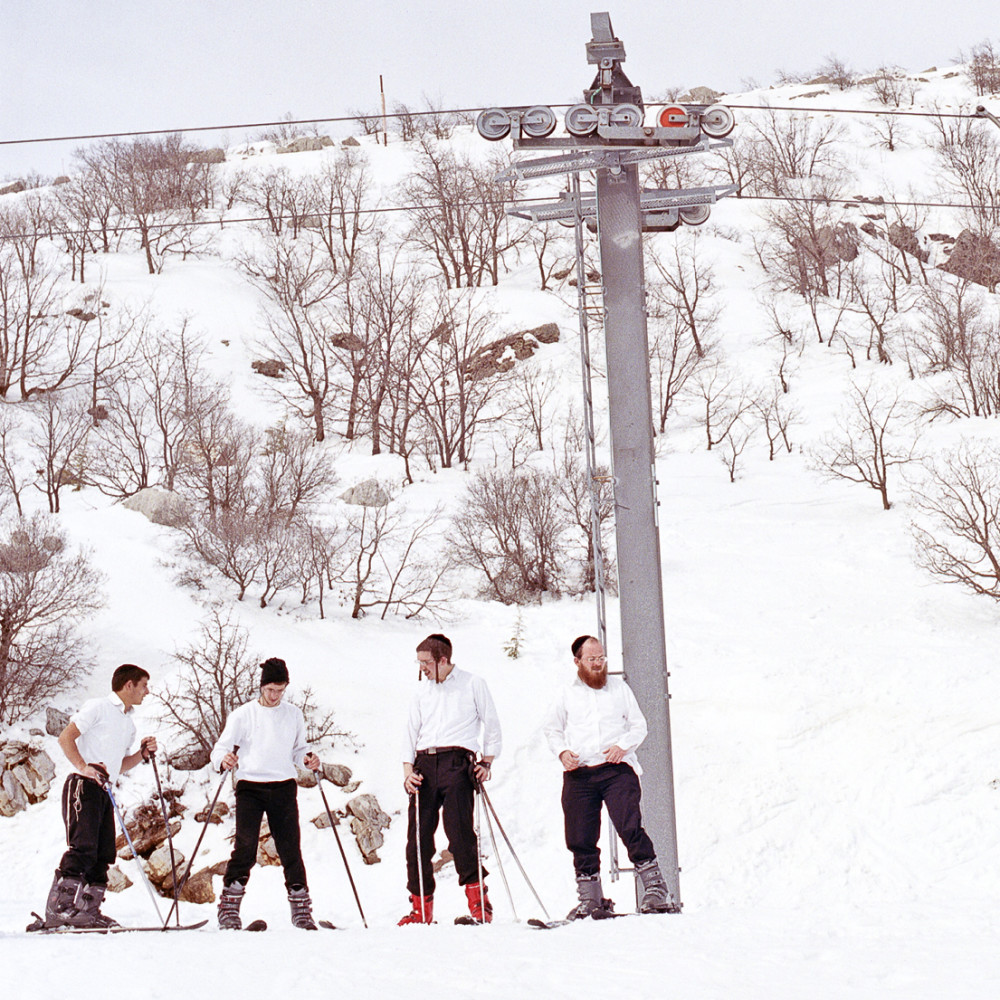 As we get our rental skis (165cm, 2008 Salomon Scramblers) the rental guy asks, “Do you know how to play ski?” before deciding how tight to make my bindings. We head up the two-person Dopplemeyer chairlift and from the top we can see Lebanon, the Sea of Galilee and Syria. It’s a beautiful day: five degrees, bluebird sky and conditions reminiscent of Canadian spring skiing. We do a couple of high traverses to get away from the dangerously out-of-control locals, and discover the brownish snow, tinted with sand, is slightly lighter than the corn snow of home, and a joy to ski. We schuss our way past cliffs and under chairlifts, getting fresh tracks over and over again. The chairlift riders overhead hoot and holler at our skills and for an instant I feel like a professional skier carving dangerous lines that no one thought possible. I’m not. I’m just one of the best skiers on the hill. Which isn’t saying much.

“We pass Druze villages and barbwire fences with signs that warn: ‘DANGER! MINES.’ And when we finally arrive, the parking lot is chaotic. Orthodox Jews, modern Muslims and everyone in between fall out of the buses, yelling, laughing and marveling at the snow.”

Mount Hermon began operating in 1971. With 440 metres of vertical drop there are five two-person chairlifts, a couple of t-bars and a magic carpet. There are 1250 acres of terrain, 45 kilometres of piste, a mountain coaster and tobogganing hills. Hermon isn’t blessed with bottomless powder, but the skiing is really fun.

Riding up the chair with local university student Annette Schwarz, she tells me she hasn’t skied in four years, but she loves it. 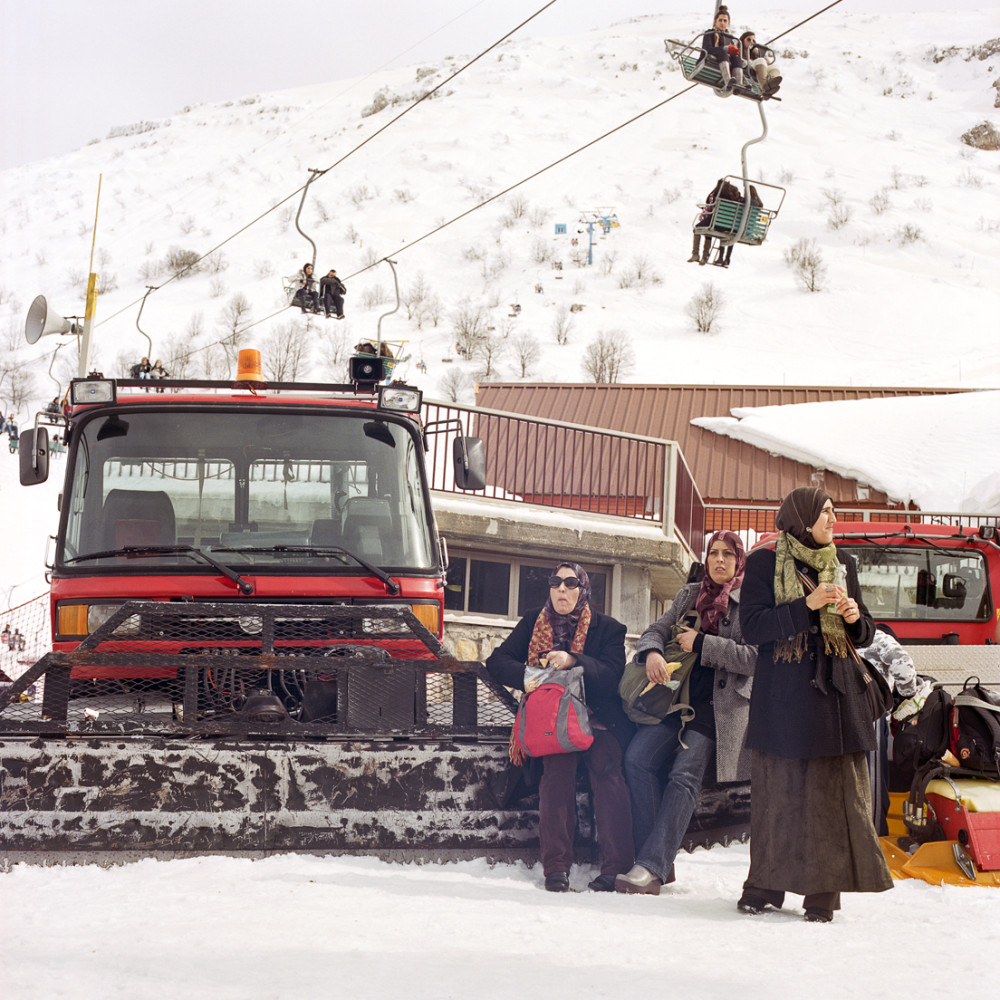 “When I finish university I will go to Bulgaria,” she tells me. “My parents go, it’s very nice. Here it is very small. And the same run over and over. It’s very boring.”

I let lie the myth that all of Canada looks like British Columbia and don’t tell her my local Ontario hill is smaller with less terrain.

But you don’t need to ski at Mount Hermon to be entertained. The people-watching is limitless, and flabbergasting. Men with shopping bags tied around their shoes slide around the parking lot, young Hasidic Jews with curly sideburns fumble awkwardly on skis, Muslim teenagers throw snowballs at one another, sun-wrinkled Tel Avivians enjoy the rays and yarmulke-clad teenagers strap on snowboards.

It’s impossible to take it all in. I sit on the chalet’s patio with a tall can of Carlsburg amid constant outbursts of laughter and shouting . Within half-an-hour, I witness two ambulances arrive and take people away. I watch a boy clock his sister in the head with a basketball-sized snowball and another woman on skis careen out of control through the sea of humanity before crashing into the patio railing. She’s okay, and laughing. Then her friend walks up to her, carrying her own skis awkwardly before accidently dropping them on top of her crumpled friend. 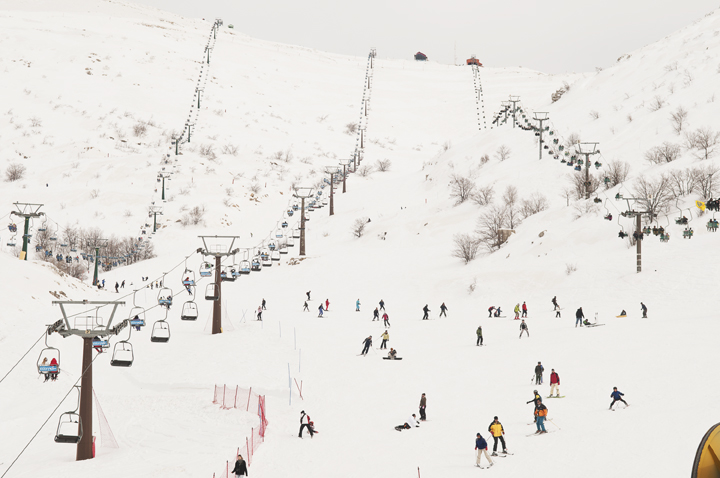 The bottom of the mountain feels like the most dangerous place in Israel as I constantly look over my shoulder for runaway snowboards, erratically carried ski poles or out-of-control skiers. As the lifts shut down at four o’clock, everyone loads back into the buses for the slow ride home. We join them and head back to Ben Gurion airport in Tel Aviv.

“The people-watching is limitless, and flabbergasting. Men with shopping bags tied around their shoes slide around the parking lot, young Hasidic Jews with curly sideburns fumble awkwardly on skis, Muslim teenagers throw snowballs at one another, sun-wrinkled Tel Avivians enjoy the rays and yarmulke-clad teenagers strap on snowboards.”

There are attractions in Israel beyond the streets of Nazareth, the biblical relics of Jerusalem, or the holy sites of Galilee. Its compact geography allows us to go from mountain biking in the desert, to paddleboarding in the Mediterranean, to skiing in just two days. The seven-hour drive from one end of the country to the other takes you from snow-capped mountains to deserts, with everything else in between.

And while Israel continues to make the headlines, conflict for this country is nothing new. The reports have never stopped busload after busload of international religious groups from making the pilgrimage to Jerusalem. Israelis are not huddled in bunkers, dressed in bulletproof vests or preparing for Armageddon. They are getting on with their lives.

The potential for outdoor adventure in Israel is endless. The trail systems in Israel are experiencing more use than ever before. And that’s because the hiking and biking is world class. The skiing? Not so much. But Mount Hermon is worth a look anyway.