For my first meeting with Brian McLellan-Tuck, I suggest lunch at a restaurant. This turns out to be the wrong approach. Brian doesn’t eat like most of us do. 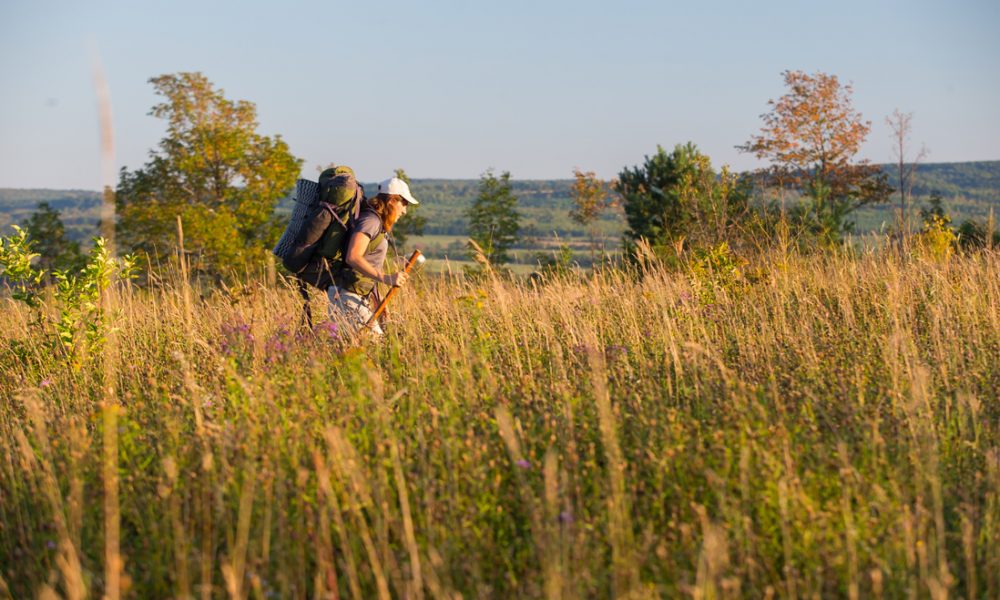 It’s not that he’s a fussy eater. He’s an opportunistic eater—a forager with an impressive internal database of edible-plant knowledge—and a dumpster-diver determined not just to meet his nutritional needs for free, but to divert food from landfills. To demonstrate these commitments, Brian recently hiked the entire Bruce Trail without buying so much as a dollar’s worth of food before or during the mission.

Sporting a 1969 bandana beneath his curtains of hair, Brian is a soft-spoken paddling guide in his 20s who lives in the village of Heathcote in a disused greenhouse at Free Spirit Tours HQ. Last May, Brian took a break from his guiding job at Free Spirit and began his Bruce Trail hike at the Southern Terminus cairn in Queenston Heights Park.

It’s not that he’s a fussy eater. He’s an opportunistic eater—a forager with an impressive internal database of edible-plant knowledge—and a dumpster-diver determined not just to meet his nutritional needs for free, but to divert food from landfills.

He packed light: a 40-pound backpack containing a camp stove, a sleeping bag, a MEC Scout Tarp, a LifeStraw water filter, and raingear. He carried a month’s worth of supplies—all scavenged from dumpsters or given to him—including couscous, wraps, crackers, dried hummus, oatmeal, bouillon, and a few spices. He gathered every other edible for his 890km trek on or near the trail. 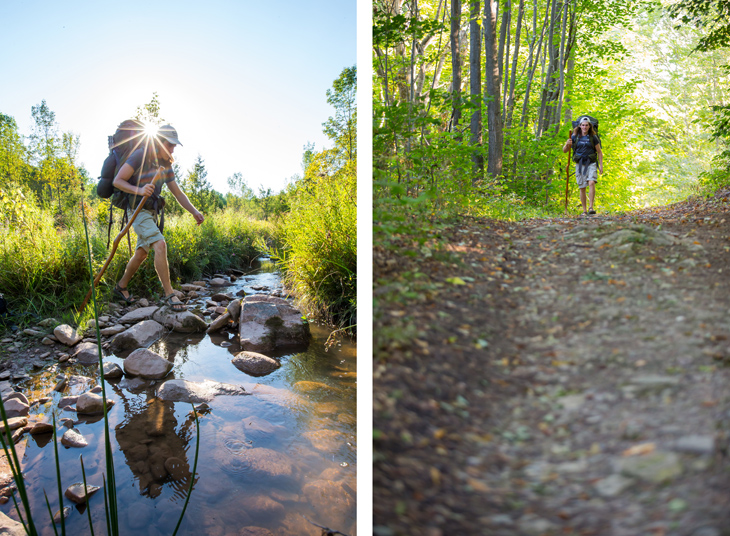 “I harvested as I was hiking along”, he says. “I’d see a leek patch, fill my bag, find some nice dandelions, throw those in, stop for 5-10 minutes and pick fiddleheads. I ate mostly raw. The only stuff I had to cook was nettle, fiddlehead, and dryad saddle mushroom.” He also found morel mushrooms and ate them raw.

Brian doesn’t remember the last time he was sick with any sort of ailment. And his diverse diet provided more than enough energy for the long hike. “The energy came out of nowhere during my first hour of hiking in the morning,” he says.

He covered about 30km per day. Brian’s only slowdown came roughly a quarter into the journey when he pulled a muscle in his leg, forcing him to quit early a few days and rest up. He credits his quick recovery to his wild diet and to a diamond-willow walking stick given to him by a retired couple he met on the Trail (who also gave him dried fruit). The stick made him feel a little safer when he encountered coyotes south of Burlington.

“I set up in this forest with open ground and I saw coyotes sniffing around about 50 feet away, watching me, and I heard them yipping all night.”

“I fell asleep and then woke up and it sounded like they were about 50 metres away, all over the place.” The scruffy canines appeared again near Lavender. “I set up in this forest with open ground and I saw coyotes sniffing around about 50 feet away, watching me, and I heard them yipping all night. I made a stick barricade on the open side of my lean-to and had my walking stick by my side.”

Though the Bruce Trail Conservancy discourages camping near the trail, Brian’s bivouacking was as low-impact as possible. He would pull over at around dinner-hour each evening and pitch his tarp on a piece of flat ground near a water source. Nobody hassled him. Even the coyotes kept a respectful distance. And at one site in the Niagara section, Brian noticed patches of fur on the ground.

“Then two deer walked right up to me. It must have been their nesting area. They were looking at me and stamping. They came back half an hour later. Then they came back again. I felt bad, but it was the only spot around.” 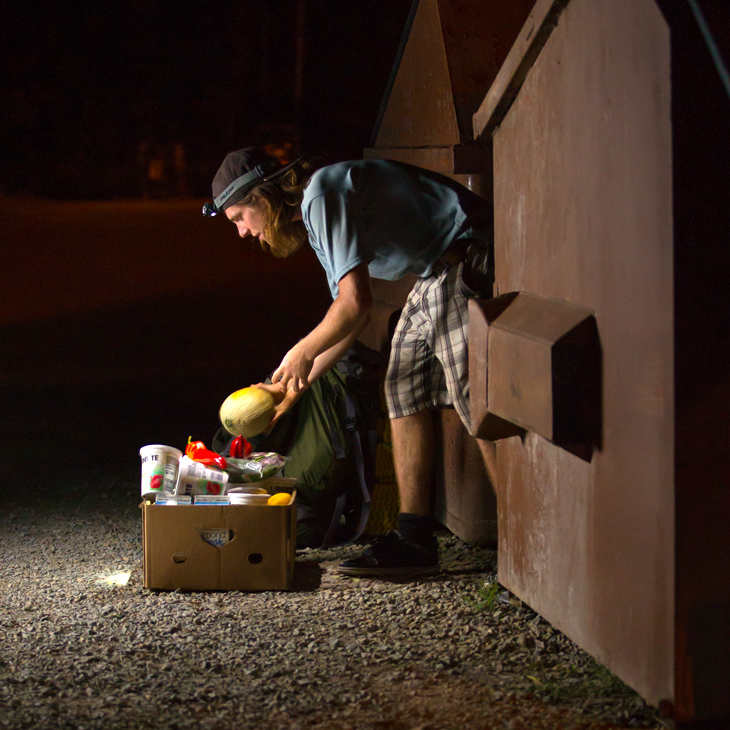 He didn’t see a bear but on his first night in Bruce Peninsula National Park he heard one sniffing around his hoisted pack. Although the Peninsula yielded Brian the fewest wild edibles—probably due to the rocky terrain and thin soil—he found his one paydirt dumpster behind the Lion’s Head supermarket. Here, three days before reaching the Northern Terminus cairn at Tobermory, Brian recovered more peppers, cherries, and grapes than he could eat. Then after finishing the Trail, he hitchhiked back down to Lion’s Head to meet his friend and fellow Free Spirit guide Jesse Godlington for a day of rock climbing and a ride back home—but not before they hit the dumpster in town one last time.

“The employees sitting at a picnic table nearby didn’t care,” says Brian, “but then the manager came out and shouted ‘What are you doing!?’ and we said, ‘Getting food!’ He said, ‘That stuff’s no good, it will make you sick!’ and I said, ‘I’ve been doing this for a year and a half and I haven’t been sick yet.’ So we had a big box of food and he said ‘You can’t take that!’ and we were like, ‘Come on, man!’ And he let us take it. After telling us to never come back.”

This is a form of activism and also a livelihood—one that strives to remedy a systemic wastefulness that few acknowledge.

Hiking Canada’s longest footpath in its entirety on gathered or scavenged food isn’t an accomplishment that will be heralded by the Bruce Trail Conservancy, or Health Canada. The reasons for this are complicated. Gathering wild edibles, particularly the lesser known varieties, is a fringe activity in a country where mass-produced or packaged food is relatively cheap and safe. And not many citizens want to believe that governments and food suppliers run faulty supply chains that waste millions every year.

Since there’s no clearcut solution, citizens like Brian take action for themselves. This is a form of activism and also a livelihood—one that strives to remedy a systemic wastefulness that few acknowledge. I’ve always admired wild-food gathering from afar, but never believed that in the Canadian climate one could survive for long on it—even during the five or six months when it’s viable. Brian proved that with a little help from dumpster-sourced foodstuffs, you can.

And a few years ago, I would’ve felt ashamed to see someone dumpster-diving; after meeting Brian, I realize it can be done with dignity.

Find out how to forage for edible plants on the Bruce Trail here.