If you see a bit of extra smoke wafting through the Whistler Valley this winter, it’s probably not a sit-in at Rebagliati Park, but rather the aftermath of all the birthday candles Whistler is blowing out this year. Winter 2015/16 marks 50 years of ski hill operations in Whistler, and Cliff Jennings has skied here for every single one of them.

Cliff worked for Whistler Mountain before the lifts were built. He and wife, Vivian, managed one of the first lodges in town. He helped establish Whistler Search & Rescue in 1972 and was one of the first Municipal employees when the Muni was created in 1975. And he’s still here. So to celebrate a half-century of pow turns, house parties and all the adventure that comes with life in a mountain town, we asked Cliff to share some photos and memories of those early years of Whistler. And like so many of us, his story begins in one of those viscous Coast Mountains autumn rains. 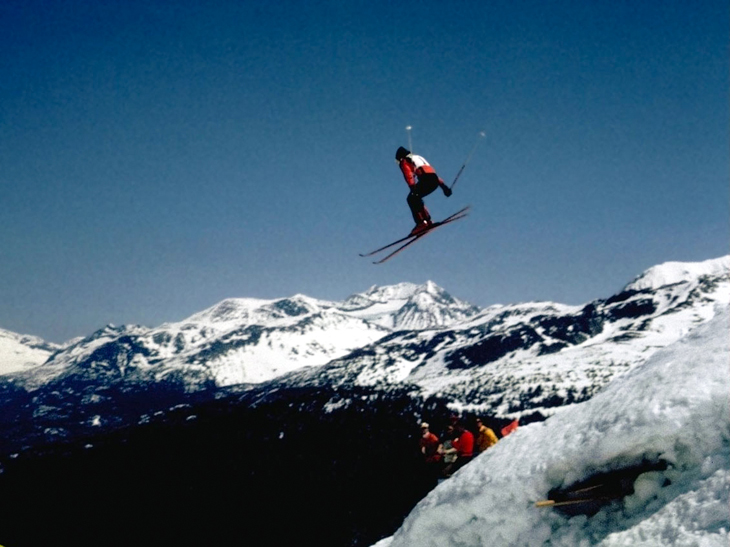 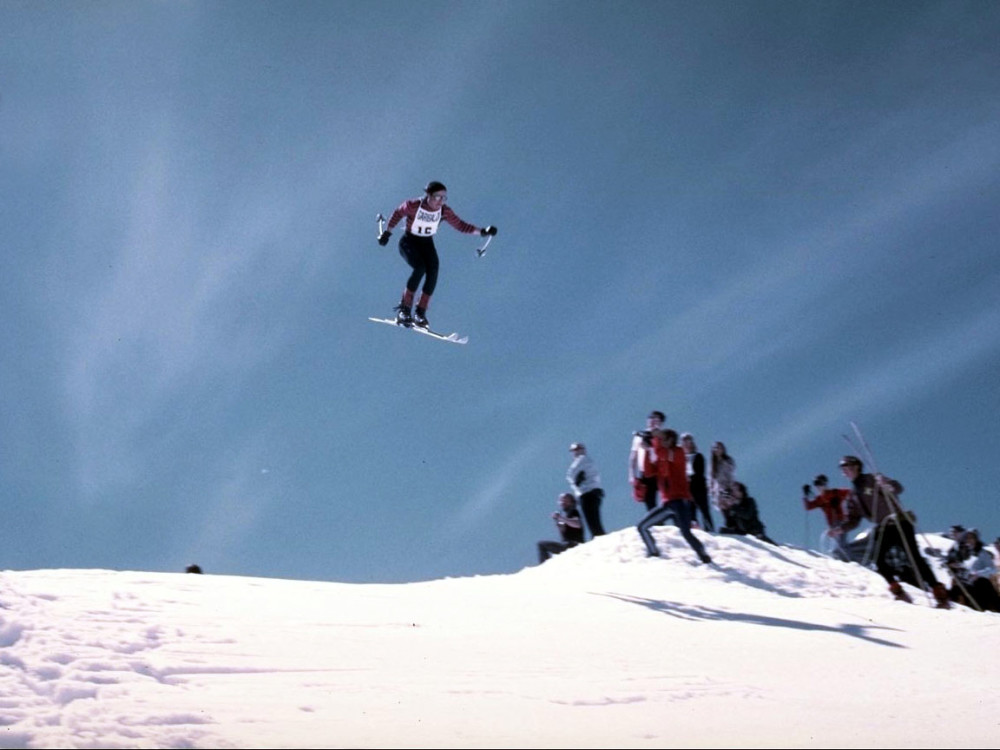 FIRST IMPRESSIONS
“I’d read an article about a new ski hill out west and drove from Edmonton. It was late October 1965, one of those absolutely torrential rainstorms. The road north from Squamish was still under construction and you had to drive across the Daisy Lake Dam—just water everywhere. Eventually I came to a big dirt parking lot with foundations going in for the gondola barn. I asked about the boss and someone pointed me to a guy filling sandbags. I was just out of engineering school so I asked if there were any jobs available—he handed me a shovel. Whistler Creek was going wild and they had just poured the concrete. I worked construction; that was late October and I never saw the peak of the mountain until early December. It was a stormy year.” 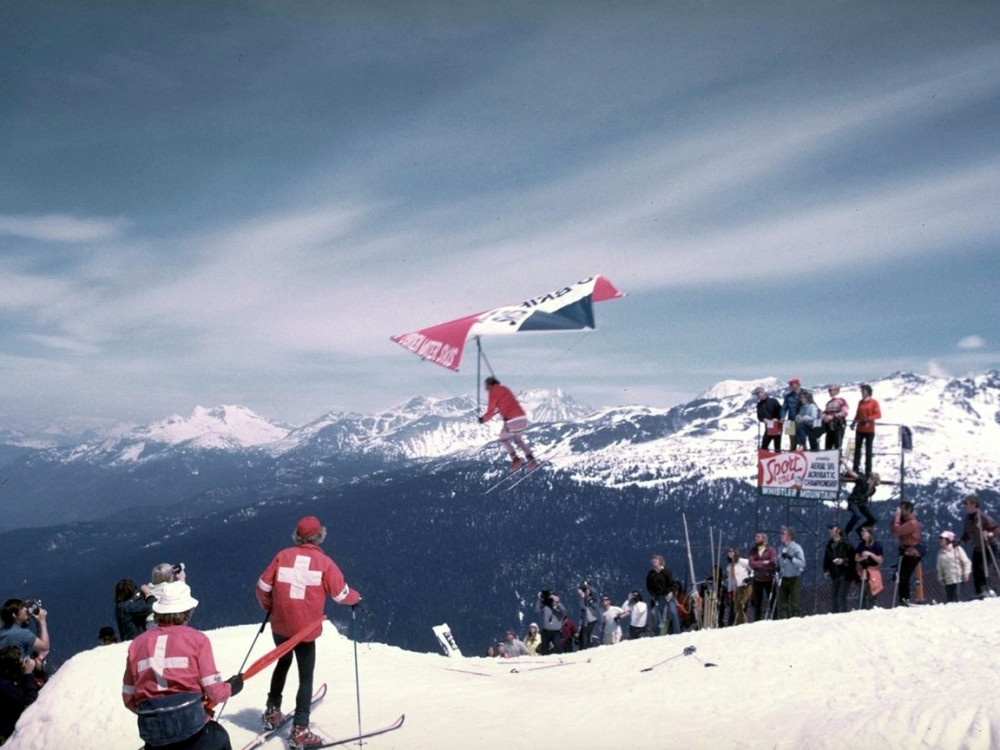 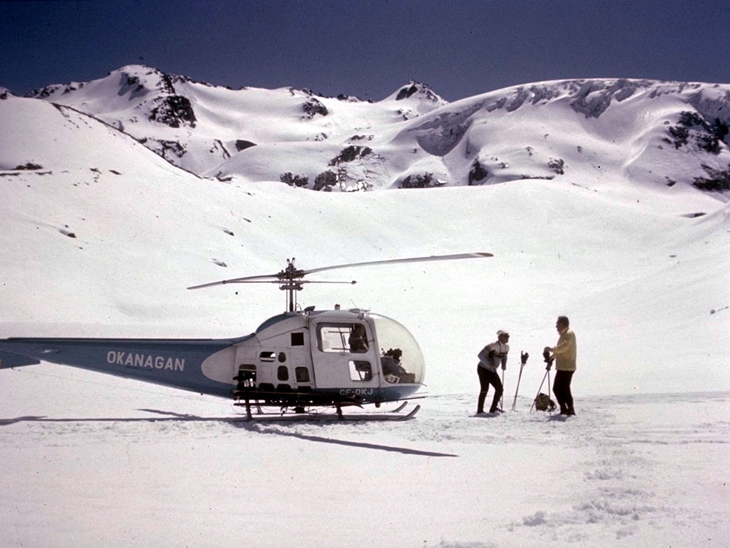 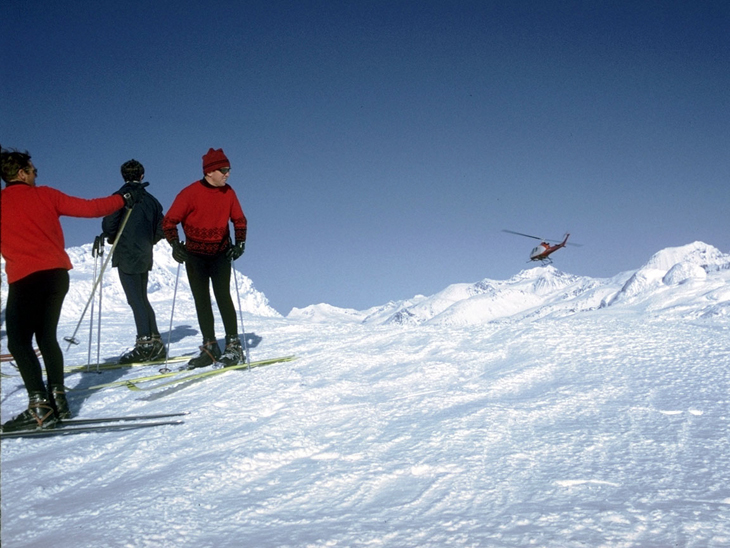 SNOW DAYS
“The next year I ended up running the grooming. We had one snowcat and a 450 John Deere tractor with wide tracks that we used mostly for clearing snow out from under the lift towers—Red Chair was built too low. We’d clear a path and in a few days the wind and snow would fill it back in. We got a lot of snow that year, the T-Bar opened in mid-January, but only for a couple of weeks until it was buried again.”
“One time I got a call from the RCMP—they were transporting a prisoner from Pemberton and were trapped in the snow. They needed to get somewhere to secure the prisoner, so I had to pick them up in the snowcat and drive them all to Function where the Malloch and Moseley Logging company offices had a secure room they could lock him in. I remember passing by cars that were totally buried. All you could see were the aerial antennae sticking up.” 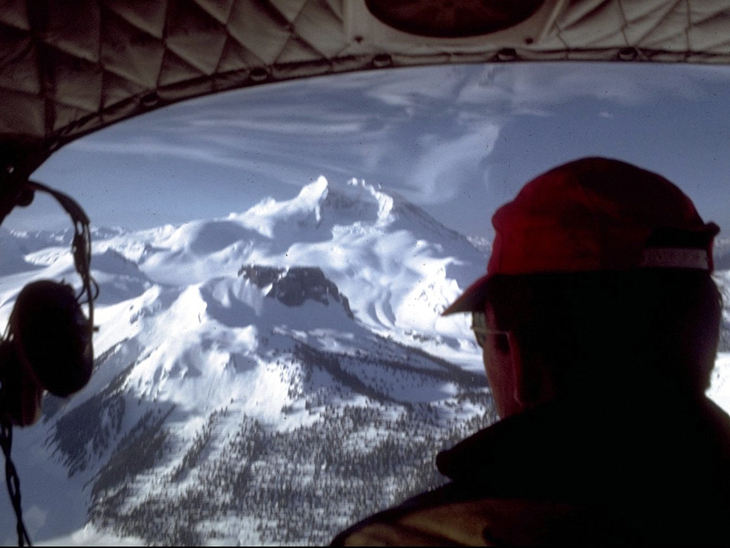 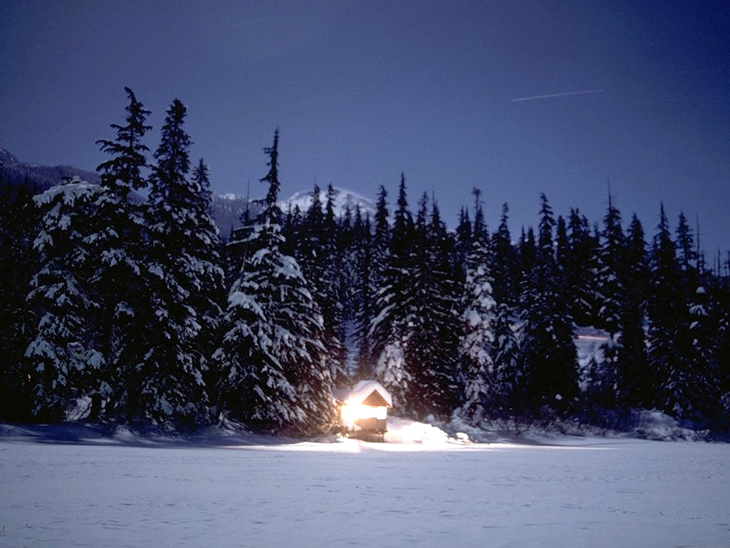 OPENING DAY 1965
“Whistler Mountain opened officially in mid-January. I had been building the upper T-Bar and turned an ankle, so that day they had me at mid-station of Red Chair yelling at people to keep their tips up. I also had to keep people on the upper mountain as the runs below Midstation had been cut but not cleared and were covered in fallen logs just below the snow. It filled in eventually though. That opening season was pretty dicey, except on weekends when things would liven up. There weren’t many facilities and not a lot of accommodation, Highland Lodge and Cheakamus Lodge and that was it maybe. From Vancouver, the drive up could be anywhere from three hours to over half a day.” 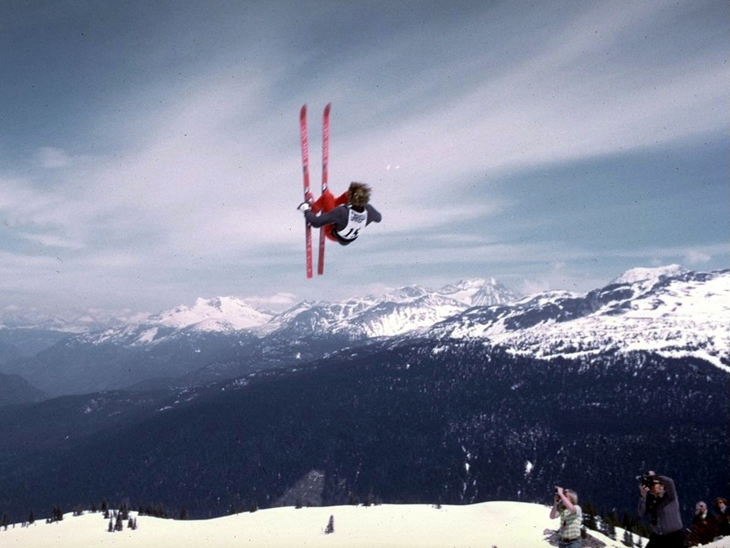 MILLION DOLLAR TURNS
“Our favourite run was to climb up Little Whistler, down to the Saddle and hike around to the south side of the Peak, looking down at Cheakamus Lake. Then we’d drop into the main bowl off Upper Highway 86. One Friday the thirteenth, there was a huge avy in there that cleaned open some space in the trees below, and you could ride that path, then follow the creek bed under a tree and go left and down through big timber until you’d hit the logged area and out. It was 5,000 feet of untouched. It was interesting because I showed some slides at the museum last year and there was one of the tree that had fallen over the creek bed, and as I was explaining the run, a young snowboarder kid in the audience came up, a little bit shocked, and said, ‘We go right there.’” 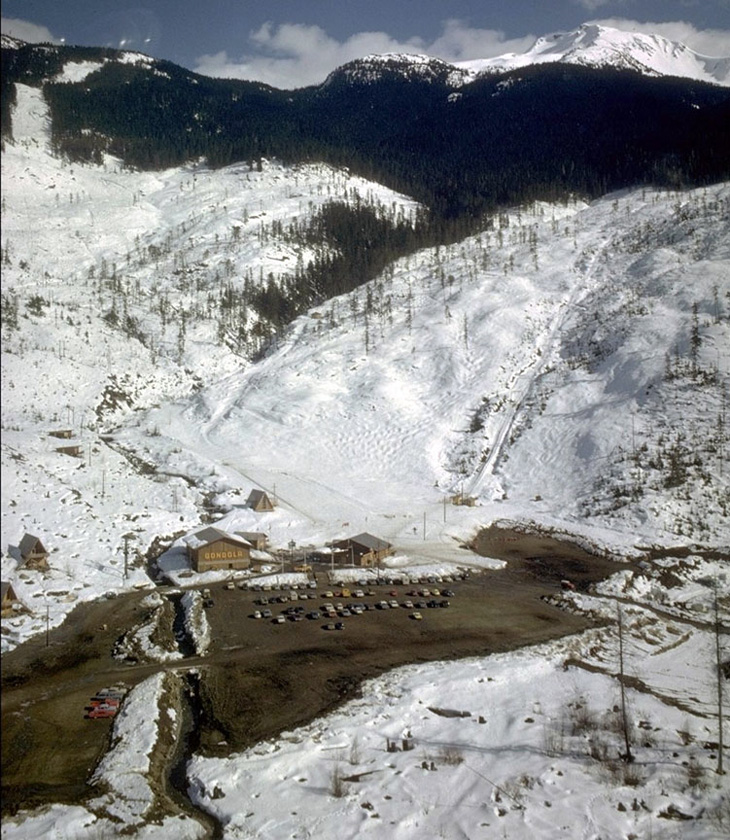 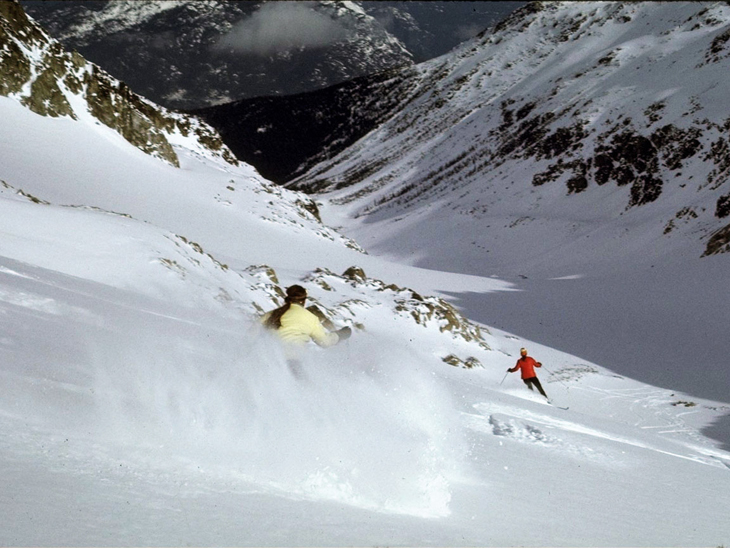 MARKETING 101
“Heli skiing started in 1967/68: Pacific Ski Air working with Okanagan Helicopters. I was a guide and the owners weren’t around on weekdays. Our main drop-offs were Trorey, Tremor, Decker and the Blackcomb Glacier. Two drops and then we’d drop you at the Peak for glory turns down Shale Slope while the whole ski hill watched. [Peak Chair wasn’t built until 1986 – editor.] On a sunny day we’d ski down to the bottom of the Gondola and walk up and down the line yelling, ‘who wants to go heli skiing?’ That was marketing, we’d get people, but the locals would just hike.” 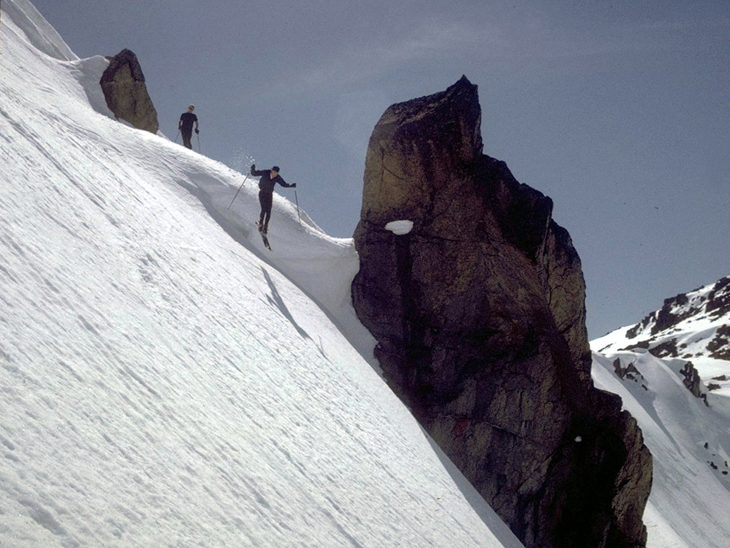 BLACKCOMB
“When Blackcomb first opened there were no dual mountain passes available so a lot of locals stayed with Whistler. Doug Wylie, Lindsay Wilson and I went up on some of the early days and it was wild—really great fall-line skiing. The runs were much more fun back then, they hadn’t harmonized them yet so you would catch huge air off the road crossings. Now it is all smoothed out. They also had a lot of gladed areas, Gandy Dancer [Now called Ross’s Gold – editor] used to have a lot of trees but a big windstorm came through one winter. All the trees left standing were no longer protected by other trees so the winds flattened everything.” “What worked for us on Blackcomb was there was hardly anyone there at first, and before the high speed chairs came in it was fifteen minutes faster to get to the top than if you were uploading on Whistler, so you could get a lot of good vertical. And every time a new lift went in it was explore time, places we used to have to hike to were now immediately available.” 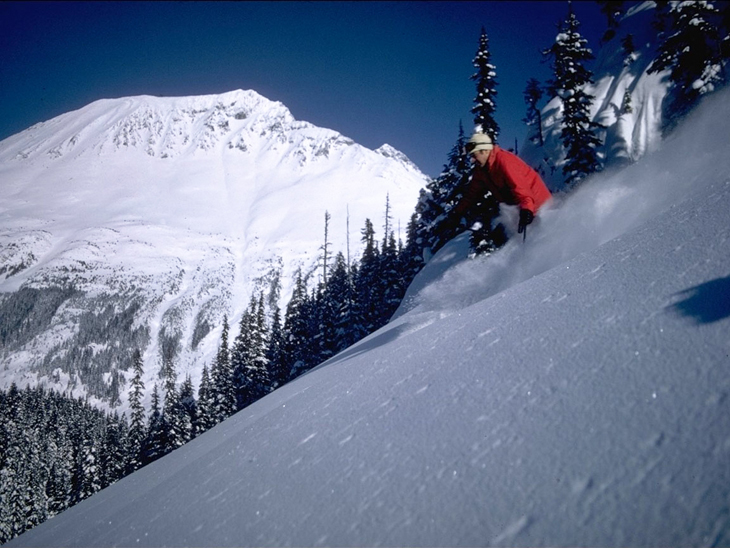 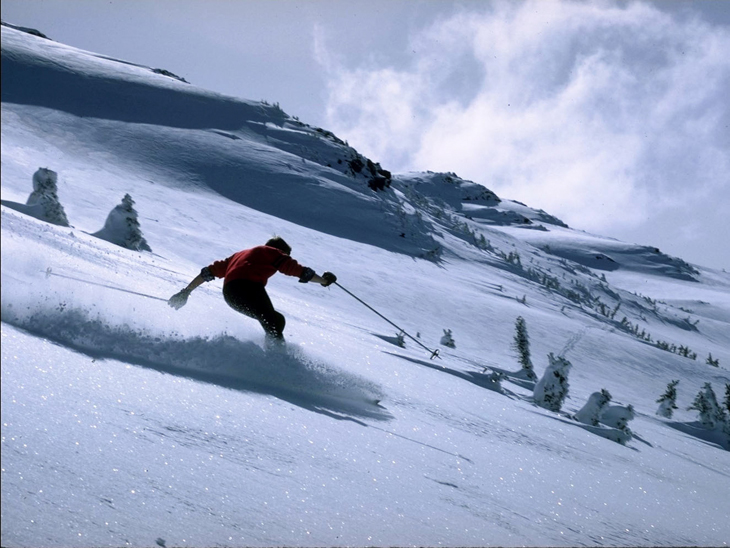 RAIN TO THE TOP
Ironically, it was a terrible snow year that really helped to boost Whistler’s popularity as a ski destination worth the trip. “I think it was 1970. We got rained out, but the base stayed up top. All the Vancouver and Seattle areas were fully washed-out with no base, and ours was the only one that stayed, so when the snow came we were the only option with a base and people started coming up. I guess that was our first year of attracting a real international crowd. A decade later, the first year that Blackcomb opened, it was another rough snow year. There was no 7th Heaven yet, so you couldn’t access that extra elevation. We still fared better than anyone else though.” 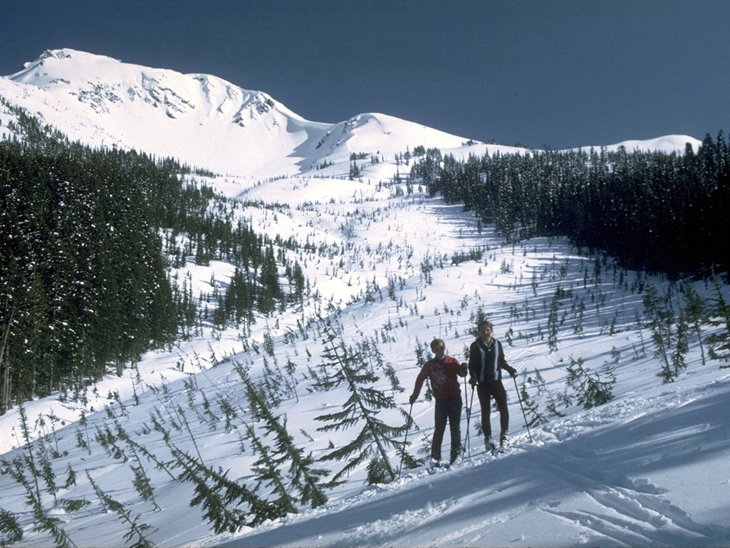 THE MERGE
“When the mountains merged I think it was good and bad. It was good to combine marketing efforts, but one thing I miss is Blackcomb leant itself much better to First Tracks Breakfast because when they let you out you’d have 5–7 runs that have a steep enough pitch for a 30 to 40–centimetre day. One of my best First Tracks ever was with my nephew and my son, and by 11 a.m. we had 20,000 feet of vert—all powder—just on the main runs. Depending on when the groomers had been through we’d have 15 to 40–centimetres of fresh on top of groomed. These days, the merge is good because people come here and have two hills to choose from. And with the PEAK 2 PEAK, a lot of us thought it was so stupid and of course now we all use it. It really helps if you have a bad snow year down low.” 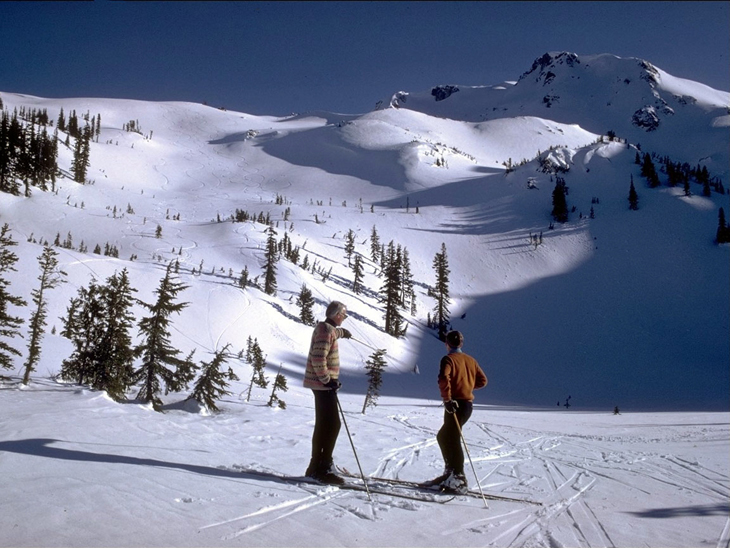 WHISTLER KIDS, MOUNTAIN LIVING
Vivien Jennings: “I arrived in November of 1966. It was pouring rain, then snowing and I didn’t see the Peak until Christmas Day. Cliff and I met at a pyjama party at the Cheakamus Inn in 1968. After we got married, we ran the Highland Lodge from 1970 to 77. Things were picking up by then. We started having children and we’re still here. We might be the longest consecutive residents; Cliff always said he wasn’t going to give up skiing, so I said ‘once you’re 70, we’re leaving.’ But when he turned 69, we started getting grandkids in Whistler…”

Cliff: “Now I look forward to getting up the hill with my grandkids. That’s my bucket list, to ski with all my grandkids. So far I have with 7 out of 8. Not bad.”