For Eric Savics and Danny Hagge, their love for wood has deep roots. Sitting on top of giant, thick-cut slabs of raw-edged timber, the lifelong friends begin reminiscing. Stories of their teenage years skateboarding on Vancouver’s North Shore mix in amongst the growling sounds of saws and the smells of fresh cut cedar and wood smoke

“I built a lot of ramps when I was a kid,” says Savics. “Just plywood attached to whatever we could find, a log or whatever. I guess you could say that was my first introduction to working with wood.”

“We would just build the most ghetto, horrible stuff,” says Hagge, the son of a Squamish builder. He talks of his passion for woodworking, and how it had deepened in high school, when he’d spent all his free time in shop class. Eventually Hagge shared the finer points of woodworking with his friend and after high school, went on to work as a carpenter. With the money he was earning, Hagge bought a small chainsaw mill and began milling as a hobby on the weekends while roofing during the week. “I was literally framing roofs and watching arborists drop trees,” he says. “I’d yell down, ‘Hey, what are you doing with that log?'”

The seed for Vancouver Urban Timberworks was planted.

Typically, after an arborist fells a tree, it is bucked into firewood or thrown into a wood chipper for landfill. That didn’t sit well with Hagge, who was about 21 at the time and living with Savics. The two began scheming ways to turn a passion for wood into a business built on reclaiming that wasted timber.

“You’d see 30-foot clear, four-foot-wide cedars being cut up for firewood,” Hagge says. “Watching that stuff go to waste was horrendous. As a wood worker, it really sucked. That’s really what drove us to start sawmilling.”

“We thought about the number of arborists from Hope to Pemberton,” Savics says. “And that must mean there’s a fair amount of urban timber coming down on a daily, weekly, monthly basis.”

They were right. A boom of new home construction, add-ons, and a surge of laneway houses was rocking the Lower Mainland. At the same time, drought-affected soil became less capable of securing large trees against heavy coastal winds. As a result, Vancouver alone has lost 50,000 trees since 1996. A whopping 96 per cent of those fell from private property.

“We realized that even one per cent of the waste in Vancouver would be enough to easily sustain a small business,” Savics continues. “The reason it works for us is that we sell slabs and wide-dimensional material, and we operate on a much smaller basis than a lot of the mills out there. It’s actually economical to whip out on our crane truck and pick up one or two logs at a time. Larger saw mills have to have such high volumes of raw logs coming through their plants to sustain them. Sometimes the scale is so large, that not operating for several hours can be detrimental.”

Vancouver alone has lost 50,000 trees since 1996. A whopping 96 per cent of those fell from private property.

Since launching in 2010, Vancouver Urban Timberworks (VUT) has grown from weekend hobby to a business that includes a woodshop in North Vancouver, a sawmill in Squamish and partnerships with tree services and municipalities across the Lower Mainland. With a growing list of customers that includes furniture builders, cabinet makers, artisans, timber framers, contractors, carpenters, architects, interior designers and woodworkers, VUT expects to bring on up to six fulltime employees in the coming year.

VUT provides a free pick-up service that has proven to be a win-win for all parties. The client and arborist save money, and Hagge and Savics walk away with raw material to be repurposed. This repurposing is at the heart of what VUT is all about, and since its inception, one of the main goals is to operate as environmentally responsible as possible.

“I think we’ll get to the point where we are a closed-circuit business, but at the same time we are trying to run a financially sustainable business as well, so we’re trying to marry the two and balance them,” says Savics.

In the past, Danny and Eric have made their own bio-diesel for their trucks, but due to the recent growth spurt, they’ve had to switch back to a B-50 blend, a bio-diesel product sourced through a supplier in Metro Vancouver. VUT is currently researching wind and solar power options to run its mill.

After renting yards, mills and kilns on an as-needed basis, VUT moved its milling operation to Squamish full-time, two years ago, while maintaining the wood shop in North Vancouver. Last spring, with the help of the Business Development Bank of Canada, VUT invested heavily in infrastructure and equipment, installed a state-of-the-art sawmill and became what Hagge proudly calls, “a real milling company.”

“This right here is our future,” he continues, waving his arm towards the yard. “There’s only a certain amount of money you can make building slab tables, and we always wanted to get into the supply side of things. We want to supply the woodworkers. It’s all locally sourced, no importing from overseas. We’re reusing and recycling the stuff that would otherwise be just firewood or wood chips in a landfill.”

“And just look at this stuff,” Hagge adds, slapping his palm on a huge slab of planed cedar. “It’s beefy, it’s strong, and it’s got a lot of character. It’s just beautiful to look at. It’s got personality.”

And personality is hard not to love. 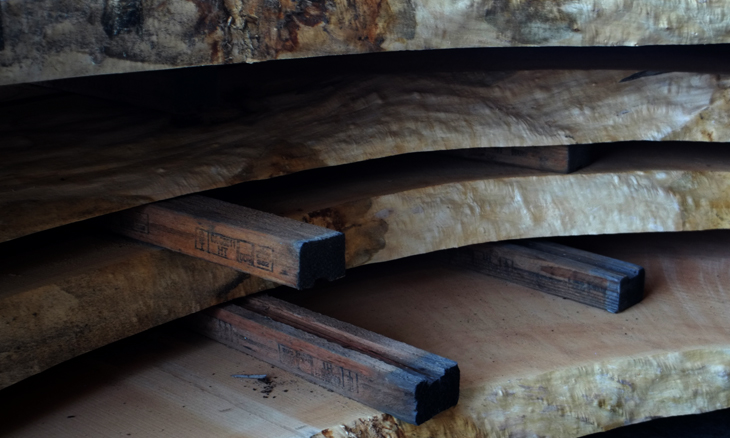